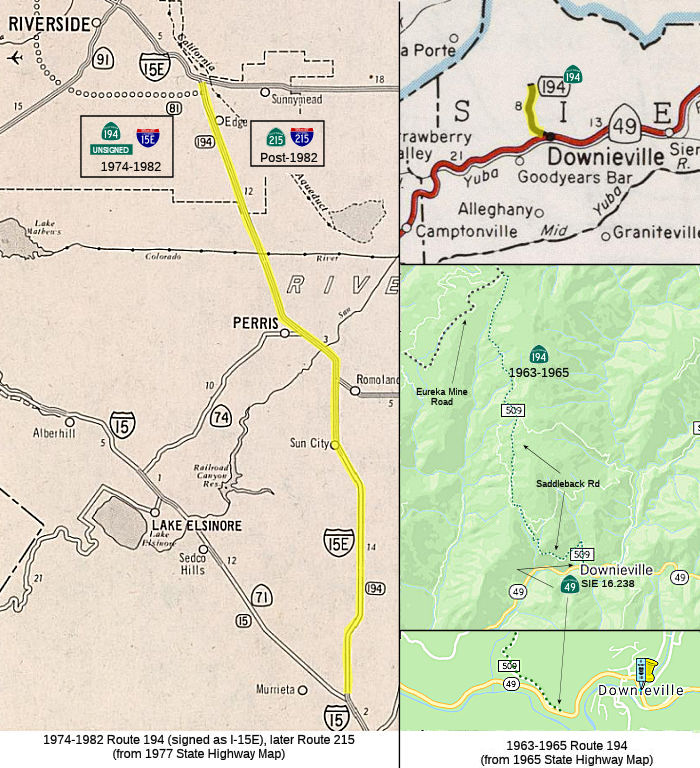 As defined on July 1, 1964, Route 194 ran from Route 49 near Downieville to Eureka Mine Road near Saddleback Mountain.

In 1974, Chapter 537 redefined the route: "Route 15 near Temecula to Route 15 near Devore via San Bernardino and passing near Riverside." This routing was signed as I-15E (Route 194 was created because legislatively one could not have suffixed routes). The 1974 renumbering was concurrant with the creation of a new definition for Route 15 to the west.

Some significant history of this route (as I-15E) is discussed under I-15.

The 1964-1965 routing with the number (near Downieville) was LRN 36. Scott Parker on AARoads provides some interesting history on this segment:
(Source: Scott Parker (SParker) on AARoads, "Re: Former CA 194 north from CA 49 to Saddleback Mountain", 7/8/2019)

It seems that both LRN 30 and LRN 36 were exercises in "how to get to Quincy the hard way!" Since the corridor the Division of Highways really wanted, LRN 21 through the Feather River Canyon, was a long hard slog in terms of construction; the 1907-09-built Western Pacific main line occupied most of the readily available alignment in the canyon, and the state highway had to carve out a path for itself wherever the railroad wasn't. So in the interim any traffic from the Sacramento Valley to Quincy, then a significant lumber and mining center, had to go "over the hill" on LRN 30, which by all accounts was a treacherous oiled-earth road that crossed some severe topology -- but was still CSAA-signed as Route 24, a designation that was switched to LRN 21 as soon as that facility was completed. My guess is that LRN 36 was intended to be a logical extension of the "Gold Center" corridor that characterized Route 49 (and its various LRN iterations), since if it served Quincy, a major mining center, the route would have maintained its original purpose rather than surmount Yuba Pass and end up on the eastern Sierra slope. I'd go so far as to say that if LRN 36 had been completed to Quincy, Route 49 would have been rerouted over it and the remainder of LRN 25 east to LRN 83/Route 89 at Sattley would have seen a different SSR designation. But similar topological obstacles to the ones encountered on LRN 30 existed for a potential LRN 36 extension as well, so once the Feather River Canyon route was opened to traffic, and further plans for LRN 36 were dropped along with the decommissioning of LRN 30. Whoever owned/operated the now-defunct mine north of Downieville probably had enough political clout to ensure that the stub route was state maintained, so it remained on the books until '65.

In 1933, Chapter 767 defined the routes from "The Descanso-Temecula Road near Aguanga to Hemet" and "Hemet to [LRN 19] near Moreno" as part of the state highway system. In 1935, these were added to the highway code as LRN 194, with the routing: