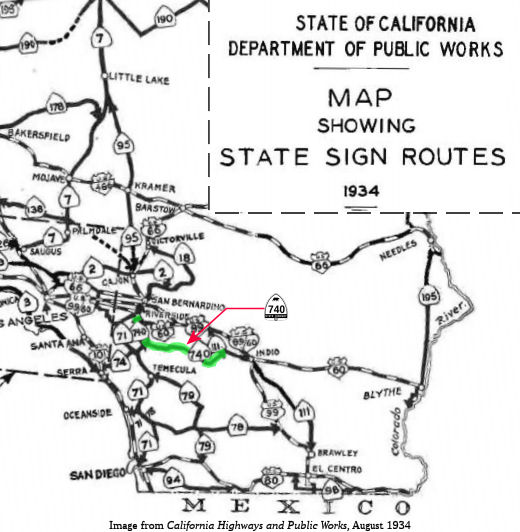 This number is not assigned to a post-1964 route.

The routing between Riverside and Perris was resigned as US 395 in around 1935.

On a 1934 Department of Public Works Guide Route 74 was announced as a highway running from US 101 near San Juan Capistrano east on the Ortega Highway to Route 740 in Perris. Route 740 was added as a Signed State Route from US 60 in Riverside east to Route 111 in Coachella Valley. US 395 was officially extended into California during a June 1934 AASHTO meeting. US 395 annexed what was to have been Route 740 on LRN 78 between Riverside and Perris. It also multiplexed Route 74 west of Perris before turning south towards Temecula on what previously had been Route 71. Route 740 east of Perris wasn't immediately consolidated into Route 74 as it appears east of Route 74/US 395 on a 1935 Goshua Highway Map of California. Route 740 east of Perris was annexed into Route 74 no later than 1938, as Route 74 appears as a singular route between San Juan Capistrano and Coachella Valley on the 1938 Division of Highways State Map.
(Source: Gribblenation Blog "California State Route 74; the Pines to Palms Highway", a/o 11/23/2019)