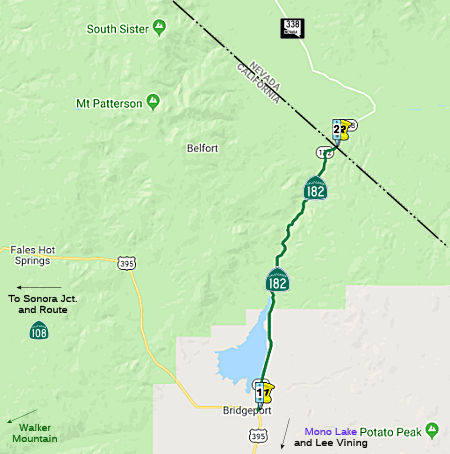 From Route 395 near Bridgeport to the Nevada state line via Walker River.

This route was LRN 96, defined in 1933. It appears not to have been signed before 1964.It followed the Sweetwater Road from Bridgeport to Nevada.

The corridor of LRN 96 and modern Route 182 is tied to the formation of Bridgeport.  The first documented European expedition of Bridgeport Valley was in 1827 via an expedition led by Jedediah Smith.  The prospects of the Bodie Mining District led to the establishment of Bridgeport in Bridgeport Valley.  Mono County was created by the California Legislature during 1861 with Aurora being selected as the original County Seat.  The 1863 Sage Brush Survey determined Aurora laid within the boundaries of Nevada which invalidated its Mono County Seat status.  Bridgeport was selected as the new Mono County Seat in 1864.  Bridgeport was located on the Sweetwater Road connecting the Bodie Mining District north via the East Walker River to the Wellington Toll Road.  The Sweetwater Stage Road was constructed by Mono County residents during 1873.  The only significant change to the Sweetwater Stage Road prior to being adopted as LRN 96 was in 1923 when the first five miles north of Bridgeport were relocated to less flood prone grounds during construction of the Bridgeport Reservoir.  A survey to modernize LRN 96 to the standards set by NV 22 was also conducted.  The Bridgeport Reservoir had additional regulations put in place that would allow LRN 96 to be straightened through old overflow flats.  In 1956, aan 8.2 mile segment of the highway was reconstructed as part of FAS 580.  The straightening of LRN 96 brought the highway up to modern standards and saved 20 minutes of travel in the Bridgeport-Yerington corridor.  A second phase of the project included surfacing the rebuilt 8.2 miles of LRN 96.   During the 1976 Nevada State Highway Renumbering NV 22 was renumbered to NV 338, which served as a continuation of Route 182.
(Source: Gribblenation Blog (Tom Fearer), “California State Route 182 and the Sweetwater Road”, 11/2021)

“from [LRN 2] near Orange to Orange County Park.”

The routing ran along Chapman from Main Street to Orange County Park. In 1957, Chapter 1911 amended the definition to begin at "[LRN 43] near Orange", and it had this definition until 1963, when it was included as part of Route 22. This segment was deleted from Route 22 in 1965 and is no longer part of the state highway system. It ran along Chapman Avenue. It appears to be present-day Orange County Sign Route S25.