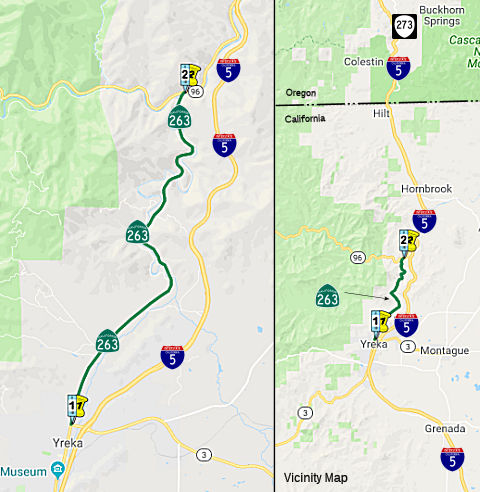 From Route 3 near the north city limits of Yreka northeasterly to Route 96 near the confluence of the Shasta and Klamath Rivers.

In 1965, Chapter 1401 defined Route 263 as “Route 96 near the confluence of the Shasta and Klamath Rivers northeasterly to Route 5 near Klamath River Bridge.”

In 1968, Chapter 282 swapped a portion of the route with Route 96: “Route 96 near the confluence of the Shasta and Klamath Rivers northeasterly southwesterly to Route 5 near Klamath River Bridge the north city limits of Yreka.”

In 1972, Chapter 1216 swapped the endpoints: “Route 5 near the north city limits of Yreka northeasterly to Route 96 near the confluence of the Shasta and Klamath Rivers.” 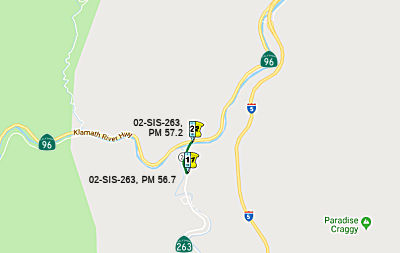 In July 2016, it was reported that a historic but deteriorating 85 year old bridge crossing the Klamath River on Route 263 is proposed for demolition and replacement in the near future, according to Caltrans documents. A Caltrans historic bridge survey determined that the Klamath River Bridge meets criteria to be listed in the National Register of Historic Places. As such, Caltrans must do some form of mitigation, but it could be as little as an informational plaque. The northernmost of a set of five bridges built in the 1930s on former US 99 through the Shasta River canyon, this piece of road was at that time “the most thickly bridged section” of any state highway in California. An alternate plan to blast tunnels through the rock formations was rejected. The bridge has an unusual 600 foot radius curve built into it, negating what would be sharp right angle turns on the north side. It is of “T-beam” construction, a less common variety of girder design associated with the 1930s. The original “window railings” were replaced with solid barriers in the late 1970s. The new bridge’s design and exact location is yet to be revealed but its construction is set to take out an old residence on the north bank of the river, the former Kamp Klamath (later called Richie’s Store and Gas Station) that served early day motorists.
(Source: Siskiyou Daily News, 7/15/2016)

In January 2017, the CTC approved for future consideration of funding a project in Siskiyou County that will replace the Klamath River Bridge on Route 263 near the city of Yreka (near the intersection of Route 96, making the scope 02-SIS-96, PM 103.00/103.6, 02-SIS-263, PM 56.7/57.2). The project is programmed in the 2016 State Highway Operation and Protection Program. The total programmed amount is $22,940,000 for capital and support. Construction is estimated to begin in Fiscal Year 2018-19. The scope, as described for the preferred alternative, is consistent with the project scope programmed by the Commission in the 2016 State Highway Operation and Protection Program.

In August 2018, it was reported that the CTC approved $18.6 million for a project that will replace the Klamath River Bridge on Route 263 from north of the Shasta River Bridge to Route 96 near the city of Yreka, and Route 96 east of State Route 263 in Siskiyou County.
(Source: Action News Now, 8/20/2018)

In December 2018, the CTC approved the California Department of Transportation’s (Department) request for an additional $4,600,000 for the State Highway Operation Protection Program (SHOPP) Bridge Replacement project (PPNO 3424) on Route 263 and Route 96 in Siskiyou County, to award the construction contract. This is an increase of 30% over the construction capital amount. This project is located at the intersection of Route 263 and Route 96 near the city of Yreka, in Siskiyou County. The project will replace the existing Klamath River Bridge, which is over 85 years old and has deteriorated extensively. The new bridge will be wider than the existing bridge to accommodate wider shoulders to meet current standards. The contract award status is pending approval of this request for supplemental funds. Construction would begin in Spring of 2019, would take 350 working days, and be completed in November 2021.

The Engineer's Estimate (EE) for this project was updated in May 2018 which included consideration of the project’s remote location. In addition, the Department requested an increase to the original programmed amount, to account for both the higher bidding environment and higher construction costs throughout the region. The Department discussed the bid results and compared bid prices with the contractors, including those who opted out of the bidding process. Although 15 contractors, sub-contractors and material suppliers obtained contract plans for the project, only two contractors submitted bids for this project. The contractors stated that this project includes many difficult, specialty contract items which only a few contractors can perform. Some of the difficult items on this contract include constructing the bridge foundation in a rocky, river environment and support falsework for an arch structure over a flowing river. The difficulty to construct this bridge, the bridge’s remote location and environmental constraints due to the proximity of the Klamath River, present added challenges and higher risks to the contractor. All these challenges and risks resulted in a limited number of bidders and higher contract bids. The EE was developed appropriate for the project including the challenging location of the existing bridge. However, the EE was still undervalued as the current trends were beyond expectations. While there are only two bidders on the project, the existing bridge is in an extensively deteriorated condition, and urgently needs to be replaced to ensure the safety of the traveling public. The Department has reviewed the bid results for possible mathematical or material unbalancing in accordance with 23CFR 635.102, and 23CFR 635.114. The bids appear to be mathematically balanced and there is no evidence of material unbalancing of the low bid.
(Source: December 2018 CTC Minutes, Agenda Item 2.5e.(4))

In April 2021, it was reported that Route 263 has been rerouted onto the new new Klamath River Bridge, north of Yreka. There will be intermittent traffic control and closures on both Route 263 and Route 96 throughout summer 2021 as work continues on the project. The old Klamath River Bridge is anticipated to be removed starting in June of 2021 and continue through July of 2021. The project is anticipated to be completed by the end of October 2021.
(Source: Caltrans District 2 FB Post, 4/28/2021)

In August 2021, the CTC approved a request for an additional $500,000 in Construction Support for the SHOPP Bridge Replacement project on Route 263 in Siskiyou County, to complete the construction contract. The project (PPNO 02-3424; ProjID 0200000586; EA 2E480) is located on Route 96 and Route 263 near the city of Yreka in Siskiyou County (02-Sis-263 56.8/57.2, 02-Sis-263 56.8/57.194, 02-Sis-096 103.1/103.6). The project will replace a bridge 8 miles north of Yreka, from 0.3 mile north of Shasta River Bridge to Route 96, also on Route 96, from 0.5 mile west to 0.2 mile east of Route 263. The project’s construction support was programmed for $3,100,000 in the SHOPP for delivery in 2021-22 and was allocated by the Commission in August 2018 for $3,100,000; G-12 funds in the amount of $510,000 was approved in March 2021.  The project was awarded in December 2018 with construction beginning in February 2019.  The project is expected to be completed in November 2021. The remaining budget is $137,000 and is insufficient to complete construction. The project is currently 85 percent complete. The project experienced various obstacles during construction that resulted in an increase to the construction support cost. At the start of construction, differing site conditions were discovered; as there was a discrepancy between the Digital Terrain Model (DTM) and field conditions on site. The DTM did not penetrate the vegetation well enough to capture the ground elevation. The inaccurate survey file created rework for the Surveys and Design team, and triggered a change order work for a cofferdam around the thrust block and additional environmental coordination with California Fish and Wildlife, National Marine Fisheries Service and Regional Water Board.  The cofferdam was not anticipated for this project as the thrust block was originally anticipated to be outside of the waterway. Adding to construction support cost, the contractor’s drilling equipment continuously broke down and delayed the drilling schedule approximately 7 months. Given the remote location of the project, and uncertainty of whether the equipment would be fixed timely, inspectors would remain onsite.  To address the delays, the contractor worked overtime and added extra shifts, which required additional inspection hours from the construction support crew. When the contractor commenced removing the falsework, the first column moved out of alignment. After a design review, it was decided that the contractor must rebuild the column. While reconstruction is the responsibility of the contractor, additional Department staff resources were required to analyze the column, inspect the work, and provide additional survey verification of the falsework and column forms. The COVID-19 pandemic has also impacted the resource use of the survey crew. Crews typically stay overnight in Yreka to maximize the time on the jobsite; however, lodging was unavailable which required the crew to return to Redding each day which is two hours away. The additional travel time extended the number of days the crew were needed on site, compounding the overall time spent on the project. These supplemental funds will be utilized to address the additional construction support costs needed as well as the 5-year mitigation plan.
(Source: August 2021 CTC Agenda, Agenda Item 2.5e.(6))

In November 2021, it was reported that the new $18 million Klamath River Bridge, a 300-ft. long, one lane in each direction, arch structure located north of Yreka, Calif., constructed by Golden State Bridge Inc. for the California Department of Transportation (Caltrans), was fully delivered on Oct. 1, 2021. The complex project dealt with many environmental hurdles, which required a unique falsework system envisioned and implemented by Golden State's Project Manager Paul Lukaszewicz, Superintendent Jim Banbury and Project Engineer Evan Huber to meet all concerns of the permitting agencies with no temporary structures in the flowing water. An engineered bridge removal plan also was required to dismantle the old structure and prevent debris from falling into the river. The work took place near the city of Yreka, a Caltrans District 2 initiative, that also widened existing roads for today's standards. The bridge is located at the junction of Route 96 and Route 263. Crews completed the new structure in 2020 and in 2021 realigned the highway to tie it in to the new bridge and removed the old structure. Challenges included extremely difficult pile installation due to high water table, loose overburden consisting of sand couples and boulders with 30 KSI bedrock below. There was an existing utility that interfered with the pile driving — a 60 KV electrical line that had to be relocated. The CIDH pile installation was extremely difficult as there were loose soils over the very hard rock, consisting of sand, gravel and big boulders. Beyond that, the bedrock was 30,000 PSI in water — it was the worst combination of everything for pile installations. The new bridge is west of the old one and its location improved turning radiuses and sight distances and lowered the existing grade considerably.
(Source: Construction Equipment Guide, 11/3/2021)