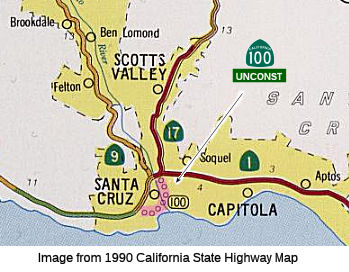 From the junction of Routes 1 and 17 to Route 1 west of the San Lorenzo River via the beach area in Santa Cruz.

This routing is unchanged from its 1963 definition. It was a proposed freeway loop routing through Santa Cruz. This route adoption was rescinded in August 1975. The route location was never determined. There is no local traversable routing.

Back in the 1960's, Caltrans proposed creating a freeway bypass of Route 1 along the Mission Street corridor. The Santa Cruz City Council endorsed a proposal which would have paralleled Mission Street to the north, cutting through some neighborhoods along the entire route. The nearby residents appealed this decision all the way to the California Transportation Commission, which sided with the residents and chose their alternative of an alignment on the northern outskirts of town through the recently-opened University of California Santa Cruz (UCSC). This is what is legislatively Route 100. However, UCSC strongly objected to this new alignment, and eventually the entire bypass issue was dropped.
(Source: Santa Cruz Streets, h/t Aaroads)

According to Scott Parker on AARoads, recalling friends whose families were lifelong Santa Cruz residents, in the late '50's: the city was pushing for a signed route that would expedite access to the beach from both Route 1 and Route 17 after Route 1 was moved a bit inland onto its current expressway/freeway alignment and away from downtown.  As Ocean Street, the original surface alignment of Route 17, was directly served from both routes, it was considered the logical place to start the loop.  The Division of Highways commissioned LRN 287 but tried to keep it as short as possible, not wanting to assume any more city street maintenance than was absolutely necessary -- thus returning it to Route 1 at Chestnut street, where the then-new Route 1 expressway segued onto city streets.  Santa Cruz wanted the loop to "wiggle" all the way down to the boardwalk, then return to Route 1 via Bay Street, a bit to the west.  After the number was changed to Route 100 after 1964, the DOH proposed a simpler loop -- down Ocean, over Broadway, and back up Bay, since they didn't want to deal with the streets along the boardwalk where active SP tracks featured daily street-running freights to the Davenport cement plant up the coast.  The city and DOH could never reach a final agreement, so the only active portion of Route 100 to exist were the Ocean Street ramps from the Route 1/Route 17 interchange; back circa 1969, while on a visit to the area, I actually saw a CA 100 milepost at the end of the SB offramp (don't remember the precise mileage figure, but it reflected the fact that the ramp was about a quarter-mile long).  It was definitely gone by the early 1990's.
(Source: Scott Parker (SParker) on AARoads, "Re: Unbuilt CA 100 in Santa Cruz", 4/20/2020)

This definition remained unchanged until the 1963 renumbering. It ran from present-day unsigned Route 84 on Ryer Island to present-day Route 160 (pre-1963 Route 24). This is present day Route 220.