In 1933, the Legislature amended the State Highway Classification Act of 1927 with Chapter 767 of the 1933 Statutes (PDF, 173 MB), adding 6,700 mi of county roads to the State Highway System (all classified as secondary highways). Highway construction funds were allocated equally between primary and secondary highways. The legislative barrier that prevented state highway funds from being used in urban areas was removed. 1933 also saw the creation of an eleventh district, with headquarters in San Diego.

Note: It is difficult to relate the specific text in the 1933 act with the routings today. Text shown in light purple represents the closest equivalent to current routings, if it could be identified. For more specifics, please visit the appropriate page for the route or LRN in question (information for the LRN is always at the end of a given route's entry page).

In 1934, the state began numbering non-Federal Highways with a "bear shield", shaped like a miner's spade and displaying a grizzly bear above the number. Signage was still done by the CSAA and ACSC.

The 1935 legislation also appears to have repealed a number of previously approved highways:

Most of the repeals were of authorizations for surveys; the routing was were actually added into the system at some point. Generally, Chapter 29 established the new highway system and repealed all the Chapters that explicitly established old routings and the previous incarnations of the highway department.

The following new highways and changes were made in the 1935 legislation (PDF, 140 MB). Please see the pages for an individual route or LRN to see the specifics of how the route was established in 1935 and the changes thereafter.

1937 saw the completion of the Golden Gate Bridge. Note that this bridge is not part of the state highway system; it was designed, constructed, maintained, and is still owned, by the Golden Gate Bridge, Highway, and Transportation District. The year also the completion of what became Route 1, also known as the Pacific Coast Highway. The route served /serves as an important tourist and commercial corridor. This is was California’s first complete north-south highway.

Within two weeks of the passage of the Freeway Law, the California Highway Commission approved the first group of freeway declarations involving thirty-four miles of highways. Among these was the Arroyo Seco Parkway, for which construction started in 1936.

1939 also saw the completion of a Statewide Highway Planning survey. The focus was on the rural state highway system. It inventoried the system, and presented traffic data to justify the contention that much of the system was deficient in terms of meeting current traffic needs. It also reported that 47% of the system was still not surfaced, many roads were becoming worn out, and hundreds of bridges suffered from structural deficiencies.

On December 30, 1940, the first freeway in the Western United States openedthe Arroyo Seco Parkway, now the Pasadena Freeway, Route 110. This project marked the beginning of the freeway era in the Golden State.

The implementation of gasoline rationing in Demember 1941 resulted in a sharp decline in gasoline tax revenues (up to 50%).

A Rural Highway Needs survey was completed. This indicated that the state highway system was underfinanced, 65% of the milage did not meet current design standards, and that projected traffic increases were expected to result in an additional 800 miles of roads being classified as inadequate by 1950. It estimated that it would take upwards of $443 million to bring the rural system to current standards.

In 1943, the legislature appropriated $12,000,000 for surveys and the preparation of plans and specifications, in anticipation of a post-war highway construction boom.

In 1944, the California Highway Commission recommended a major post-war highway construction program of 145 individual projects, at an estimated cost of $80,000,000.

The following is a good map of the routings in Los Angeles at this time: 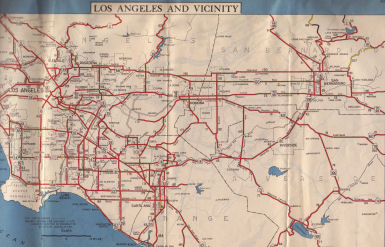