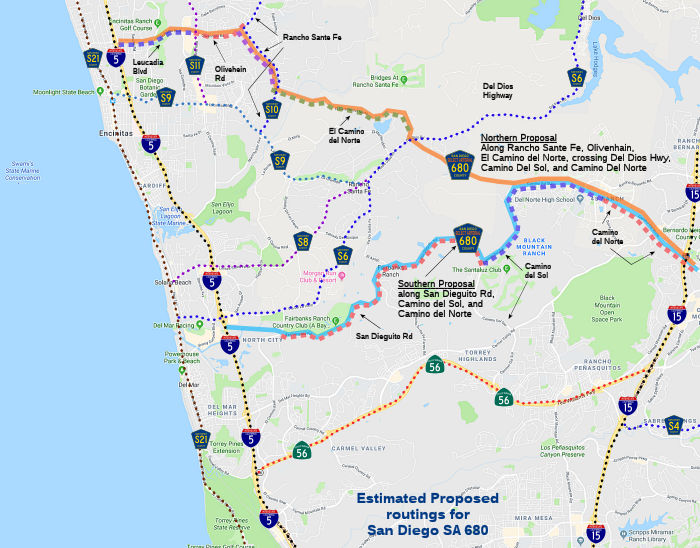 There appears to be no clear routing. One proposal seemed to be:

From I-5 at Rancho Santa Fe Road in Encinitas, then east through Olivenhain, across the San Dieguito River at Del Dios Highway, to I-15 near Rancho Bernardo.

This would imply a routing approx. allong Leucadia Blvd, Olivenhain Rd, Rancho Sante Fe, El Camino del Norte, across Del Dios, and then cutting a new roadway S to Camino Del Norte. But other articles note a crossing of the San Diaguito River about 3 mi W of Lake Hodges Dan, or a connection of the Del Dios Highway to the end of San Dieguito Road in Fairbanks Ranch, which would move the route S of County Sign Route S6 and eliminate any crossing of Del Dios Highway.

County Sign Route 680 is not part of the County Sign Route system, but instead refers to Select Arterial (SA) 680, an internal designation in San Diego County. It was first planned around 1962. For decades, county planners wanted to build another road linking I-5 and 15, and there was discussion in the 1980s and 1990s about a highway between Encinitas and Mira Mesa. A specific routing appears not to have been determined, but in 1990 it was reported that it was planned to be a four-lane, 1 1/2-mile-long road that will cross the San Diaguito river and connect the Del Dios Highway to the end of San Dieguito Road in Fairbanks Ranch.

Prior to 1988, SA 680 was envisioned crossing the San Diaguito River to the east of the C.W. Harris Archeological Site (the oldest archeological site in San Diego County, about three miles west of the Lake Hodges Dam), where a dirt lane already exists. But after intensive lobbying by the Rancho Santa Fe Association, the county adopted a route that places the road several hundred yards downstream, smack atop the Harris site. Construction of a curving bridge off the Del Dios Highway would have a major, unmitigable impact on the site, according to a county-commissioned report completed in September 1990. The owner of the land, Sunland Communities, wants to build Rancho Santa Fe-style estates in the area and would prefer that the road be moved back upstream, away from the archeological site, where it was originally planned.
(Source: San Diego Reader, September 1990)

In 1989, Encinitas erased the proposed SA 680 from its planning books. The highway would have crossed Encinitas and Rancho Santa Fe, forging an east-west link between I-5 and I-15 that crossed Del Dios Highway. Dropping SA 680 from city plans prompted a lawsuit from the Rancho Santa Fe Association. The association protested that, without the highway, commuters would flood their narrow roads trying to find a route between Del Dios Highway and the coast. In 1990, a San Diego Superior Court judge ordered the city to study to do a traffic study on the implications of wiping out SA 680. Completed in 1993, the study concluded that Rancho Santa Fe Road should be widened to four lanes between Olivenhain Road and El Camino del Norte, with road improvements also added to El Camino del Norte as it cut through Rancho Santa Fe. When this study was completed, the association again sued over the flood of commuter traffic it expected on its rural roads. The county, which had long intended to build SA 680, joined the association in the lawsuit. But the county dropped the suit a few months later and scrapped its own plans for the highway, at the urging of Supervisor Pam Slater, a former Encinitas City Council member.
(Source: San Diego U-T, 2/11/2001)

The route was deleted from San Diego general plans in 1989 and 1993; funds were later reallocated to Route 56.

Continued heavy opposition along the coast drove the county Board of Supervisors to abandon SA 680 in 1995, although Camino del Norte is still on the books as SA 680.

There was a subsequent plan dubbed the Son of 680 that turned the highway to a north-south alignment; this also was shelved.

In 2005, the San Diego Association of Governments included the idea of a new freeway, dubbed "Grandson of 680", in a countywide transportation plan update due in March 2006. That update included a discussion on a limited-access route east of I-15 as well as a proposal to put a new north-south freeway between I-5 and I-15. To help sell a route east of I-15 that would not promote urban sprawl, SANDAG planners envisioned a limited-access highway with a minimal number of on- and offramps to help prevent the establishment of gas stations, fast-food restaurants and new homes. County Supervisor Bill Horn also supported a third north-south freeway east of I-15. He called for an advisory vote on the matter in 2002, but the issue never made it to the ballot.
(Source: San Diego U-T, 5/23/2005)

Camino Del Norte has been extended west of the Camino San Bernardo Overpass for a considerable distance. As of May 2009, it now connects at the city of San Diego border with Camino Del Sur into the Del Sur neighborhood and bends south to connect with Route 56. The extension must have been completed in 2006 or so when Del Sur was being developed.