This route was defined in 1968. Portions of this route are the former routing of US 101. Portions are the former Carlsbad Freeway, built between 1950 and 1953. specifically, the portion between La Costa and Palomar Airport Road. There was also a Business US 101 in this area.

Some of the S-21 shields along old US 101 have been painted over with the California Poppy. 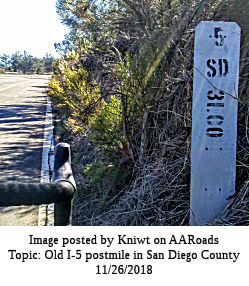 In September 2009, it was reported that the Encinas Creek bridge was to be replaced in January 2010. Built in 1913, the Encinas Creek Bridge handles southbound traffic along Carlsbad Boulevard and is located about a half mile south of the Palomar Airport Road intersection. The bridge has low, concrete railings and a graceful, arched look. The bridge's exposed reinforcing bars have become "heavily corroded," and one of its two lanes ---- the western one ---- was shut down more than a year ago after the bridge failed a state Department of Transportation safety inspection. Plans call for the bridge to be replaced with a span that's 26 feet narrower, but 15 feet longer and two feet higher. The new span will be built off-site and trucked to the area to reduce the amount of time that Carlsbad Boulevard will be closed.
[Based on an article in the North County Times, "CARLSBAD: City to take out Encinas Creek bridge starting in January", 2009-08-31]

Total mileage: 24.74 mi. At one time, the entire route was designated as Business Route 5; presently, only the old Highway 101 portion is Business Route 5. There are a few postmiles dating from the post-1964 renumbering showing the route as Route 5 (from when US 101 had been renumbered as Future I-5, but I-5 was still under-construction. The picture to the right was posted on AAroads by Kniwt.