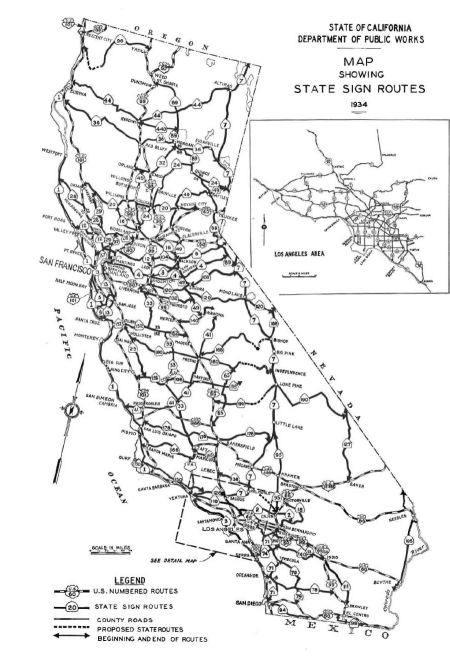 Legislative routes were initially established with legislation in 1909, when routes 1 through 25 were defined. They have been extended by legislative acts over the years. The original legislative numbers were never posted along highways, but were used on state highway maps. While the state had one of the best highway marking programs in the country, originally the roads were marked primarily with the old trail signs – such as “Lincoln Highway”, “Old Spanish Trail" and “National Old Trails – rather than numbers.

Before 1934, the only routes that were signed in California were the US Highway routes (signage of these started in 1928). Once US Highways began to be signed, the state Division of Highways met with representatives of the auto clubs to adopt a route marker for state highways. In late 1934 the new program for signing state highways was announced. The group selected a "bear shield" design, which resembled a miner's spade and displayed a grizzly bear taken from the California Bear Flag. They featured black figures on a white background, and were originally porcelain enamel on 18-gauge steel. The original intent was to have 3 signs per mile. After the state assigned sign route numbers to routes, they provided funds tothe auto clubs to actually sign the routes.

The initial route numbering for state-signed routes was as follows:

There are some that see additional patterns. It was noted on AARoads that many of the laterals in the central and southern part of the state were three-digit, ascending from L.A. northward until about Visalia, then descending again to about Stockton. Many of the routes had nearby routes with a difference of 12. So north of Route 126, you'll find Route 138, then Route 150 (today's Route 246/Route 154/Route 192). You'll see Route 166, Route 178, and Route 190; Route 152 and Route 140; Route 132, Route 120, and Route 108. But not everything fits this pattern, so this could just be the mind finding something.
(Source: AARoads Discussion - CA–118 and CA–126, April/May 2019)

As routes got added, an attempt was made to follow this, although it soon fell by the wayside, except for the even/odd usage.

As the state highway network grew, and existing roads became longer, each new segment was given its own number (but was an extension of the original signed route). This resulted in some state highways having up to 13 different legislative route numbers along their length. For example, Santa Monica Boulevard from the junction with US 101 was listed as Legislative Route Number 162 [LRN 162], State Signed Route 2 [Route 2], and US 66.

In 1959-60, all the old "miner's spade" "Grizzly Bear" highway markers were replaced by plain white "miner's spade" shields, without the Bear. This was the exact design of today's shields, except white in color instead of green. There are a few of these shields still around; in particular, around Route 126 in Ventura and the older portions of Route 134 in Glendale.

In 1964, all state routes were renumbered to bring their legislative route number in sync with their signed route number. There was also a renumbering to retire some US highway numbers, and to sign with Interstate route numbers [There is a good article on this renumbering at http://www.gbcnet.com/ushighways/history/1964_hwy_renumbering_contents.html].This removed any remaining semblance of order in the numbering of state highways. The routes were signed with a green shield, still in the shape of a miner's space, but lacking the grizzly bear.