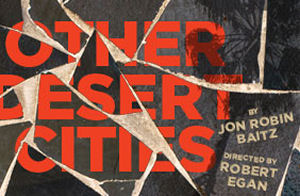 If you are like me, when you hear the phrase “Other Desert Cities”, you think of its use as a control city on Eastbound I-10 at the Route 111 cutoff for Palm Springs. But “Other Desert Cities” is perhaps better known as the combo-comedy-drama play written by Jon Robin Baitz that is just finishing up its run at the Mark Taper Forum. We saw it there last night, and it was a spectacular way to cap our 2012 theatre going experiences.

The title refers to a line from a character in the play, where he muses about remaining on the freeway and going to those “other desert cities”, as opposed to getting off to visit his parents in their Palm Springs home. This is where the play primarily takes place: in the Palm Springs home of Lyman and Polly Wyeth, which strikes me as one of those homes on the edge of the hills just off Palm Canyon in downtown Palm Springs. (You know the type of home: all stone flooring, light wood furniture, clean 1950s lines, sliding doors to spectacular views). Lyman is a former actor from Hollywood action-adventures, and Polly (together with her sister, Silda) is a former Hollywood writer of a series of teen comedies. Lyman and Polly are big in the Reagan-era GOP (i.e., friends with Nancy and Ronny, Barry Goldwater, and the Hollywood GOP elite).

As the play opens, Lyman and Polly are being visited by two of their three children just before Christmas: Trip, a writer and producer of a courtroom TV show in Hollywood, and Brooke, an author. The third child, Henry, had left a suicide note and disappeared many years earlier (Vietnam-era), after a group with which he was involved bombed an Army recruiting station, killing the janitor. Polly, after many years in the hospital due to depression, has just written a new book and is using this as the opportunity to share it with her family before it is published. Silda is also present, having just gotten out of rehab for a long-standing alcohol addiction. The first half of Act I is introducing us to this family. Through some very funny dialogue, we learn their dynamics; we learn how Henry’s death affected Brooke, and we learn of the political sparring that takes place between the liberal children (Brooke and Trip) and their Republican parents. In the latter half of Act I, we learn what the Brooke’s new book is actually about: it is not a novel but a memoir of her life with Henry, and the story she constructed (with Silda’s help) about Henry’s relationship with her parents and his death. It presents a very unflattering picture of her parents, and would destroy them with their GOP cronies. This drives a wedge between Brooke and the rest of the family, and this is where the act ends.

(Warning to Sailors: There be Slight Spoiler Dragons in this Paragraph) In the second act, which occurs later that evening, we see the aftermath of the disclosure: a heated disagreement over the book, with Brooke and Silva on one side, and the rest of the family on the other side. We learn of Silva’s involvement in writing the book, and why she did it. More importantly, this act suddenly turns from the comedic to the dramatic when Lyman opens up on what really happened to Henry, and how he left the family for good. This truly shocks the children, and pretty much leaves everyone in tears. The story closes with a scene a few years later where Brooke relates what happened to the family afterwards.

(Warning to Sailors: There be Greater Spoiler Dragons in this Paragraph) This was truly an enjoyable play. The bantering and sparring in the first act was delightful: there were great jokes and jabs at the 1980s Republican establishment, as well as the Palm Springs culture of the era. The characters came off as reasonably realistic. I truly loved the portrayal of Brooke, who was wonderfully sardonic and straightforward (she kept reminding me of someone — later I realized she was reminding of Barbara M., who used on be on one of my evaluation teams, and who currently works at the East Coast outpost of Circle A Ranch). The drama of the second act was riveting. Lyman’s story about what happened to Henry made me think of my brother, who was a long-haired hippie of roughly the same age as Henry in the story. When my brother died, I kept thinking he had just run away and disappeared. Did he? One never knows. In any case, the performances here were spectacular from all of the actors involved.

All of the actors in this production were just great. I was particularly impressed with Robin Weigert as Brooke Wyeth. She just came across as realistic, someone who I could truly like and have fun talking too. She also got into the emotions, truly breaking down during Lyman and Polly’s relevations in the second act. It was a spectacular performance.

Speaking of Lyman and Polly: the parents were played by Robert Foxworth as Lyman, and JoBeth Williams as Polly. Foxworth gave a great performance as Lyman — personable but hard in his beliefs, protective of his family and wanting peace above anything. He didn’t strike me as the Foxworth I vaguely remembered from Falcon Crest or the Elizabeth Montgomery piece on Biography. Williams was also strong as Polly, doing a great job as a Republican society woman who wanted to protect her position and friendships. You could see that she really loved her daughter, but there was an underlying tension.

Rounding out the cast were Michael Weston as Trip Wyeth, and Jeannie Berlin as Polly’s sister, Silda Grauman. Weston’s Trip was a good foil for his sister, and you could see him having fun with the family dynamics. Berlin’s role was much smaller — she was more an observer of the proceedings, with the occasional sardonic insight and satiric barb.
(All actors are members of Actors Equity)

The production was directed by Robert Egan, who did a wonderful job of making this family appear realistic. Through his direction, these people came across as folks you might run into shopping on Palm Canyon. The combination of quality actors and quality direction made this a joy to watch.

Turning to the technical: The set, by Takeshi Kata, was spectacular (you can see an image here). You truly felt you were in a desert home, with the sandy cactus garden, sliding glass doors, wonderful stonework, and clean-crisp 1950s lines and furnishings. I wanted to live there. This was augmented by wonderful lighting by Lap Chi Chu. Although the basic stage lighting was primarily white and light blue, the background lighting was breathtaking. Behind Kata’s house was a backstructure of the San Jacinto Mountains, behind which was a cyclorama providing the image of the sky. This started out as a morning sky, and by the end of the play was a wonderful evening sky. The costumes by Alex Jaeger did a great job of reflecting their time and period, and the sound design by Adam Phalen truly blended into the background. There was a credit for Karl Fredrik Lundeberg, but I truly have no recollection of music in the play. James T. McDermott was the production stage manager, and Susie Walsh was the stage manager.

“Other Desert Cities” continues at the Mark Taper Forum until January 6. You can get tickets from the Taper website, although Hottix (2 limited view seats for $20 each, no service charge) may be available by calling Taper Customer Service at 213.628.2772. Tickets are also available for 12/31 and 1/4 on Goldstar.

This show marks the end of our 2012 theatre year. I hope you enjoyed reading these write-ups (I hesitate to call them reviews, as I have no criticism experience) as much as I enjoy writing them. I hope they have encouraged you to go to the theatre, or at least to see it as an alternative to the silver screen. I get very few comments on the reviews, so I never know if folks really read them. So if you’ve read this, I encourage you to comment with your favorite theatrical experience of 2012. It could be anything, as long as it was something on a form of stage, and was a live (not filmed) performance. C’mon, tell me what you saw.

Upcoming Theatre and Concerts:  January starts with “Anything Goes” at the Ahmanson on January 6. January 12 is currently held for the MoTAS Shabbat, although I may book something in the evening. January 19 is currently open, as Erin returns to Berkeley the next day; supposedly, there may be an event at REP of interest that evening. January 26 is being held for the just announced production of Triassic Parq–The Musical at the Chance Theatre in Orange County. February will start with the first play of the REP season, “Putnam County Spelling Bee“.  February 9 is being held for “Backbeat” at the Ahmanson. February 16 brings “You’re a Good Man, Charlie Brown” at Cabrillo Music Theatre, and the last weekend of February is currently open. March starts with “I’ll Be Back Before Midnight” at the Colony. After a break for Fogcon (although I may do something here), theatre picks up with “Catch Me If You Can” at Broadway LA/Pantages on March 16 and “Boeing Boeing” at REP East on March 23. March may also bring “End of the Rainbow” at the Ahmanson, most likely on March 30. April will bring the Southern California Renaissance Faire (huzzah for the $15 Holidazzle sale), “Grease” at Cabrillo Music Theatre, and “To Kill a Mockingbird” at REP East. I’m also keeping my eyes open as the various theatres start making their 2013 season announcements. Lastly, what few dates we do have open may be filled by productions I see on Goldstar, LA Stage Tix, Plays411, or discussed in the various LA Stage Blogs I read (I particularly recommend Musicals in LA and LA Stage Times).

Dining Notes: Before the theatre, we hit Little Tokyo. There we hit a little place in the Japanese Village Plaza Mall that we love: Wakasaya. Not great yelp ratings, but we’ve always enjoyed them. They specialize in donburi and udon with lots of different topics. Great variety, and not too expensive.

Music: Sondheim on Sondheim (2010 Original Broadway Cast): “Is This What You Call Love?”

(together with her sister, Silda)

2 Replies to “Discord in the Desert”