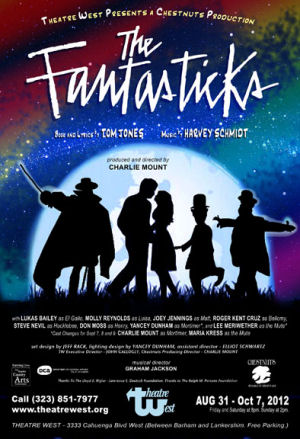 Back in 1960 (shortly after I was born), a musical premiered off-Broadway. It ran, and continued running, for 42 years. It was then revived, and is still running today. However, although the show is long-running in New York, it hasn’t gotten that many Los Angeles productions. Last night, we were able to catch the penultimate performance of this show, “The Fantasticks“, at Theatre West in Hollywood.

The Fantasticks (book and lyrics by Tom Jones, music by Harvey Schmidt) is framed by one of the most beautiful exposition songs ever:

These two verses set you up for the story, which is a timeless story of love supposedly being told by a traveling group of actors. The story concerns two families: Bellomy and his 16 year old daughter Luisa, and Hucklebee and his 20 year old son, Matt. The fathers would like their children to fall in love and marry, but children never do what their parents tell them to do. So they concoct a feud between the families, and build a wall between their houses to drive the children together. To seal the deal, they hire a gallant young actor, El Gallo, to abduct the daughter (in the original version, this was referred to in the traditional sense as “rape”, but that word is no longer P/C) and permit the son to rescue her. This he does in the light of the moon, with the help of two actors, Henry and Mortimer. By the end of Act I, the lovers are together, and the fathers are happy. A perfect picture.

But what seems perfect in the moonlight often looks different in the bright sun. Act II brings the sun. El Gallo presents his bill, and the children learn of the deception. They decide they no longer are in love, and each goes their separate ways. Matt goes out into the world, where he learns the realities. Luisa has a fantasy romance with El Gallo, where they preview a series of romantic adventures through a mask of unreality, while in the background Matt is being abused and beaten by Henry and Mortimer portraying a series of unpleasant employers. Meanwhile, the parents bemoan that children are unlike gardens: with gardens, you “plant a radish, get a radish”, but with children, you never know what you are going to get. Matt eventually returns, and falls back in love with Luisa, this time for real.

The last verse of “Try to Remember” makes the point of the story: “without a hurt, the heart is hollow”. The pure love of children is unrealistic and does not last. It is our experiences and hurts that deepen the love and affection. It is perhaps this point the clarifies why The Fantasticks is such a timeless musical.

The traditional staging ofThe Fantasticks is very simple. Actors trunks from which all props emerge. Simple stages. A mute who oversees everything and comments on the proceedings with her eyes and movements, nothing more. A piano and drum for music. It is an easy show for a theatre to stage — its success depends on the believability of the performances.

I’m pleased to say that Theatre West (FB, FB-Entity) mostly got it right. The director, Charlie Mount* (FB), assisted by Eliott Schwartz/FB, kept the focus on the simplicity of the story, and orchestrated the movement to emphasize that simplicity. He did a great job of helping the actors to develop the right expressions, which truly aided the story. As it should be, the director’s work faded into the background, so you became unaware of what was direction and what was the actor’s performance.

Serving as the narrator/El Gallo, Lukas Bailey* (FB) did a remarkable acting performance. I truly enjoyed watching his face, his movement, and his playfullness. His singing was pleasant, but not as powerful as my mind told me it should be (but then again, my mind is spoiled by the voice of the original El Gallo, Jerry Orbach).

As the fathers, Roger Kent Cruz* (FB) (Bellomy) and Steve Nevil* (FB) (Huckabee) were a perfect matched set. They had great comic moves (a number of other reviews compared the pair to Laurel and Hardy, and I think the comparison is apt, especially in terms of looks and movement). They could also sing quite well, as demonstrated in two of my favorite songs, “Never Say No” and “Plant a Radish”. They were just fun to watch.

The lovers were portrayed by Joey Jennings (Matt) and Molly Reynolds* (FB) (Luisa). Jennings had an easygoing charm that was infectuous. Reynolds was more graceful, but her playfulness came out in the number “This Plum is Too Ripe”. Both had beautiful singing voices.

Rounding out the cast were Lee Meriwether* as the Mute, Don Moss* (FB) as Henry, and Yancey Dunham (FB) at Mortimer. You would think a mute, whose primary role was to hand out props and hold up the wall, would be a minor role. But Meriwether actually made the show perfect. Her expressions, her movement, her wisdom that she conveyed were just perfect and served as a wonderful commentary. Lee Meriwether (who was once Catwoman — there, I said it) demonstrated that you don’t need words to do a superb acting job. Moss and Dunham portrayed the actors who helped the abduction, and then later waylaid Matt in the outside world. Moss did a wonderful portrayal of a Shakespearian actor in the decline of his career, and Dunham died beautifully. All were great.
[*: Member of Actors Equity]

The onstage musicians were not credited in the program (tsk, tsk), but the program does indicate that musical direction was by Graham Jackson. As is everything inThe Fantasticks, the music itself was simply presented: a piano and drummer on stage. It worked perfectly for the show.

Turning to the technical: The set design by Jeff G. Rack was appropriately simple: some trunks, some simple structures to serve as stages, and fabric. The lighting, by Yancey Dunham (FB), was very good. This was particularly notable in the “Round and Round” number with its effective use of red leikos. No credits are provided for sound design, props, costumes, or makeup. There likely was no sound design: I don’t recall any particular sound effects, and none of the actors required amplification. The props were well done and appeared magically. The costumes and makeup were appropriate. Eliott Schwartz/FB was the stage manager.

The last performance of “The Fantasticks” is today at 2pm. Ticketing information is available from the Theatre West website.

Upcoming Theatre and Concerts:  October brings some traveling for family with the bat-mitzvah of a cousin in Fresno, and Karen will be travelling for the Pacific International Quilt Festival in Santa Clara. Still, what’s a month without theatre, so… our next theatre in October is “American Fiesta” at the Colony Theatre on 10/13. This will be followed by “The Book of Mormon” at Broadway LA/The Pantages on 10/27, and “1776” at Cabrillo Music Theatre on 10/28. Continuing the look ahead: November will bring “Moonlight and Magnolias” at REP East, which is booked for the end of the month. It may also bring “Seminar” at The Ahmanson Theatre (still undecided on ticketing; another possibility is “Ruddigore” at the Sierra Madre Playhouse) and may bring a concert performance of Raul Esparza at VPAC, especially if Erin flies in for it (he’s singing on her birthday). Non-theatrically, it will also bring “Day Out with Thomas” at OERM (certainly on some or all of Veterans Day weekend – November 10-11). Lastly, to close out the year, December has nothing formally scheduled (other than ACSAC), but will likely bring “Anything Goes” at the Ahmanson, and may bring “Judy Collins” at VPAC. Starting the look into 2013. Currently nothing is scheduled for January, but that’s sure to change as REP announces its dates for the 2013 season. February brings “You’re a Good Man, Charlie Brown” at Cabrillo Music Theatre and “I’ll Be Back Before Midnight” at the Colony. It may also bring “Backbeat” at the Ahmanson. March will likely bring “Catch Me If You Can” at Broadway LA/Pantages. I’m also keeping my eyes open as the various theatres start making their 2013 season announcements. Lastly, what few dates we do have open may be filled by productions I see on Goldstar, LA Stage Tix, Plays411, or discussed in the various LA Stage Blogs I read (I particularly recommend Musicals in LA and LA Stage Times).