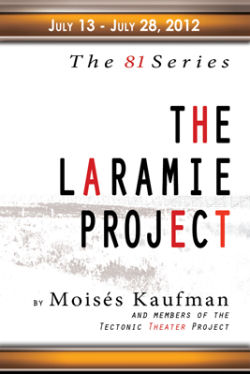 In 1998, University of Wyoming student Matthew Shepard was brutally murdered. Why did this happen? The general concensus today is that it was a hate crime: it occurred primarily because Matthew was gay, and his attackers hated gays. The attack galvanized attention on hate crimes against gays, and resulted in slow but steady progress to deter such crimes. It also caught the attention of noted playwright  Moisés Kaufman and the members of the Tectonic Theater Project, who went to the town to explore the incident. This resulted in the play “The Laramie Project“, which we saw last night at REP East Playhouse.

Going in, all I really knew was that Laramie Project was about the Matthew Shepard murder. This might make you think that it was a straightforward reenactment of the incident that night and its aftermath. It isn’t. In many ways, Laramie Project is a documentary on stage; a reenactment not of the murder, but of the creation of the play.

The Laramie Project is the result of a series of interviews that Kaufman and the Tectonic Theatre members made over the course of several visits to Laramie over the period of a year, combined with research the project did into the transcripts of the events: statements made at the hospital, police reports, trial transcripts, and other statements. This is exactly how the play is presented: it begins with the company explaining the project and starting the first interview with one of the investigators of the murder. Throughout the course of the play, you see the interviews with townspeople, from other students at the University, his advisors, the investigating officers, clergy in the town, other townspeople, people at the bar where he was last seen, etc. You also see the reactions of the members of the theatre project to what they were hearing. Through this series of interviews, you learn not only about the specifics of the murder itself (which is never reenacted), but the circumstances and attitudes that led up to the murder, as well as the town’s reaction to the murder, and how the murder changed the town forever.

The project leaves you questioning that reaction. For the most part, you see how the murder increased the tolerance in the town (although, as the director, Christopher Chase, notes in the program, “… We are taught to strive for ‘tolerance’, but this play urges you to instead seek ‘acceptance’. The negativity inherent in ‘tolerance’ (‘I can hate you as long as I don’t act on it’) can be as disgusting as violence itself.”). Did the murder result in increased acceptance? That’s a harder question to answer. Certainly, for a number of town people it did; but as the play itself notes, Wyoming never passed hate crime legislation. It didn’t result in Wyoming, the stated “equality state”, moving to the forefront of Gay Rights. In fact, the Wikipedia page on Shepard notes that it wasn’t until 2009, under President Barack Obama, fully 10 years after the crime itself, that actual hate crime legislation was passed in Congress itself.

In many ways, the play reminds us that we have far to go to get ‘acceptance’. The play reports how Fred Phelps protested the trial with anti-gay rhetoric, and how Romaine Patterson, a lesbian student at UW organized counter protests with a crew of “angels” to hide the hate. Unfortunately, Phelps is remains visible and active today, and hatred and intolerance of gays occurs far too often still (if you don’t believe me, read the comments on any article related to gay marriage or gays in the military). Still we’ve seen acceptance grow slowly, as witnessed by the slow but steady acceptance of gay marriage and positive portrayals of gays.

A good example of this was seen in the audience itself. While attending the play, I met a member of a Lutheran Church in Santa Clarita who was there because she had heard there might be protests against the play (Santa Clarita is much more conservative than Los Angeles proper). She was there to protest the protesters. There was also another church group there all wearing shirts that said “God Loves Everyone” (with the “Everyone” in rainbow colors). This is a demonstration of acceptance; this is a demonstration of the importance of plays such as this (and the importance of theatre to bring the message to the community).

Director Christopher Chase did an excellent job with this property. We’ve seen Chase before — ages ago — when he was in the excellent production of Hair at CSUN (and which was recently revived under Chase’s direction in Hollywood). The property is a difficult one, with a team of a dozen actors portraying over 60 different characters, from Kaufman and members of the theatre project to students, townspeople, officials, media, and such. Each character needs to be distinct so the story doesn’t get confused. Chase handled well drawing these distinctive voices out of the ensemble, and keeping the motion fluid so that the character changes were not distracting.

The acting ensemble was also strong. The portrayal of so many characters makes it difficult to single out particular actors — essentially, all were excellent and did a great job of creating distinct and different characters, and also because it is difficult to map the actors to characters after the fact. The ensemble consisted of Michael Bruce, Eileen Mary Butler*, Julie Henderson, Nathan T. Inzerillo, Kyle Kulish*, Vicki Lightner, Tom Lund, Doris Martin*, Tiffany Oliver, Conner Pratt, Christina Rideout*, and Paul Strickland. Characters that were particularly memorable (and thus, the actors portraying them deserve kudos) were Romaine Patterson, Rebecca Killiker, Aaron Kreifels, Doc O’Connor, Jon Peacock, Jedadiah Shultz, Zubaida Ula, Reggie Fluty, and the project members. I also need to credit the actors for their ability to become so many different characters, and create so many distinct characterizations, in such a short period of time. I saw this best demonstrated in the character of Andrew Gomez (who I think was performed by Nathan) who became latino before our eyes. Remarkable performances all.

On the technical side, the team was the tried and true excellent REP team, featuring an excellent sound design by Steven “Nanook” Burkholder (with great ambient sounds), an effective lighting design by Tim Christianson, set design by Ovington Michael Owston and Christopher Chase, stage management (as well as scenic painting and props) by Madison Orgil, with additional props and costumes by Christina Gonzalez.

“The Laramie Project” continues at REP East for two more weeks, closing on July 28. You can get tickets from the REP Online Box Office or through Goldstar. Their next production is “Playdates” by Sam Wolfson, running August 17 through September 1. REP is currently in the process of picking their next season — I’ve seen the names of some of the shows that are the leading candidates (cough, God of Carnage, cough), and it looks to be an exciting season. For those that don’t know where the REP is … it is in Newhall, CA, which is freeway close in Santa Clarita. It is one of my favorite 99-and-under seat theatres, and I have yet to see a bad production there. Do give it a try.

Upcoming Theatre and Concerts: Next weekend is my wife’s birthday weekend, and she has selected two shows: Friday night  we’re seeing “Fluffy Bunnies in a Field of Daisies” at the Arena Stage; Saturday we’re going to CSUN to see the OperaWorks production of “Non-Boring Original Opera“, which is an improvised original 3-act opera weaving well-known arias and improvised dialogue into a new storyline. (if you would like to meet us at these shows and wish her Happy Birthday, please join us).  The last weekend in July brings “Meet Me In St. Louis” at Cabrillo Music Theatre. August has a bit less, as we’re going to have some vacation days and will be taking Erin to start UC Berkeley. We’ve only got one show scheduled: “Play Dates” at REP East. As an aside: we will be vacationing in Palm Springs, so if anyone knows of live theatre going on there in August, let me know. In September theatre activity resumes, beginning with “Blame It On Beckett” at the Colony Theatre on September 1 and “Sherlock Holmes: The Final Adventure” at REP East on September 29. I”m also looking into “Silence: The Musical” at the Hayworth Theatre, which starts September 8 and runs through December, and “Xanadu” at DOMA, which starts September 7 and runs for about 3 weeks. October brings some traveling for family: the Cal Parents Weekend at UCB (tentative), and the bat-mitzvah of a cousin in Fresno. It will also bring “American Fiesta” at the Colony Theatre, “The Book of Mormon” at Broadway LA/The Pantages, and “1776” at Cabrillo Music Theatre. Continuing the look ahead: November will bring “Moonlight and Magnolias” at REP East, which is booked for the end of the month. It may also bring “Seminar” at The Ahmanson Theatre (still undecided on ticketing) and a concert performance of Raul Esparza at VPAC, especially if Erin flies in for it (he’s singing on her birthday). Non-theatrically, it will also bring “Day Out with Thomas” at OERM (certainly on some or all of Veterans Day weekend – November 10-11-12). Lastly, to close out the year, December has nothing formally scheduled (other than ACSAC), but will likely bring “Anything Goes” at the Ahmanson, and may bring “Judy Collins” at VPAC. Lastly, what few dates we do have open may be filled by productions I see on Goldstar, LA Stage Tix, Plays411, or discussed in the various LA Stage Blogs I read (I particularly recommend Musicals in LA and LA Stage Times).

One Reply to “A Community Reacts to a Murder: Exploring Tolerance vs. Acceptance”