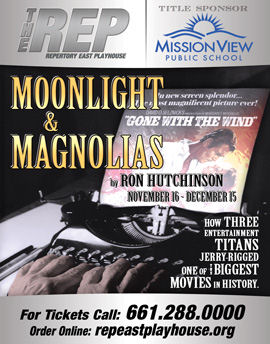 In 1936, Margaret Mitchell published her first and only novel, a sprawling 1000+ page story of an unlikeable heroine, her love for another woman’s husband, and her use and discarding of men. This heroine, in reality, cared only for herself and her survival, and took whatever means were necessary to ensure it. After selling millions of copies, Hollywood optioned the story and took three years to turn it into a movie, only to find the screenplay a horrible mess. A week into the shooting, production was shut down while the producer, one of the studio’s best screenwriters, and the new director shut themselves in a room for a week to rewrite the screenplay.

The story of that week is the story told in  Ron Hutchinson’s play “Moonlight and Magnolias“, which we saw last night at Repertory East Playhouse in Newhall, CA. We’ve seen the play before; it was done in February 2011 at The Colony Theatre. Let me summarize the plot for you:

As the story begins, it is 1939. Producer David O. Selznick has shut down production of his new epic, Gone with the Wind, because the screenplay just doesn’t work. He sends a car for famed screenwriter Ben Hecht and convinces him to spend a week rewriting the screenplay. There’s only one problem: Hecht has never read the novel. Selznick also pulls director Victor Fleming from the set of The Wizard of Oz and had him brought to his office. Fleming has read the book. Locking the two men in his office, and subsisting only on bananas and peanuts, the three men labor over five days to fashion a screenplay. This is done by Selznick and Fleming acting out the story, and Hecht writing it. Supporting them in this endeavor is Miss Poppenghul, Selznick’s secretary.

During the manic week of writing, various themes about the novel and Hollywood itself are exposed. Many believe the novel is unfilmable — to that point, there hadn’t been a successful Civil War movie, and the novel is sympathetic to the way of the South, presents Klan members in Klan outfits, has a woman shooting a Union soldier and slapping a slave. All these facts are argued about during the development of the screenplay. Also argued is Selnick’s motivation for doing the picture — acceptance in Hollywood as more than just “a Jew” or “Louis B. Mayer’s son-in-law”. This brings up the whole notion of Jews never being accepted as Americans — they were viewed as Jews first. Of course, we’ve moved beyond that today–today we would never think an American religious community would put loyalty to religion above loyalty to country.

As I’ve seen a previous production of the story, a natural comparison is how the two productions compare. Both were good, but I tended to find the REP version stronger. The week told in the story is crazy and slapstick, as one would expect from sleep deprivation.  REP played up that slapstick aspect. This was made clear from the start. Unlike the Colony’s production, the REP’s director, Brad Sergi, chose to frame the show with filmed pieces that established the context of the time and truly set the stage. The opening film piece firmly planted the story in Hollywood, introduced the players, and included some Three Stooges footage that highlighted slapstick moviemaking. Some of the same slapstick moves then occurred during the play itself. At the end of the play, another film piece used clips fromGone With The Windto show the  story as filmed… followed by a bit more Stooges. For Sergi, the heart of this story was the slapstick craziness, and he brought it out well.

One of the things that set this production apart was the excellent acting team. The leads were all REP regulars, and worked together well. As David Selznick, Nathan T. Inzerillo  captured the studio executive well, leading the story along to get it written while balancing the demands of his actors and his famous heritage. Particularly good was Barry Agin as Ben Hecht. Agin was great as the screenwriter, rumpled and passionate about the value of the writer to the story. As Victor Fleming, Michael Collins was playful and exhausting (his portrayal of Prissy is not to be missed) and just a delight to watch. Also delightful to watch was Nikki Jacobs as Miss Poppenghul. Although a small party, her interplay with Selznick was a joy to watch. The fact that, in real life, she is married to the actor portraying Selznick brought an unspoken twinkle to the interplay. This was one of those plays where you could tell the actors were just having a lot of fun with their roles.

On the technical side, the production was excellent. Jeff Hyde returned to do the set design, and it was up to Jeff’s usual impeccable standards. Research, props and set decor were provided by Marlowe and Lisa Weisman. Lighting was by Tim Christianson, and worked well. Sound design was by Steven “Nanook” Burkholder. The excellent film montages were by Brad Sergi and Rich Tamayo, supported by TVP Studios. Costumes were by Lynn McQuown. The REP’s Artistic Directors, Ovington Michael Owston and Mikee Schwinn served not only as the producers but as the stage managers as well (as the regular REP stage manager was off on her honeymoon).

“Moonlight and Magnolias” continues at REP East Playhouse through December 16, 2012. Tickets are available through the REP East Online Box Office or by calling (661) 288-0000. Tickets may also be available through Goldstar. If you friend REP East on Facebook, you can also learn of special deals on the show.

REP has also announced their 2013 season, which features one fewer show than 2012, but longer runs for the shows that are being done. Specific dates haven’t been announced, but the shows are: “The 25th Annual Putnam County Spelling Bee”, “Boeing Boeing“, “To Kill a Mockingbird“, “God of Carnage“, “9 to 5: The Musical“, and “Woody Allen’s Play It Again Sam“. Subscription forms should be available shortly; subscription prices start at $110.00.

Upcoming Theatre and Concerts:  The beginning of December is lost to ACSAC in Orlando. You are coming to the conference, aren’t you? In terms of theatre, mid-December sees us at the Colony for “The Morini Strand” on 12/15 . I’m also hoping to book “Anything Goes” at the Ahmanson for December 22, and may book Other Desert Cities at the Taper on December 29. December will also bring another concert: “Judy Collins” at VPAC on December 21. As for 2013, nothing is currently scheduled for January. Late January or early February should bring the first play of the REP season, “Putnam County Spelling Bee“.  I’m also looking into the just announced production of Triassic Parq–The Musical at the Chance Theatre in Orange County.  It is there just after my birthday, so it sounds like a great 53rd party. February brings “You’re a Good Man, Charlie Brown” at Cabrillo Music Theatre and “I’ll Be Back Before Midnight” at the Colony. It may also bring “Backbeat” at the Ahmanson. March will likely bring “Catch Me If You Can” at Broadway LA/Pantages (single tickets go on sale today). I’m also keeping my eyes open as the various theatres start making their 2013 season announcements. Lastly, what few dates we do have open may be filled by productions I see on Goldstar, LA Stage Tix, Plays411, or discussed in the various LA Stage Blogs I read (I particularly recommend Musicals in LA and LA Stage Times).

One Reply to “Sausagemaking, Using Only Bananas and Peanuts”