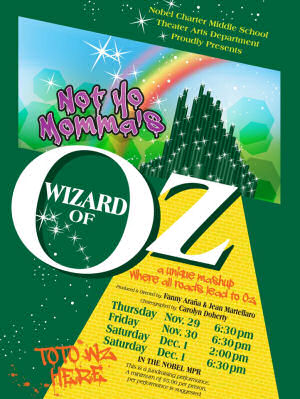 Back in 2007, we attended the second production of the nascent revitalized “Wizard of Oz… and Then Some” at Nobel Middle School. It was, as one would expect, a work in progress. The program was still finding its legs — the kid’s enthusiasm was there, but the technical side was still growing and stretching. Today, we squeezed in an afternoon performance of a slightly retooled version, “Not Yo Momma’s Wizard of Oz” (yes, they’ve gotten to the point they can recycle productions). It wasn’t an ideal squeeze — I’m busy getting ready for the conference and had a headache strike during the show — but we were able to support the program.

As I wrote last time, the play is an amalgam of the Harold Arlen “The Wizard of Oz”, with a few songs from Charlie Small’s “The Wiz” and Stephen Schwartz’ “Wicked” thrown in… and a few more surprises. I’m sure everyone is familiar with the basic story, so I won’t repeat it here. Seeing it the second time, I’m not 100% sure the mashup works — for example, the song “Popular” seems spliced in, whereas “For Good” fits well. The material from “The Wiz” fits in much better, and as for some of the other splices, well, they work great in a Middle School environment of playfulness and building the size of the cast, whereas they might not work in a more adult environment. Most of the additional changes they made for this year’s production worked; the one thing I didn’t like was how they played the character of Uncle Henry as a little bit flaming. But this is a production designed for Middle School, so they get a pass.

In terms of performance, they did great considering the cast was a collection of Middle School students, many without professional training. The enthusiasm was strongly there, even if the caliber was ever so slightly off. As was the last time, I’m not going to list the very large cast completely. I do want to highlight a few particularly good performances. In terms of singing performance, I was very impressed with their Dorothy, Abigail Franks, their Scarecrow, Jeremiah Coleman, and their Tin Man, Andrew Lewis. I was also impressed with their Talulah, Gianna Lowe. In terms of acting, I liked their lead narrator, Cassandra Cohen, their Toto, Nathan Torres, their Cowardly Lion, Miaya May, and what I’m guessing was their playful wicked witch in training, Sara (Maya Efrat). Also worthy of note were their wizards, in particular the wonderful rap performance of their Lil Wiz, Bennett Chester, and the assistant principal (I’m guessing Mark Simmons) who was playing the Wizard of Oz.

Technically, this production was head and shoulders above the original production. The sets, designed by Dennis Kull, were spectacular. Sound (Bob McNabb was the sound consultant) was also much better than the original production, although there were times where you still could not hear people. Still, that was so much fewer and far between than the original production. Lighting, with a design by Richard Doherty and consultation by Artur Cybulski, had its problems. Evidently, the lighting board rebooted during the Friday night performance, and didn’t come back until just seconds before the afternoon performance. Still, they got it working and the lights were very effective. The choreography by Carolyn Doherty was very good, and the costumes worked well for the production. Michelle Franks was the program and poster designer, and I must make the same comment I’ve been making for year about the productions at Nobel — Please put the street address of the school on the poster! The production was produced and directed by Fanny Araña and Jean Martellaro.

The last performance of “Not Yo Mamma’s Wizard of Oz” is occurring as I type this.

Upcoming Theatre and Concerts:  Next week is lost to ACSAC in Orlando. You are coming to the conference, aren’t you? In terms of theatre, mid-December sees us at the Colony for “The Morini Strand” on 12/15 . That will be followed by “Judy Collins” at VPAC on December 21, and another intriguing mash-up: “A Mulholland Christmas Carol”  at Theatre of Note on December 22 (this is a combination of A Christmas Carol with the story of the St. Francis Dam disaster). December ends with Other Desert Cities at the Taper on December 29. Whereas last week January looked empty, that’s rapidly changing. I’m planning to book “Anything Goes” at the Ahmanson for January 6. January 12 is the MoTAS Shabbat. January 19 will possibly bring “Backbeat” at the Ahmanson.  January 26 is being held for the just announced production of Triassic Parq–The Musical at the Chance Theatre in Orange County. February will likely start with the first play of the REP season, “Putnam County Spelling Bee“.  February also brings “You’re a Good Man, Charlie Brown” at Cabrillo Music Theatre. March features “I’ll Be Back Before Midnight” at the Colony and “Catch Me If You Can” at Broadway LA/Pantages. March may also bring “End of the Rainbow” at the Ahmanson. I’m also keeping my eyes open as the various theatres start making their 2013 season announcements. Lastly, what few dates we do have open may be filled by productions I see on Goldstar, LA Stage Tix, Plays411, or discussed in the various LA Stage Blogs I read (I particularly recommend Musicals in LA and LA Stage Times).