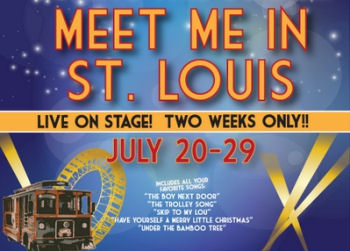 Nostalgia. Tom Paxton says that it is OK to look back, as long as you don’t stare. When times are hard, we look back towards simpler times. Calmer time periods, that are held with high-regard for their slower pace and simpler problems. One time period that is a popular nostalgia point is the beginning of the 20th century. For example, Disney revisited it in Main Street at Disneyland; Meredith Willson visited it in “The Music Man“; and MGM revisited on the screen in the classic 1944 movie, “Meet Me in St. Louis“. This movie is known not only for Judy Garland, but for introducing (or reintroducing) a number of songs that would go on to be standards: “The Boy Next Door”, “The Trolley Song”, “Have Yourself a Merry Little Christmas”, and the title song are just a few. These musicals drew on the desire for simpler times, and were very popular. In the late 1980s and 1990s, when Broadway was suffering from a dearth of home-grown product, producers turned to the MGM musicals to fill the stage, bringing us stage to screen adaptions such as “Seven Brides for Seven Brothers” and “Singing in the Rain“. They also brought to stage an adaption of “Meet Me in St. Louis“. Shows such as these were moderately successful. So when Cabrillo Music Theatre was building their season and looking for a family-friendly summer musical (as is their pattern), they choose “Meet Me In St. Louis” — a sure crowd pleaser.   I’m sure that by now you’ve figured out I’m telling you this because last night we were in Thousand Oaks, seeing the Cabrillo production of “Meet Me in St. Louis“.

“Meet Me in St. Louis” features a book by Hugh Wheeler (who died just after completing the musical adaptation) and music and lyrics primarily by Hugh Martin & Ralph Blane, although a few songs from the movie (such as the title song and a few novelty numbers) were written by others. The story is a slight one that appears old-fashioned and fluffy today: Family in 1903 St. Louis has girl daughters that want husbands, and the primary focus of the story is how the girls get their men. A secondary story involves the father’s plan to move the family from St. Louis to New York, uprooting their lives… and their budding romances. That’s it. That’s the plot. There’s a little character growth, but not much. There are moments of minor conflict. The story just isn’t one that can hold a candle to the complexity and depth of the modern musical… and perhaps it doesn’t need to. Perhaps, occasionally, it’s OK to look back and stare longingly at the simpler times, lulled into complacency by simple stories and good music.

That’s one thing that “Meet Me in St. Louis” does have — good music. Perhaps not the title song, which is a bit overdone, but other songs in the show have become standards, and it is worth seeing the show just to see the songs in context: “The Trolley Song”, “The Boy Next Door”, “Have Yourself a Merry Little Christmas”, and the novelty songs from the film. There are other songs that were added just for the musical: “You’ll Hear a Bell” (also known as “A Bell Will Ring”), “A Touch of the Irish”, “The Banjo”. All are great–but more in the tradition of standards or novelty numbers, as opposed to songs that significantly move the plot forward (in fact, I think the only two real plot songs are “The Boy Next Door” and “You’ll Hear a Bell”). Doing songs is one spot where Cabrillo shines: they know how to pick actors that can sing beautifully.

Cabrillo can’t do much about the story and the music. They are what they are — nostalgic simple syrup that tastes great, but doesn’t provide deep nourishment. But what turns simple syrup into something great is what you put around it. That’s something that Cabrillo does — and does well. For a home-grown production company (these aren’t tours), working on a tight budget, Cabrillo takes whatever property they have and turns it into something spectacular. That’s why I love their productions… and yet again Cabrillo did not disappoint.

This production of “Meet Me in St. Louis” was distinguished by their casting. Back in 2004, Cabrillo discovered a talented actor by the name of Katharine McPhee, and cast her in a wonderful production of “Annie Get Your Gun” (this was before American Idol). Cabrillo has also uncovered the talents of folks like Shannon Warne, who did a spectacular job in their “Sound of Music“. I predict Cabrillo has done so again — I was blown away by Alyssa M. Simmons (FB) in the role originated by Judy Garland, Esther Smith. This young women could sing wonderfully (you can get an idea in this older YouTube video) and brought an enthusiasm and playfulness to the stage (look at these photos for an idea) that was a delight to watch. She pretty much grabbed your attention whenever she was on the stage, it was great.

That’s not to say that she was the sole bright light. She was surrounded by a very talented cast, including Cabrillo regulars Tom Schmid* (FB) and Christina Saffran Ashford* (FB) as the parents of the family, Mr. Alonzo Smith and Mrs. Anna Smith. These two have a very nice duo in ‘Wasn’t It Fun”, and Ashford did a particularly nice job in “You’ll Hear a Bell”. As Esther’s slightly older sister, Rose, Melissa Reinertson/FB  was a little bit cooler (but I think that was the character), but did have a lovely singing voice and was spirited in her interactions with her future beau, Warren Sheffield (Dane Biren (FB)). This was best seen near the end when the proposal actually happens. Also strong was Esther’s future beau, John Truitt (Kyle Lowder* (FB)), who had a lovely singing voice. Rounding out the family were Hayley Shukiar (Tootie Smith), Antonia Vivino (Agnes Smith), Brendan Yeates (FB) (Lon Smith), John McCool Bowers (FB) (Grandpa Prophater), and Dynell Leigh/FB (Katie).  A few notes on these folks: Shukiar wins on cuteness alone (and thus steals scenes), but I was really taken with Bowers’ grandfather. Bowers had a strong sense of comic timing, and just made the portrayal look easy, natural, and fun. It’s great when that comes across to the audience. The young adults (Simmons, Reinertson, Biren, Lowder, Yeates, and others in the ensemble) were particularly strong in the dance numbers, notably “Skip to My Lou” and “The Banjo”.
(* indicates members of Actors Equity)

With respect to all the cast: They were having fun with this show, and it came across in their performances. As we attend lots of shows, I often talk to the producers and directors at intermission. I tell them time and time again that an audience can see the difference between actors going through the moves, counting the steps in their head, and actors that are just living the roles and having fun. The latter is infectuous and makes the show better through its special magic. Especially when you are dealing with actors at the regional theatre level, it is something you do not always see — but it is something that you almost always see in Cabrillo productions, and this one was no exception.

The production was directed by Linda Kerns/FB, who did a good jobs of bringing out the characters from the actors, while letting them still have fun with the roles (this was most evident when you watched the leads). The choreography by Heather Castillo (FB) was spirited and worked quite well, especially on the large dance numbers (Castillo was assisted by Timothy Stokel). Lloyd Cooper/FB was the musical director and conductor of the 16 member orchestra.

Turning to the technical for a moment. The sets and props were provided by Musical Theatre West and, for the most part, worked well. However, the trolley purest in me did not the absence of the trolley pole and overhead wire that make a trolley car a trolley car; further, the controls on their trolley car made it look more like a cable car. The St. Louis purest in me also noted that absence of any mention of Forest Park, which was actually the home of the Worlds Fair. Costumes were designed by Peggy Kellner and provided by Music Theatre of Wichita, and appeared reasonably reflective of their times. Christine Gibson was the wardrobe supervisor, and Kimberly Robinson did the hair and makeup design (although I’m not sure anyone could tame Alyssa’s ‘fro). Jonathan Burke (FB) did the sound design, and for the most part things were crisp and could be heard in the balcony (although one could not always hear what Hayley Shukiar was saying). Lighting Design was by Christina L. Munich and was reasonably effective; I particularly noted the use of the gobos to establish the scene. Technical direction was by Tim Schroepfer (FB). Production stage management was by Allie Roy* (FB), assisted by Megan Laughlin.

[ETA: You can see a video which shows you some of the production here.]

Cabrillo Music Theatre is under the artistic direction of Lewis Wilkenfeld, who gets up before every show and gives a speech about upcoming shows and what Cabrillo is doing in the community. At intermission, I went down and complemented him on this speech. I love things like this — they turn a production company into a family you care about. Wilkenfeld’s speech, plus a video that they were showing, did a great job about how this local production company not only produces great shows, but is doing great things in the community. Efforts like this, I believe, make people want to support the company. I applaud Cabrillo for doing this and for all they are doing for the Ventura County communities.

Upcoming Theatre and Concerts: We have a little less theatre in August, as we’re going to have some vacation days and will be taking Erin to start UC Berkeley. We’ve only got three shows scheduled: “Memphis” at the Pantages at the beginning of the month, followed by “I Caligula, An Insanity Musical” at Secret Rose Theatre in NoHo on August 11… with “Play Dates” at REP East at the end of the month. As an aside: we will be vacationing in Palm Springs, so if anyone knows of live theatre going on there in August, let me know. In September theatre activity resumes, beginning with “Blame It On Beckett” at the Colony Theatre on September 1 and “Sherlock Holmes: The Final Adventure” at REP East on September 29. I”m also looking into “Silence: The Musical” at the Hayworth Theatre, which starts September 8 and runs through December, and “Xanadu” at DOMA, which starts September 7 and runs for about 3 weeks. October brings some traveling for family with the bat-mitzvah of a cousin in Fresno. It will also bring “American Fiesta” at the Colony Theatre, “The Book of Mormon” at Broadway LA/The Pantages, and “1776” at Cabrillo Music Theatre. Continuing the look ahead: November will bring “Moonlight and Magnolias” at REP East, which is booked for the end of the month. It may also bring “Seminar” at The Ahmanson Theatre (still undecided on ticketing) and a concert performance of Raul Esparza at VPAC, especially if Erin flies in for it (he’s singing on her birthday). Non-theatrically, it will also bring “Day Out with Thomas” at OERM (certainly on some or all of Veterans Day weekend – November 10-11-12). Lastly, to close out the year, December has nothing formally scheduled (other than ACSAC), but will likely bring “Anything Goes” at the Ahmanson, and may bring “Judy Collins” at VPAC. Lastly, what few dates we do have open may be filled by productions I see on Goldstar, LA Stage Tix, Plays411, or discussed in the various LA Stage Blogs I read (I particularly recommend Musicals in LA and LA Stage Times).