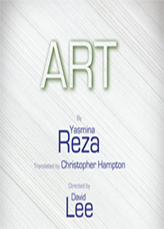 Beauty is in the eye of the beholder. That’s what they always say, isn’t it. But what if you believe the beholder is an idiot, and what he thinks is beautiful is a piece of shit? That’s the opening premise of “Art“, which we saw last night at the Pasadena Playhouse.

“Art“, by Yasmina Reza, tells the story of three friends: Serge, Marc and Yvan—who find their previously solid 15-year friendship on shaky ground when Serge buys an expensive painting. The 5’x4′ painting has a white background, upon which there are some faint white diagonal lines. Serge (a dermatologist) is proud of his 200,000€ acquisition, and fully expects the approval of his friends. However, when his friend Marc, an engineer, sees the painting, he  scornfully describes it as “a piece of white shit”. This sets of an exploration of not only what is art, but what is friendship, for it isn’t clear whether it the painting that offends him, or the uncharacteristic independence-of-thought that the purchase reveals in Serge? Added to this mix is the insecure Yvan. Yvan has just left his job in the textile trade to become a stationary salesman, plus he is about to be married. His friendship with Marc and Serge is safe, and he always attempts to make peace. This, of course, backfires. Eager to please he laughs about the painting with Marc but tells Serge he likes it. Pulled into the disagreement, his vacillations fuel the blazing row. Lines are drawn and the three square off over the canvas, using it as an excuse to relentlessly batter one another over various failures. As their arguments become less theoretical and more personal, they border on destroying their friendship. As this happens, the story becomes more and more hilarious… but I don’t want to spoil the ending.

The Pasadena Playhouse production of “Art” is one that makes me treasure not only the director, David Lee, but especially the actors who make this production something special. Translation: In this production, I could really see the talent of the actors, and what they bring to the production. No more was this seen better than the character of Yvan, played by Roger Bart. Bart portrays Yvan as a pure maniac, crazy in both action and deed, and hilarious everytime you see him because you have no idea what he is going to do. Equally crazy is Bradley Whitford as Marc. Whitford has equally great moves and reactions, and watching him play off of Bart is just hilarious. Lastly, as Serge (the fellow who bought the painting), Michael O’Keefe. Initially the stiffest of the three characters, his personality grows throughout the piece. The three together make a great ensemble that makes this piece a joy.
[All actors are members of

Turning to the technical: The set (designed by Tom Buderwitz) was simple: a modernistic apartment, with a greyish background. This allowed the focus to be on the acting. Similarly, the lighting by Jared A. Sayeg and the sound by Philip G. Allen were unobtrusive and seemed to be part of real world. This is good. Technical direction was by Brad Enlow. Jill Gold was Production Stage Manager, and Hethyr (Red) Verhoef was Asst. Stage Manager. Joe Witt was the Production Manager.

“Art” officially opens at the Pasadena Playhouse today, January 29, and runs through February 19. Tickets are available through the Pasadena Playhouse, as well as on Goldstar and through other discount outlets. The two productions at the Playhouse are “The Hieress” (April 24-May 20, 2012) and “Sleepless in Seattle-The Musical“. The latter doesn’t interest me, but the former does, after I listened to it on LA Theatreworks.

Upcoming Theatre, Concerts, and Dance: February theatre starts at Van Nuys High School, with the Senior and Alumni Dance performances on February 2-3. “God of Carnage” at ICT Long Beach follows on February 5. The next weekend sees us in Thousand Oaks for “Ring of Fire” at Cabrillo Music Theatre on February 11. The third weekend takes us to Saugus for “Jewtopia” at REP East. February concludes with “Old Wicked Songs” at the Colony Theatre. March is equally busy, beginning with “How to Succeed in Business without Really Trying” at Van Nuys High School (March 2-3 and 8-10; we’re likely going on 3/2), and Bernadette Peters in concert at the Valley Performing Arts Center on March 3. March should also bring “American Idiot” at the Ahmanson, and “Journey’s End” at REP East. It may also bring Albert Herring at the LA Opera, if we can find discount tickets. March will conclude with Tom Paxton in concert at McCabes on 3/31. Continuing the look ahead, April will bring “Billy Elliot” at the Pantages, the Southern California Renaissance Faire, “Once Upon a Mattress” at Cabrillo, and “Dames at Sea” at the Colony. As always, open dates are subject to be filled in with productions that have yet to appear on the RADAR of Goldstar or LA Stage Alliance.

3 Replies to “What Makes Something Good Art?”