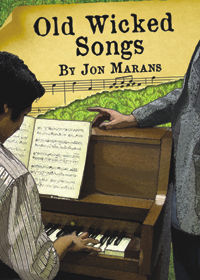 Last night, we went to see “Old Wicked Songs” at the Colony Theatre in Burbank. With a title like that, you would probably expect a musical. Although there was music, and the actors even sung to it, this was most assuredly not a musical. Rather, it was part comedy and part drama that explored the conflicted emotions and environment in Vienna, Austria, during the time that Kurt Waldheim ran for the President of Austria.

“Old Wicked Songs“, written by Jon Marans, tells the story of two men: Professor Josef Mashkan and Stephen Hoffman. Mashkan is vocal instructor in Vienna who teaches piano students how singers sing, in order that they might be better accompanists. Hoffman is a young piano prodigy who burned out doing solo concerts, who wants to move beyond technical proficiency to find the joy in music. Hoffman has come to Vienna to study with a piano teacher, but this teacher requires him to study vocal accompaniment for 3 months before he will work with him. The framing music for this study are a number of pieces by Shubert that emphasize the theme of sadness mixed with joy, which proves to be an ongoing theme throughout the piece. I don’t want to give away all the plot twists and turns, but I will mention that the story is more than just piano lessons: it goes into the deeper relationship between these two men, the relationship that both Germany and Austria have with their past (including Dachau), and the election of Kurt Waldheim, who tended to hide his personal connection to the Nazis.

When this show started, we didn’t quite know what to make of it. It was slow, with lots of classical music and German songs. Mashkan came off as slightly antisemitic, and it just didn’t seem all that interesting. We might have left midway through, but the theatre was small enough that the actors would have noticed, and that’s just a wrong thing to do. The second act turned the story around and redeemed the production — you really began to care about these two and their situation, and you ended up walking out quite satisfied. It’s nice when theatre does that.

The credit for this goes not just to the writing, but to the acting and direction. Stephanie Vlahos directs her two actors to have them come across as real people. They way they move and talk and interact just seems normal. Credit also goes to the actors: John Towey as Josef Mashkan and Tavis Danz as Stephen Hoffman. Both are excellent actors and piano artists, and come across extremely realistic.  I was particuarly taken with Towey’s portrayal of Mashkan: there was just an indescribable level of depth in it.

Turning to the technical: The Scenic Design was by Stephen Gifford, and did a great job of turning the stage into an old Vienna study. Properties and Set Dressing were by Colony regulars MacAndMe.  Lighting was by Jared A. Sayeg, and was particularly notable as some scenes were entirely done through a combination of lighting and the set — no acting. Sound design was by Drew Dalzell, and was effective, especially the music between scenes. Costume design was by Kate Bergh. Mary K Klinger was production stage manager.

Upcoming Theatre, Concerts, and Dance: March begins with Bernadette Peters in concert at the Valley Performing Arts Center on March 3. That will be followed by  “How to Succeed in Business without Really Trying” at Van Nuys High School (March 2-3 and 8-10; we’re likely going on 3/10), and continues with “American Idiot” at the Ahmanson, and “Journey’s End” at REP East. March will conclude with Tom Paxton in concert at McCabes on 3/31. Continuing the look ahead, April will bring “Billy Elliot” at the Pantages, the Southern California Renaissance Faire, “Once Upon a Mattress” at Cabrillo, and “Dames at Sea” at the Colony.  May will bring “The Great American Trailer Park Musical” at REP East, the senior dance show at Van Nuys HS, and may bring “Heiress” at the Pasadena Playhouse, “Follies” at the Ahmanson, and the Spring Railfestival at Orange Empire Railway Museum. As always, open dates are subject to be filled in with productions that have yet to appear on the RADAR of Goldstar or LA Stage Alliance.

One Reply to “Joy and Sadness in Vienna”