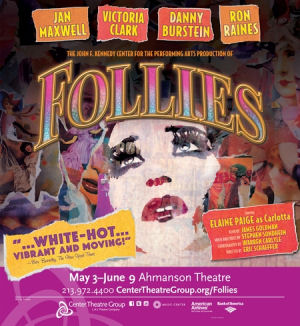 Today, in the LA Times, there is a story about the first semi-nude Vegas showgirl. She’s still got the showgirl in her; it shapes her life. She was once asked to carry Cary Grant’s child. Looking back about whether she should have done it, her response was “You wouldn’t have to care about money today, that’s for sure. But then I wouldn’t be who I am today. I’d be somebody else.”

That story dovetails well with the show we saw last night: “Follies“, which is playing through June 9 at the Ahmanson. “Follies”, with music and lyrics by Stephen Sondheim and book by James Goldman, tells the stories of a collection of old showgirls — the former Weismann Girls of the period between WWI and WWII — who have been gathered together for one last time. It is a story of a life in the theatre, and love for the theatre. Even more so, it is a story of regrets and choices not made, of relationship durability and relationship loss.

One thing Follies is not, however, is a story for young people. This is not due to any specific problematic content, but simply because they won’t understand the story. They’ll love the beautiful music and the spectacle. But they won’t understand the ghosts that haunt older people — especially the people in this show. As you get older, you acquire this ghost that is the younger you. This show makes those ghosts visible. We see the ghost showgirls inside these older women. We see the young women and men inside the characters, with their youthful exuberance and regrets. This would go over the heads of most 20-year-olds, and was probably one reason the show was not a successs when it first premiered in 1971.

So what is the story of Follies? Here’s a cut-down summary, drawn from Wikipedia: The show takes place on the soon-to-be demolished stage of the Weismann Theatre, where a reunion is being held to honor Weismann’s “Follies” shows past. This theatre is constantly populated with the ghosts of the beautiful chorus girls who once performed there. As the reunion starts, we begin to meet the Follies girls that came for the reunion, beginning with Sally Durant Plummer, now 49. Next we meet Phyllis Rogers Stone, a stylish and elegant woman, who arrives with her handsome and successful husband, Ben Stone. As more guests arrive, Sally’s husband, Buddy, enters. These are the major couples at the center of the piece: Sally married to Buddy, but in love with Ben; Buddy in love with Sally-of-the-past, not the Sally of today; Phyllis distance from Ben; and Ben walking through the motions. As the reunion continues, Mr. Weismann enters to greet his guests. We meet the other showgirls, and get to know more about them through various numbers. Former Weismann performers at the reunion include Max and Stella Deems, who lost their radio jobs and became store owners in Miami; Solange La Fitte, a coquette, who is still vibrant three decades later; Hattie Walker, who has outlived five younger husbands; Vincent and Vanessa, former dancers who now own an Arthur Murray franchise; Heidi Schiller, for whom Franz Lehár once wrote a waltz; and Carlotta Campion, a film star who has embraced life and benefited from every experience. As the guests reminisce, the stories of Ben, Phyllis, Buddy and Sally unfold. Phyllis and Sally were roommates while in the Follies, and Ben and Buddy were best friends at school in New York. As the stories are told, the ghosts in the background come alive and echo the stories being told. Sally is awed by Ben’s apparently glamorous life, but Ben wonders if he made the right choices and considers how things might have been. Sally tells Ben how her days have been spent with Buddy; it is clear that Sally is still in love with Ben – even though she was terribly hurt when Ben chose to marry Phyllis. As the reunion continues, we see the truth come out and the lives unravel. This culminates in the second act in the Loveland sequence, where each of these four characters goes through a nervous breakdown and we see their inner thoughts. By the end of the story, we’re back at the reunion, and watching which relationships survive, and which don’t.

The production of “Follies” at the Ahmanson was spectacular. It starts the moment you walk in the theatre, where the normally grand auditorium is transformed into an aging theatre about to be torn down. The production is the first I’ve seen that effectively creates ghosts and tells a story with flashbacks. This works — but it is such a novel approach I can see why it didn’t work in the 1970s. And the performances, oh the performance, they are wonderful. Credit for this not only goes to the actors, but to Eric Schaeffer who directed this story is a moving and haunting way.

But the actors, oh the actors. Let’s start with the leads: Victoria Clark as Sally Durant Plummer, Jan Maxwell as Phyllis Rogers Stone, Danny Burstein as Buddy Plummer, and Ron Raines as Benjamin Stone. These four were all wonderful, making you believe the characters were who they were. Each had their standout moments: Burstein in “The God-Why-Don’t-You-Love-Me-Blues”; Raines in a numbers such as “The Road You Didn’t Take”; Maxwell in “The Story of Lucy and Jessie” (a really dancing tour-de-force), and Clark in “Losing My Mind”. If I have any quibble it is with the casting of Clark: wonderful performance, but her voice is a bit operatic for the role (and, for the record, I also had a problem with Bernadette Peters in this role: she’s just not the right actress for this character). I’m not sure who is right: my wife suggested Annie Potts, but I’m not sure.

Next we come to the other former showgirls. These we see mostly through their spot performances. As Hattie, Jayne Houdyshell does a spot-on “Broadway Baby”, where you can see the inner performer in the doudy exterior. As Carlotta, Elaine Paige brings down the house with “I’m Still Here”. As Solange, Mary Beth Peil does a spectacular “Ah, Paris”, and the entire crew does a spectacular “Whose That Woman”, led by the wonderful Terri White (who has been through a lot). Rounding out the showgirls, we have Florence Lacey as Sandra Crane, Colleen Fitzpatrick as Dee Dee, Carol Neblett as Heidi,  and Susan Watson as Emily Whitman (who does a wonderful number, “Rain on the Roof” with her husband, Theodore, portrayed by Sammy Williams).

Throughout all these numbers, we constantly see the younger versions of these characters. Chief among the younger versions are Christian Delcroix as Young Buddy, Nick Verina as Young Ben, Lora Lee Gayer as Young Sally, and Kirsten Scott as Young Phyllis. These four just shine in numbers such as “Waiting for the Girls Upstairs”  and in the Loveland sequences. Rounding out the “young” versions were Leah Horowitz (Young Heidi), Becky Elizabeth Stout (Young Sandra, Buddy’s Blues “Margie”), Angel Reda (Young Solange), Jenifer Foote (Young Hattie, Buddy’s Blues “Sally”), Erin N. Moore (Young Stella), Danielle Jordan (Young Emily), and Pamela Otterson (Young Carlotta). All of these performers were also part of the ensemble, and were principally seen as ghosts and dancers echoing the older versions of their characters.

Turning to the music and dance aspects. I’ve already mentioned that the music was composed by Stephen Sondheim. Orchestrations were by Jonathan Tunick. Music direction was by James Moore, and the production featured a nice large and lush orchestra. The choreography was by Warren Carlyle and was beautiful. I particularly noted the ghostly spectral showgirls constantly moving in the back, and how the younger versions of the dancers mirrors the older performers. Dance music was arranged by John Berkman.

The technical production was also outstanding. From the moment you enter the theatre you were aware of Derek McLane‘s wonderful scenic design. He transformed the Ahmanson stage into a decaying theatre, but even more amazing was the sudden Loveland transmission. Speaking of Loveland, that sequence highlighted the lighting design of Natasha Katz, where you could easily see how color created a mood. The costumes of Gregg Barnes did a wonderful job of creating not only the fabulous showgirl costumes, but the informal actor clothing of the thirties, as well as establishing the older showgirl characters and their present lives. Hair and wig design was by David Brian Brown, with make up by Joseph Dulude II. The sound design by Kai Harada was hidden, as a good sound design should be–everything was clear and crisp and the sound effects were natural. Juniper Street Productions served as the production manager, and Mark Rozzano is the company manager. David Ruttura was associate director. Ray Jin was the production stage manager.

“Follies” continues at the Ahamanson until June 9. You can get tickets through the Ahmanson Website, although if you’re looking for the cheap tickets, here’s a hint. If there are lots of balcony tickets available, just go to the box office and ask for Hottix. You can get two balcony tickets, day of show, at the box office, for $20 each, no surcharge. That’s what we did.

Upcoming Theatre, Concerts, and Dance: Rounding out June we have “Addams Family” at the Pantages on June 15 and “Million Dollar Quartet” at the Pantages on June 22, as well as the Palisades High School mega-picnic and the Wilshire Blvd Temple Camps 60th Anniversary. July features “The Savannah Disputation” at the Colony, “The Laramie Project” at REP East, and “Meet Me In St. Louis” at Cabrillo. August is more open, but will bring “Memphis” at the Pantages and “Playdates” at REP East.  As always, open dates are subject to be filled in with productions that have yet to appear on the RADAR of Goldstar or LA Stage Alliance.