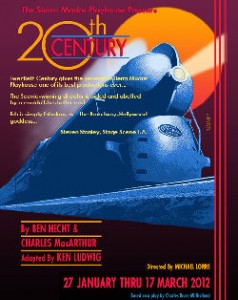 A number of weeks ago, I read an article in the LA Stage Blog about the challenges of staging “20th Century” on a black-box stage with no wings or fly space. The author indicated the challenge resulted in an even funnier production. Thinking this was the Cy Coleman / Comden and Green musical “On the Twentieth Century“, I quickly got tickets. Today, we trudged out to the Sierra Madre Playhouse to see the show… and I was surprised in a number of ways.

First, the show wasn’t what I expected. Instead of the musical, the show was the original play by Ben Hecht and Charles MacArthur, adapted by Ken Ludwig. Secondly, the production was quite funny and quite well acted. So my initial disappointment turned into pleasure, and now I understand the musical much better. The play itself is quite significant: produced in 1932, it was later remade as a 1934 movie with John Barrymore and Carole Lombard that ushered in the era of 1930s screwball comedies.

The story of “20th Century” is set in March 1933 on the Twentieth Century Limited, a train from Chicago to New York City. The story is centered around Oscar Jaffe, an egomaniacal Broadway director, and Lily Garland, the chorus girl he transformed into a leading lady. With three failed productions in a row, bankrupt, and about to lose his theatre after the failure of his latest, “Joan of Arc”, Oscar boards the Twentieth Century Limited. He knows that his former protege and star, Lily Garland, will also be on the train; Lily is now a temperamental movie star (with a “golden statue”). He’ll do anything to get her back under contract and back in his bed, but his former protege will have nothing to do with him.  Assisting Jaffe in this exercise are his staff, Ida Webb and Owne O’Malley. Also on the train are Dr. Grover Lockwood and his mistress, Anita Highland; the doctor has written a play he wants Jaffe to product (about “Joan of Arc”). Also on the train is Myrtle Clark, a religious fanatic and heiress of a laxative fortune (and also escaped from an asylum). After Lily Garland boards the train at the second stop with her agent and boytoy, George Smith, the craziness begins. Now add to this mixture a second producer who also wants to cast Garland in his production, and the touring company of the  Oberammergau Passion Play. The role of the century! A potential investor! All of this to be resolved on a single train trip from Chicago to New York.

As you can see, this is definitely a screwball comedy that requires a good cast, together with a set that works for multiple staterooms and a train. Somehow, Sierra Madre Playhouse pulled this all together into a production that works. Credit here goes to the director, Michael Lorre, and his excellent cast, led by Arthur Hanketæ as Oscar Jaffe, with Hanket’s real-life wife, Stephenie Hanket Erbæ as Lily Garland. Hanket (as Jaffe) has the megamaniacal part down well, and overplays the role as necessary perfectly. The real-life chemistry between the two comes across on stage as you see Oscar and Lily sparring and playing with each other like a cat and a mouse. These two work well together, and are fun to watch.

This doesn’t mean the rest of the cast is slouching. Notable in the second tier is Beth Leckbee as Myrtle Clark. Leckbee is a joy to watch whenever she is on stage, with a playful energy that is delightful. Also notable are the various “assistants”: Alan Brooksæ as Owen O’Malley, Kimberly Lewisæ as Ida Webb, and Matt Isemanæ as George Smith. These three provided the necessary straightness to the craziness provided by Oscar Jaffe, Lily Garland, and Myrtle Clark. They were all fun to watch–I was particularly surprised by Iseman, who I knew only has the carpenter on Clean House. Completing the main cast were Douglas Gabrielleæ as the Conductor, Barry Saltzmanæ as Dr. Grover Lockwood, and Dorothy Brooksæ as Anita Highland. Of these, Gabrielle had the right look and feel for the conductor, and I particularly liked his actions and reactions in the gunshot scenes. Rounding out the cast were Matt Bolte as the Porter/Passion Play Lead, Grant Baciocco as the nurse and Max Jacobs, Jill Maglione in the smaller unnamed female roles, and Zoe Hanket (the lead’s daughter) as the little girl boarding the train. Two comments on this last tier: I particularly liked Baciocco’s Max Jacobs, and I liked the acting but not the makeup for Bolte as the Passion Play Christos.
[æ denotes members of

Actors Equity or other 4-A Unions]

Turning to the technical side of things: The set design by Adam Smith was masterful: two compartments and a general seating area, with a boarding space to the right of the stage, on an elevated platform that permitted boarding. This provided the three main settings for the actions quite well. The set was augmented by the excellent lighting design of Sammy Ross (PRG) and sound of Michael Lorre. Costumes (by Shon LeBlank of The Costume House) were appropriately period–I particularly liked the correctness of the men’s suits. Wigs were by Kevin Remington, with probs by Anne Marie Atwan. Kim Kurzinger was stage manager, and Orlando Mendoza was the house manager.

Upcoming Theatre, Concerts, and Dance: We conclude February in Burbank, with “Old Wicked Songs” at the Colony Theatre. March is equally busy, beginning with “How to Succeed in Business without Really Trying” at Van Nuys High School (March 2-3 and 8-10; we’re likely going on 3/2), and Bernadette Peters in concert at the Valley Performing Arts Center on March 3. March should also bring “American Idiot” at the Ahmanson, and “Journey’s End” at REP East. March will conclude with Tom Paxton in concert at McCabes on 3/31. Continuing the look ahead, April will bring “Billy Elliot” at the Pantages, the Southern California Renaissance Faire, “Once Upon a Mattress” at Cabrillo, and “Dames at Sea” at the Colony.  May will bring “The Great American Trailer Park Musical” at REP East, the senior dance show at Van Nuys HS, and may bring “Heiress” at the Pasadena Playhouse, “Follies” at the Ahmanson, and the Spring Railfestival at Orange Empire Railway Museum. As always, open dates are subject to be filled in with productions that have yet to appear on the RADAR of Goldstar or LA Stage Alliance.