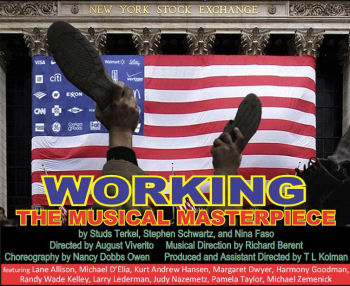 Back in the 1980s, when driving back from the San Fernando Valley to Brentwood, I was listening to KCRW when the song “Just a Waitress” came on the radio. I fell in love with the song, and eventually learned it came from the Stephen Schwartz musical “Working“. Eventually, I got a recording of the show from someone over Usenet, and fell in love with the music. I eventually saw the show sometime in the 1990s at PCPA Theatrefest in Solvang, and it holds a special niche in my musical favorites. So when I discovered that it was being done by a small theatre in Hollywood, I worked to squeeze it into the schedule. Thus, this afternoon found us at The Lex Theatre in Hollywood seeing The Production Company’s production of Stephen Schwartz’s “Working“.

For those who aren’t familiar with “Working“, it is based on one of the collections of oral histories done by Studs Terkel titled ” Working: People Talk About What They Do All Day and How They Feel About What They Do“. In this book, Studs talked to lots of people and asked them about their jobs. Stephen Schwartz and Nina Faso then took a number of these stories and wove them together into a musical quilt of people talking about their jobs, integrating music by Schwartz, Craig Carnelia, Micki Grant, Mary Rodgers, and James Taylor, and lyrics by Schwartz, Carnelia, Grant, Taylor, and Susan Birkenhead. As you can see, this is a stellar collection of composers and lyricists, and “Working” has some of the best music around. There isn’t a through plot, although there is a message: people work for various reasons: for the money, for their family, and sometimes, just because they are proud of what they and want to leave some form of mark on the world. Since the original production, a few songs have become dated and were replaced: in particular, “Newsboy” was dropped, and “I’m Just Moving” was added.

This is also an ensemble show: often actors play multiple characters, depending on the song. This is especially true in a small theatre. The ensemble that The Production Company assembled was very strong — I only had a few quibbles. Going in alphabetical order… Lane Allison (Pam (Babe), Enid) not only come first alphabetically, but was my favorite of all the female actors in the cast. She was particuarly strong in the number “I’m Just Moving”. Not only did Lane have a strong singing voice, but her face was extremely expressive and she just seemed to radiate joy in the characters she protrayed. Michael D’Elia (Roberto, Mason soloist, Ralph) was particularly strong in “Un Mejor Dia Vendra” and as the soloist in “Mason”: he had a wonderful singing voice and was very expressive and moving. Margaret Dwyer (Roberta, Millwork Soloist, Heather) was generally good, although she didn’t quite have the right voice for “Millwork”, at least to my taste. However, her monologue as the hooker was wonderful. Harmony Goodman* (Kate, Grace, Sharon) was notable as the lead millworker in “Millworker”, and did a very good job with one of my favorite songs, “Just a Housewife”. Kurt Andrew Hansen* (Mike) was excellent in his numerous songs: he was great as the steelworker, did a wonderful job on “Fathers and Songs”, and was just a joy to watch in the ensemble. Randy Wade Kelley (Frank, Tom Charlie) was also notable during his monologue in “Fathers and Son”. Larry Lederman* (Al, Trucker) [who we’ve seen before in “Gypsy“] was great as “Lovin’ Al” and in other numerous small roles. Judy Nazemetz* was great as the teacher in “Nobody Tells Me How”, although she needed a bit more belt and bravado to pull off “It’s an Art” (she was playing more to the humorous side). Pamela Taylor (Amanda Maggie) [who we’ve seen before in “Blood Brothers“] was wonderful in all her numbers — she was particularly strong in “Cleanin’ Women” and her expressiveness. Lastly, Michael Zemenick* (Rex, Anthony, Joe) was very strong — both in acting (as the Mason) and in singing (in numbers such as “Joe” — a number I normally don’t like, but Zemenick made very good).

As I said, a strong ensemble. The production was directed by August Viverito, assisted by T L Kolman (who also was the producer), who did an excellent job of turning the actors into characters. I particularly noticed how he had the actors in the background moving in character during numbers (such as “It’s an Art”, among others). Choreography was by Nancy Dobbs Owen, who did an excellent job of meaningful movement in the small Lex theatre space. Musical direction was by Richard Berent, who played piano on stage, assisted by George “Drew” Derieux on guitar and John Harvey on percussion.

The set design did a wonderful job of making the show current, echoing the recent “occupy” movement and the battles against unions in Wisconsin. This design, which would have made Studs Turkel proud, was by the director, August Viverito. Lighting design was by Ric Zimmerman, and made good use of both conventional and LED lighting (although the latter tended to flicker as it came on). Customes were by Kelly Graham, and worked quite well. Christopher Carver and CB Spencer were the production stage managers.

The Production Company’s “Working”  continues at the Lex Theatre until May 6. You can get tickets through Brown Paper Tickets; they may be available on Goldstar as well. It is well worth seeing.

Upcoming Theatre, Concerts, and Dance: The last weekend in April sees us out in Thousand Oaks for “Once Upon a Mattress” at Cabrillo; I may book tickets for “The Heiress” at the Pasadena Playhouse on that Sunday or perhaps the following weekend (heard it on LA Theatre Works and it sounds good). May begins with “Dames at Sea” at the Colony.  It also brings the senior dance show at Van Nuys HS, the Spring Railfest at Orange Empire, “The Great American Trailer Park Musical” at REP East, and it may also bring “Follies” at the Ahmanson. Oh, and May also has my daughter’s HS graduation. June is more open, but does feature both “Addams Family” and “Million Dollar Quartet” at the Pantages. As always, open dates are subject to be filled in with productions that have yet to appear on the RADAR of Goldstar or LA Stage Alliance.