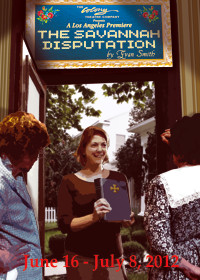 My friend, Larry (of perl fame) used to tell me how he would handle religious arguments: he would pull out a copy of the septuagint, and attempt to resolve the issue by going back to the original Greek, or even earlier. This story came to my mind as I watched the penultimate performance of “The Savannah Disputation” last night at the Colony Theatre in Burbank.

The Savannah Disputation (written by Evan Smith) tells the story of Mary and Margaret, two middle-age sisters living together in Savannah. Mary, the older sister, is an angry and bitter women, eager to argue with everyone, and having little tolerance for fools. Margaret, on the other hand, tries to see the good in people and appears to genuinely care about others. As the story opens, their household is visited by a cheerful young Pentecostal missionary, Melissa, intent on converting them away from Catholicism. Mary slams the door in her face,  foreshadowing the rest of the play by saying “I hope she comes back so I can slam the door in her face again.” She does come back, and this time Margaret answers the door. Margaret is more interested in what she has to say, taking a pamphlet, and making arrangements for her to come back the following Sunday. When Melissa (the missionary) returns, Mary is home and pissed about the return visit (well, Mary is pissed about everything, but she’s especially pissed about this). As Margaret and Melissa debates whether Catholicism is founded on a lie (specifically, whether “petra” refers to St. Peter), Mary joins in the argument and eventually kicks Melissa out again.

But the seed of doubt had been planted. To resolve these doubts, Mary engineers a confrontation. She has Margaret call Melissa and apologize, express interest in what she was saying, and invite her back Thursday at 7pm. Mary then invites her friend, Father Patrick Murphy, to dinner the next Thursday. They are just finishing dinner when guess who should arrive: Melissa. You can guess how the discussion goes from there. For most of this, Father Murphy holds back, out of fear of converting Melissa to Catholicism. But once he gets going, they go after it… arguing chapter and verse, and causing everyone to question their beliefs.

That’s the basic story. Looking at the basic story, it had its strengths and weaknesses. Dealing with the strengths firsts: the characters of the two sisters are great, and fall in the tradition of the great odd couples — in this case, we have meanness vs. sweetness. This works well, and you can see why each sister behaves the way they do. The comedy of this piece is also quiet funny, especially if you enjoy jabs at the various sillier aspects of Christianity. I also like the way the Father is not obviously a father, holding back from the argument until drawn in by a particular technical point (and a hefty dollop of good scotch).

On the weakness side, I found that the play left me wanting more (and it was not that the play was too long and they had to cut–this was a 90 minute, one-act piece). There were hints that one sister was ill; this was indicated by a regular phone message left from a doctor’s office. This was never followed-up on; it would have been nice to learn how the reaction to this illness raised questions of faith and how the two variations of Christianity addressed them. There was also mention of a breakup between Melissa (the missionary) and her pastor (and now ex-boyfriend) — it would have been interesting to see how this affected Melissa’s faith. Further, at the end of the play, various characters were left questioning aspects of their faith. It would have been nice to revisit these characters later to see how this questioning affected them. The play also only superficially touched what the real faiths were; it would have been nice to see more the differences between the liturgical Catholicism and the emotional evangelical faith. This all could have been handled in a second act that explored these questions two to three weeks later in the storyline. Lastly, although the local was titularly in Savannah, there wasn’t anything particularly Southern about the story other than the accents and the scenery.

Story aside, the production was a treat to watch. The director, Cameron Watson, did a great job of pulling the characters out of the actors: you believed these people were who they pretended to be. This was particularly true for Anne Gee Byrd*, who has worked with Watson before. Byrd’s portray of Mary was spot on: angry and bitter and manipulative (a type of senior that, alas, I know far too well). In bringing up these feelings, it was also one other thing: realistic. This is a good thing, for Mary is a character that could far too easily be turned into Sophia from the Golden Girls. On the sweet side of the scale, Bonnie Bailey-Reed*’s portray of Margaret was delightfully pleasant; someone you would enjoy being around and could simply spend time with.  Again, this was a role that could devolve into characterture, but the actor and director combined to ensure that it didn’t.

Turning to the missionaries themselves: on the evangelical side there was Rebecca Mozo* as Melissa. Mozo’s Melissa was that perky Southern blond that you just hate: over-eager, bent on her mission, full of spunk. She was well played by Mozo, who demonstrated the character’s vulnerability in the scene where she was breaking up with her boyfriend. Lastly, as Father Murphy, Josh Clark* gives a wonderfully underplayed performance: you can just watch him simmer when he learns of the subterfuge, and come closer to boiling as he listens while sipping scotch.
[* indicates members of Actors Equity]

Technically, the production reflected what we have come to expect from the Colony. There was a wonderful scenic design by Stephen Gifford that gave the sense of Savannah, with loads of appropriate properties and atmosphere items provided by MacAndME. The lighting by Jared A. Sayeg did a wonderful job of establishing the mood, and the sound design by Rebecca Kessin provided the requisite sound effects to establish the story. The costumes by Kate Bergh were appropriately period and worked well. Gil Tordjman was the production stage manager.

“The Savannah Disputation” has its last performance this afternoon at The Colony Theatre. Our performance was almost sold out; I have no idea if there are any tickets still available.

Upcoming Theatre and Concerts: Next weekend sees us up in Santa Clarita for the first production of REP East’s 81 Series (a group of more mature-themed summer plays):  “The Laramie Project”. I’ve heard good things about this play; it will be interesting to see how REP does it.  The third weekend in July is my wife’s birthday weekend, and she has selected two shows: Friday night  we’re seeing “Fluffy Bunnies in a Field of Daisies” at the Arena Stage; Saturday we’re going to CSUN to see the OperaWorks production of “Non-Boring Original Opera“, which is an improvised original 3-act opera weaving well-known arias and improvised dialogue into a new storyline. (if you would like to meet us at these shows and wish her Happy Birthday, please join us).  The last weekend in July brings “Meet Me In St. Louis” at Cabrillo Music Theatre. August has a bit less, as we’re going to have some vacation days and will be taking Erin to start UC Berkeley. We’ve only got one show scheduled: “Play Dates” at REP East. As an aside: we will be vacationing in Palm Springs, so if anyone knows of live theatre going on there in August, let me know. In September theatre activity resumes, beginning with “Blame It On Beckett” at the Colony Theatre on September 1 and “Sherlock Holmes: The Final Adventure” at REP East on September 29. I”m also looking into “Silence: The Musical” at the Hayworth Theatre, which starts September 8 and runs through December, and “Xanadu” at DOMA, which starts September 7 and runs for about 3 weeks. October brings some traveling for family: the Cal Parents Weekend at UCB, and the bat-mitzvah of a cousin in Fresno. It will also bring “American Fiesta” at the Colony Theatre, “The Book of Mormon” at Broadway LA/The Pantages, and “1776” at Cabrillo Music Theatre. Continuing the look ahead: November will bring “Moonlight and Magnolias” at REP East, which is booked for the end of the month. It may also bring “Seminar” at The Ahmanson Theatre (still undecided on ticketing) and a concert performance of Raul Esparza at VPAC, especially if Erin flies in for it (he’s singing on her birthday). Non-theatrically, it will also bring “Day Out with Thomas” at OERM (certainly on some or all of Veterans Day weekend – November 10-11-12). Lastly, to close out the year, December has nothing formally scheduled (other than ACSAC), but will likely bring “Anything Goes” at the Ahmanson, and may bring “Judy Collins” at VPAC. Lastly, what few dates we do have open may be filled by productions I see on Goldstar, LA Stage Tix, Plays411, or discussed in the various LA Stage Blogs I read (I particularly recommend Musicals in LA and LA Stage Times.

One Reply to “Missionaries at the Door”