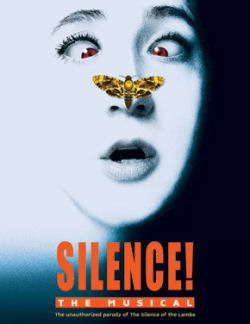 Back in college, I had a girlfriend that loved to go to horror movies. After that relationship ended, I never really went to horror movies again. Thus, I’ve never seen the movie “Silence of the Lambs“. If I had, perhaps I would have understand today’s show a bit more.

Perhaps I should start over…  When musicals are made from properties in another medium, there are two ways the project can go. The first is serious: a serious musical translation of the story to the stage, discarding what doesn’t work on the stage and adapting the production for what does. I’m sure you can think of many examples of this (my first thought was A Color Purple). The second type is the parody, where the stage production is an overly faithful translation, playing up the camp aspects of the production for humor. Again, I’ve seen many examples of this (such as A Very Brady Musical), and there are many I want to see (Toxic Avenger – The Musical). I saw one of the better ones today: “Silence! The Musical” at the Hayworth Theatre. The subtitle of the production is “The unauthorized parody of The Silence of the Lambs“, so now you should understand my opening paragraph.

Story-wise, Silence! is a very faithful presentation of the movie’s story, preserving key iconic scenes, voices, mannerisms, and such. In fact, these characteristics are often overplayed, such as Agent Starling’s accent, which turns ever “s” into an “sh”. Thish can make the dialogue difficult to undershtand shometimesh. This was done for all the characters: Lecter, Buffalo Bill, Dr. Chilton, Jack Crawford, Catherine Martin and so forth. So I shouldn’t need to give you all the details of the story: you can get that from the Wikipedia page. Oh well, if you inshisht, I’ll give you a shynopshish. Clarice Starling, an FBI Behavioral Science trainee, is pulled by Agt. Jack Crawford to try and get information from Hannibal Lecter, a convicted psychopath and cannibal. The hope is that he will help them find another psychopath called Buffalo Bill, who is capturing fat girls, killing them, and using pieces of their skin to make clothing.

But this is a parody, meaning that the authors (Hunter Bell, book; Jon Kaplan and Al Kaplan, music and lyrics) amped up the absurdity. This starts at the get-go, when the opening exposition is done by… you guessed it, a chorus of actors dressed as lambs. Everything was absurd (so absurd, at points, you can see the actors on the edge of cracking up). Some examples. When Lecter is flow to Tennessee, this is portrayed by…. Jack Crawford going around the stage with a paper airplane. When another character is dealing with the weather, the sequence is rain (squirt bottles on mist), snow (paper confetti), and … bubbles. When drawers don’t open, people hand things around the set. When they need smoke for a flashback, the lambs come out and clap erasers together. For the song “If I Could Smell Her C*nt”, there are ballet dancers on stage where the female dancer is conspicuously spreading her legs wide to the audience. You get the idea. Completely absurd… even to the level of mentioning sequels and future Jodie Foster movies. In addition to the book, credit for the absurdity goes to the director and choreographer Christopher Gattelli, who won the 2012 Tony award for the choreography of Newsies! (and yes, there were some Newsies! in-jokes as well). The choreography absurdities includes having the lambs use their hoofs to simulate tap dancing, or use of a doll around the neck to simulate young Clarice.

During this show, the audience was cracking up. Most of them, I am sure, had seen the movie and were riffing on the in-jokes. But even for someone who hadn’t seen the movie and had only a passing familiarity with the story, the absurdity was quite funny sometimes. One would think that the movie would have been low on the “Rotten Tomatoes” scale (and yes, before you ask, there is a “Showgirls! The Musical” that just got funded on Kickstarter), but this was a serious movie that won serious awards (including Best Picture). It is almost as if someone had done Ghandi, The Musical (don’t think about it… someone did). So I think all audiences (if you can get past the language and misogyny in the original story) will enjoy it somewhat. Just don’t go in expecting a serious musical translation. You’ll be seriously disappointed.

The acting in this was top notch, which isn’t a surprise given the cast. In the lead position, as Hannibal Lecter, was Davis Gaines, who played the lead in Phantom of the Opera. Yes, there were times this was parodied as well, especially when he commented about being half man and half monster. Gaines, of course, sang and acted well, but you can tell he was just having fun with the parody and the character. Opposite Gaines was Christine Lakin, who many remember from Step by Step, but who is also doing mockumentaries. Lakin is a very good comic actress (who also had fun with the humor). Perhaps not surprisingly, she was also very strong in the singing and dancing department. The two worked very well together. Rounding out the leads was Stephen Bienskie, who originated the role of Buffalo Bill/Jaime Gumb off-Broadway and has the performance down to a “T”. Overplaying as appropriate, he was at his wildest in the number “I’d F*ck Me”.

Rounding out the cast in various roles (including, when appropriate, as lambs) were Kathy Dietch (Catherine Martin, &c), Jeff Hiller (Sgt. Pembry, &c), John Kassir (Jack Crawford, &c), Latoya London (Ardelia Mapp, &c), Melissa Sandvig (Dream Clarice), Jeff Skowron (Dr. Chilton, &c), and Karl Warden (Dream Hannibal) [Alaine Kashian and Jesse Merlin (who we saw a long time ago in Beastly Bombing) were the standbys]. All of them were great and overacted, where appropriate, well.
[All actors are members of Actors Equity]

The music in the production was quite good, under the direction of Nate Patten, who conducted an amazing 3 piece ensemble (David Manning on keyboards, Alby Potts on keyboards, and Terry Schonig on percussion). They sounded like a much larger orchestra.

Turning to the technical side. The uncredited set design was relatively simple: four panels that were wheeled around to hide actors movements, a desk or two on wheels, and various props to establish locals. The set was supported by videos by Richard H. DiBella that were reasonably effective. The costumes by David Kaley were effectively and presumably truthful to the movie based on audience reaction (from the clips I’ve seen, I know that Starling (I keep wanting to type Shtarling) and Lecter’s were); these were supported by great wigs from Byron J. Batista. The sound by Carl Casella was excellent — both the actor amplification and the sound effects. The lighting by Jeff Croiter did a great job of establishing the mood and setting the scene. Ritchard Druther was Production Stage Manger, with Peter R. Feuchtwanger serving as Production Supervisor. Now, I normally don’t mention publicity, advertising, and producer credits, but there’s one additional credit worth mentioning. This is the first show where I’ve seen a specific credit for Social Media – Camron Cooke. So, for those of you astudiously studying social media, there is hope.

“Silence! The Musical” runs until October 12 at the Hayworth Theatre. Tickets are available online, through the box office, and may be available through Goldstar or Plays411.

Upcoming Theatre and Concerts: Next weekend brings “Xanadu–The Musical” at DOMA; I’ve heard the music, and again this is a great parody. The penultimate weekend in September takes us to the Celebration Theatre in Hollywood for the musical Justin Love. The month ends with  “Sherlock Holmes: The Final Adventure” at REP East on September 29. October brings some traveling for family with the bat-mitzvah of a cousin in Fresno, and Karen will be travelling for the Pacific International Quilt Festival in Santa Clara. Still, what’s a month without theatre, so… October will start out with “The Fantasticks“ at Theatre West on 10/6. That will be followed by “American Fiesta” at the Colony Theatre on 10/13, “The Book of Mormon” at Broadway LA/The Pantages on 10/27, and “1776” at Cabrillo Music Theatre on 10/28. Continuing the look ahead: November will bring “Moonlight and Magnolias” at REP East, which is booked for the end of the month. It may also bring “Seminar” at The Ahmanson Theatre (still undecided on ticketing; another possibility is “Ruddigore” at the Sierra Madre Playhouse) and may bring a concert performance of Raul Esparza at VPAC, especially if Erin flies in for it (he’s singing on her birthday). Non-theatrically, it will also bring “Day Out with Thomas” at OERM (certainly on some or all of Veterans Day weekend – November 10-11). Lastly, to close out the year, December has nothing formally scheduled (other than ACSAC), but will likely bring “Anything Goes” at the Ahmanson, and may bring “Judy Collins” at VPAC. Lastly, what few dates we do have open may be filled by productions I see on Goldstar, LA Stage Tix, Plays411, or discussed in the various LA Stage Blogs I read (I particularly recommend Musicals in LA and LA Stage Times).

4 Replies to “Dining Before The Show: Liver with some Fava beans and a nice Chianti”