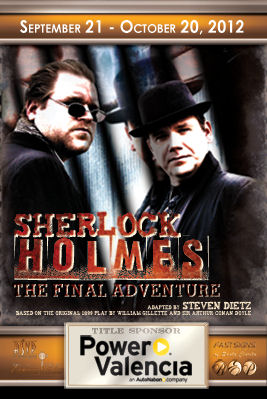 After last night’s production, I turned to my wife and said, “You know, you can just tell that those two guys are really good friends.” What’s interesting is that I was talking not only about the two lead characters in the play, but the actors playing them as well. If you hadn’t deduced it yet, I might as well reveal that I was talking not only about the two fictional best-buds, Sherlock Holmes and Dr. John Watson, but two real-life best-buds, Mikee Schwinn/FB and Ovington Michael Owston (“O”)/FB. These latter two are not only the co-artistic directors at Repertory East Playhouse in Saugus, but played the former two in REP’s excellent production of “Sherlock Holmes: The Final Adventure“.

We’ve seen Sherlock Holmes at the REP before. Back in 2009, REP did “Hound of the Baskervilles“, which stared REP regulars Michael Levine and Kyle Kulish/FB as the sleuth and his assistant. I wrote back then that Levine and Kulish “captured the nature of these well-known characters well: the precision of Holmes, the familiarity and warmth of Watson.” I didn’t observe, however, that it captured the deep underlying friendship between the two men. That is something that Mikee and “O” caught, because it exists in real life. I’ll also note that we’ve seen this story before: way back in 2006, the Pasadena Playhouse did a production of “Sherlock Holmes: The Final Adventure“ (which restored my faith in the Pasadena Playhouse, coming as it did after the disastrous production “As U Lyk It“). That production didn’t stick in my mind (although aspects of the story itself did, especially at the end); this is quite likely because the Playhouse had actors (Mark Capri as Sherlock Holmes; Victor Talmadge as Dr. John Hamish Watson)  playing friends, not friends playing out their friendship on stage. I emphasize this friendship aspect because if you know “O” and Mikee, you think of them as a pair, just as you think of Holmes/Watson as a pair. Both pairs complement each other, seemingly would go through think and thin for each other, and have a deep affection for each other. This was the dream casting, and it paid off.

“Sherlock Holmes: The Final Adventure” is based on the famous Sherlock Holmes story “A Scandal in Bohemia” intertwined with the story in “The Adventure of the Final Problem“. The play is based on the original 1899 play that adapted these stories by William Gillette and Arthur Conan Doyle. This adaptation was written by Steven Dietz, and was originally presented by the Arizona Theatre Company (whose 2006 world premiere production ran concurrently with the Pasadena Playhouse production). Sherlock Holmes is a powerful literary creation: The detective buddies have been the inspiration for numerous procedural detective stories (to me, the best example is Monk), and are currently a hot property on TV (where a new adaptation, Elementary, just premiered).

“Sherlock Holmes: The Final Adventure” opens with the announcement that Sherlock Holmes is dead. The story of that death is then related by Dr. Watson, beginning with the time that Holmes called Watson to his study to perform the necessary exposition, uh, I mean, beginning with the time that Holmes directed Watson to sneak into his study by the back door to observe being seen. Holmes was on the verge of the capture of his nemesis, Professor Moriarty, and needed to hide on the continent for a week while the police prepared to do the capture. Before this could occur, however, the future King of Bohemia enters. He needs Holmes to retrieve a romantic photograph of the king with Irene Adler, a famous opera singer. A note has been sent to the King, threatening to release the photograph on the eve of his marriage. Holmes agrees to take the case, and as they say, “the game is afoot”. Before long, we are deeply involved not only with Holmes and Watson, the King, and Miss Adler, but with Moriarty and his gang: James Larrabee, his sister Madge, and the henchman Sid Prince. After a series of adventures, the action ends up at Reichenbach Falls, where Holmes and Moriarty struggle… and neither is ever heard from again.

As noted before, this is a combination of two stories. The portions of the story concerning Moriarty, escaping to the continent, and the adventure at Reichenbach Falls is drawn from “The Final Problem“. The story involving the King of Bohemia, Irene Adler, and the photograph is drawn from “A Scandal in Bohemia“. Certain aspects of the story are the invention of the playwright — in particular, the implied romance/affection between Holmes and Adler. This has troubled many Holmes-purists, for Holmes is portrayed in the books as having little interest in women. For the non-purists, however, the combination of the stories and the hint of the relationship work well and help drive the story to its conclusion. In general, I think that audiences (trained as they have been by TV and the police procedural) will find the story enjoyable — Holmes and Watson were the CSI of their day, using observational evidence to solve crimes.

“SH: TFA” is ostensibly a melodrama. In the hands of the wrong director, the melodramatic aspects can be overdone. Luckily, first-time director and regular REP stage manager Christina Gonzalez/FB (assisted by Kimbyrly M. Valis (FB)) did a great job of keeping the characters grounded and somewhat realistic. In this task, I’m sure she was also aided and mentored by her leads, who have directed many a REP show. It will be interesting to watch Christina grow as a director, as I’m sure we’ll see her directing at REP again.

I’ve already mentioned the leads, Mikee Schwinn (FB) as Sherlock Holmes and Ovington Michael Owston (FB) as Dr. Watson. These two, who are friends in real life, translated that friendship to the stage. Mikee did a great job of capturing Holmes’ observational skills and mannerisms, and “O” provided wonderful support as Watson. Their female foil was portrayed by Tiffany Michelle (FB) as Irene Adler. The actress conveyed not only the beauty required for the role, but the steely calculated demeanor of a consummate player (likely drawing on her poker playing experience).

The criminal team was led by Douglas Rory Milliron (FB) as Professor Moriarty. Milliron’s Moriarty had a bit of a steampunk feel to him, and was well-played and appropriate malevolent. As James Larrabee, William Reinbold (FB) was suitably convincing, although his role was written a tad more melodramatic. His sister, Madge, was portrayed by Pamela Portnoy (FB). She seemed a bit off as the maid (perhaps because she wasn’t a maid), but did great in her later scenes as the evil sister. Lastly, as the safecracker and all-around thug, character actor Brent Christiansen (FB) seemed to be having fun with the role. It is interesting to note that Christiansen is the only actor who was in the previous Sherlock Holmes outing back in 2009. Rounding out the cast was J. T. Centonze (FB) in various small roles (Policeman, Father Murphy, Swiss Man).

Turning to the technical side: This production marked the debut of a new set designer for the REP, Brian Annis (FB). The style was a little different from what we have seen before, but worked very well in establishing the scenes and locations. Gag props were developed by Kevin Lunt/FB. Costumes were designed by Tonya Nelson/FB of No Strings Attached Costumes (FB), and were fabricated by Tonya Nelson/FB, Rachel Nelson/FB, and Kevin Lunt/FB. They were effective, although those expecting to see a lot of deerstalker caps and Calabash pipes will be disappointed. Make-up and hair was by Rachel Nelson/FB. The lighting was by REP regular Tim Christianson/FB: it was effective and served to frame the mood well. Sound design was by another REP regular, Steven “Nanook” Burkholder/FB. The production stage managers were Vicki Lightner/FB and Johnny Schwinn/FB (who cleans up real well :-)).

“Sherlock Holmes: The Final Adventure” continues at REP East until October 20. It is well worth seeing. Tickets are available through the REP Online Box Office and via Goldstar Events. It is also worth friending REP on Facebook, so you can learn when shows are selling out.

REP has announced their 2013 season, and big changes are in store. Gone are the two summer “81 series” short-run production, to be replaced by a second full-run summer musical. The 2013 season, pending rights approval, is: “25th Annual Putnam County Spelling Bee“, “Boeing Boeing“, “To Kill a Mockingbird“, “God of Carnage“, “9 to 5: The Musical“, and “Play it Again, Sam“. This is a wonderful season, with productions that are perfect for the REP (Spelling Bee and Carnage, in particular) and others that make you wonder how the REP will pull it off (9 to 5, especially if you saw the execution on the Ahmanson’s stage). It should be great.

While we are talking about seasons, a short sidebar on season subscriptions. I realized last night why I like the three theatres where we do subscribe, and why we have chosen to subscribe there. It comes down to one word: family. REP is like family: “O”, Mikee, Johnny, and everyone at REP don’t treat their subscribers as simple patrons: they are family and friends, and you look forward to seeing them. At the Colony, Barbara Beckley is out there greeting everyone, introducing the shows, and creating that sense of family. Out at Cabrillo, Lewis Wilkenfeld (and Carole Nussbaum before him) do the same thing: they introduce the shows, they greet the audience and become part of your life. You want to help family, to support family, and you feel guilty discounting family. At many other theatres — the Ahmanson, the Pantages, and the Playhouse under Sheldon Epps — you are a patron. You don’t know the staff and the artistic directors. You are a cog in the wheel, not part of the family. Using discounts at these theatres doesn’t feel wrong; you’re not cheating family. This is a lesson that all theatres need to learn: make your patrons part of your family, and they will be there for you.

Upcoming Theatre and Concerts:  October brings some traveling for family with the bat-mitzvah of a cousin in Fresno, and Karen will be travelling for the Pacific International Quilt Festival in Santa Clara. Still, what’s a month without theatre, so… October will start out with “The Fantasticks“ at Theatre West on 10/6. That will be followed by “American Fiesta” at the Colony Theatre on 10/13, “The Book of Mormon” at Broadway LA/The Pantages on 10/27, and “1776” at Cabrillo Music Theatre on 10/28. Continuing the look ahead: November will bring “Moonlight and Magnolias” at REP East, which is booked for the end of the month. It may also bring “Seminar” at The Ahmanson Theatre (still undecided on ticketing; another possibility is “Ruddigore” at the Sierra Madre Playhouse) and may bring a concert performance of Raul Esparza at VPAC, especially if Erin flies in for it (he’s singing on her birthday). Non-theatrically, it will also bring “Day Out with Thomas” at OERM (certainly on some or all of Veterans Day weekend – November 10-11). Lastly, to close out the year, December has nothing formally scheduled (other than ACSAC), but will likely bring “Anything Goes” at the Ahmanson, and may bring “Judy Collins” at VPAC. Starting the look into 2013. Currently nothing is scheduled for January, but that’s sure to change as REP announces its dates for the 2013 season. February brings “You’re a Good Man, Charlie Brown” at Cabrillo Music Theatre and “I’ll Be Back Before Midnight” at the Colony. It may also bring “Backbeat” at the Ahmanson. March will likely bring “Catch Me If You Can” at Broadway LA/Pantages. I’m also keeping my eyes open as the various theatres start making their 2013 season announcements. Lastly, what few dates we do have open may be filled by productions I see on Goldstar, LA Stage Tix, Plays411, or discussed in the various LA Stage Blogs I read (I particularly recommend Musicals in LA and LA Stage Times).

Music: My Name is Barbra, Two (Barbra Streisand): “No More Songs for Me”