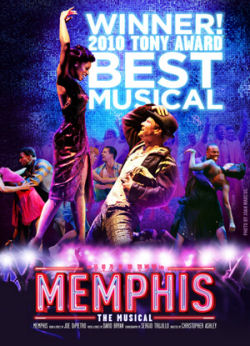 Race Relations and Rock ‘N Roll. This has been a popular subject for musicals. Examples abound: One of the underlying themes in the musical Hairspray (which we saw in 2004) is the integration of TV dance shows in Baltimore in the 1960s. It is also explicit in Baby It’s You (which we saw in 2009), which explores the relationship between the white producer of the Shirelles and a black songwriter. A third example is Dreamgirls (which I saw back in 1983), which also highlights the contrast between “black” and “white” music. All three of these shows popped into my mind at various points last night while we were at the Pantages Theatre to see the Broadway LA (touring) production of Memphis, the 2010 Tony Award Winner for Best Musical.

Memphis is a musical with two major themes. The first theme is a story of a white aficionado of “black music” — that is, rhythm and blues, which later became rock ‘n roll —  who wanted to promote that music to a larger audience. The second them is the story of a white producer falling in love with his black leading artist in Memphis in the 1950s. Some of it is even based on true events.

The basic story of Memphis is as follows (you can find a more detailed synopsis in the Wiki page). A white lover of “black” music, Huey Calhoun, starts frequenting Delrays, a club in the black section of Beale Street in Memphis TN, simply because he loves the music. He becomes enraptured with the singing of the sister of the owner, Felicia Farrell, and promises that he will get on the radio and will get her music heard. He starts by attempting to promote the “black” music at the local department store… and gets fired. He then talks his way onto a local AM station, where his show featuring black artists and a very improvised style becomes #1. His show encourages kids to go and listen to rhythm and blues and gospel, going so far as to encourage them to visit black churches. His relationship with Felicia continues, and he eventually gets her to perform on his show, where she becomes a hit. He is also falling in love with her, and on the way to a party at Delrays, proposes to her. As they kiss, they are seen by whites passing by… and (predictably) get beat up.  End Act I. In Act II, the relationship continues. Time has passed, and Huey has a TV dance show in Memphis featuring rock and roll and black dancers. Felicia’s career is also progressing, and a producer from RCA wants her to go to New York. She wants Huey to go, but he wants to stay in Memphis. She gets the producer to go see his show, but Huey rebels when the producers indicates he likes Huey as host, but the black dancers will have to be replaced by white dancers. His form of rebellion: kissing Felicia on-air. This is the end of Huey:  Felicia and Delray go to New York, and Huey ends up at a small radio station with no audience.

In developing this story, book author Joe DiPeitro (who also did “I Love You, You’re Perfect, Now Change” and “All Shook Up“) drew upon incidents in many stories. The character of Huey Calhoun was based primarily on a real Memphis DJ, Dewey Phillips. Dewey was the inspiration for the radio station (WHBQ), the persona of the hillbilly, the promotion of “black” music, the style of the TV show, and even the hinting of the color of someone by mentioning the high school they attended. However, there were also aspects of Alan Freed, another DJ of the era. From Freed, DiPietro also drew the notion of promoting black artists using the black artists themselves, the incident of playing black music at the department store, and the promotion of local concerts with black artists.  DiPeitro also drew upon the stories about Dick Clark, whose American Bandstand was supposedly successful in Philly because Clark knew how to present black music to a white audience with white dancers in an acceptable manner.

The arc of Huey Calhoun is an interesting one, filled with challenges and conflict that work well with musicalization. Alas, the supporting music (by David Bryan (of Bon Jovi)), while tuneful, often hits you over the head with the lyrics (by Joe DiPietro and David Bryan).  It does this primarily in the songs that attempt to mimic the music of the era and emphasize the race differences (as the LA Times critic noted, the worst offenders were in the opening, where the song “Whiter than White” by “Whitey White and the Whitetones” is introduced, and the song “Everybody Wants To Be Black On Saturday Night”. Many of the songs also don’t advance plot too well (contrast the substance of the songs with the songs in a Rodgers/Hammerstein or Sondheim piece). However, there are points where the songs do a wonderful job of illustrating the tensions in the characters. A particularly good example of this is the title song “Memphis Lives In Me”, which is great at illustrating why Huey cannot go to New York. It is in these moments that Memphis overcomes its material and soars. Thinking about it, what was missing were numbers for Felicia that exposed her soul and her desires (every other character had such numbers, looking back at things).

While the character of Huey had precedents in real life, the love story did not. I have been unable to find if there was any historical basis in the character of Felicia. My conclusion is that the love story was crafted into the piece to provide dramatic tension… and perhaps it here that is the story is the weakest. Whereas Huey Calhoun’s arc is believable, the supposed spark between Huey and Felicia never ignites on stage. Whether this is the fault of the writing, the directing, or the acting I’m not sure. My guess is that it is a plotting problem that could have been corrected, but that the other successes of the show overtook the need to get this right.

Independent of these problematic book aspects, however, the performances soar. This is particularly true in the performances of the leading players: Bryan Fenkart as Huey and Felicia Boswell as Felicia. Fenkart’s “hick” accent was perhaps a bit overplayed (I kept thinking of Scott Holmes‘ voice in Best Little Whorehouse Goes Public), his performance and characterization was spot on, and his singing — particularly in “Memphis Lives in Me” — was great. Boswell was also strong on stage and in her performance numbers (particularly “Someday”).

The supporting cast was also quite strong: Quentin Earl Darrington as Delray, Will Mann as Bobby, Rhett George¹ as Gator, and Julie Johnson as Gladys. Each gave strong acting performances, and surprising musical performances. Darrington excelled in “She’s My Sister”, George brought down the house in “Say a Prayer”, Mann was spectacular in “Big Love”, and Johnson had her moment in “Change Don’t Come Easy”. Although the material they had for developing their characters was slight, they did the most with what they had and were very successful with it.
(¹: Side note to Mr. George: If you are going to list your website in the program, please make sure you have paid it up and it hasn’t been hijacked by an adult sex website)

The production was directed by Christopher Ashley (assisted by Associate Director Adam Arian), who did a reasonable job of bringing the characters to life. As previously noted, I thought he could have done more to bring out the spark in the romantic story. However, sparks were certainly flying in Sergio Trujillo‘s choreography, which did a great job of exciting and firing up the audience (with additional credit to August Eriksmoen as dance arranger and Edgar Godineaux as Associate Choreographer). It was spectacular. The musical performances was also quite strong. Thanks here go to Christopher Jahnke, the music producer and supervisor, Daryl Waters, the co-orchestrator, Alvin Hough Jr. as Music Director/Conductor, and Michael Keller as Music Coordinator. Credit also goes to the great onstage Memphis band, which included Alvin Hough Jr and Darryl Archibald (of Cabrillo fame) on keyboards, Trevor Holder on drums, Dave Matos on guitar, Enzo Penizzotto on bass, Dan Fornero on trumpet and flugelhorn, Alex Iles on trombone and bass trombone, and Dick Mitchell and John Yoakum on reeds.

The technical side had its ups and downs. David Gallo‘s sets mostly worked, although it seemed a bit cramped at points with a frame that reduced the Pantages stage. There were also some problems with Ken Travis‘s sound design that left the sound muddied on the sides of the Pantages. The lighting by Howell Binkley was quite good and emphasized the mood quite well. The projections by David Gallo and Shawn Sagady worked well, especially of the news stories. Paul Tazewell‘s costumes and Charles G. LaPointe‘s hair and wig designs were excellent. Tripp Phillips was the production stage manager; Anna R. Kaltenbach was the stage manager, and Tiffany N. Robinson was the assistant stage manager.

“Memphis” continues at the Pantages through August 12. Tickets are available through the Pantages Website, but you can avoid the service charges by going in person to the Pantages Box Office. That’s what I do.

Upcoming Theatre and Concerts: Next week takes us to North Hollywood for  “I Caligula, An Insanity Musical” at Secret Rose Theatre in NoHo on August 11. The rest of the month is quite until “Play Dates” at REP East at the end of the month. As an aside: we will be vacationing in Palm Springs, so if anyone knows of live theatre going on there in August, let me know (we might go to Idyllwild Jazz in the Pines). In September theatre activity resumes, beginning with “Blame It On Beckett” at the Colony Theatre on September 1 and “Sherlock Holmes: The Final Adventure” at REP East on September 29. I”m also looking into “Silence: The Musical” at the Hayworth Theatre, which starts September 8 and runs through December, and “Xanadu” at DOMA, which starts September 7 and runs for about 3 weeks. October brings some traveling for family with the bat-mitzvah of a cousin in Fresno. It will also bring “American Fiesta” at the Colony Theatre, “The Book of Mormon” at Broadway LA/The Pantages, and “1776” at Cabrillo Music Theatre. Continuing the look ahead: November will bring “Moonlight and Magnolias” at REP East, which is booked for the end of the month. It may also bring “Seminar” at The Ahmanson Theatre (still undecided on ticketing) and a concert performance of Raul Esparza at VPAC, especially if Erin flies in for it (he’s singing on her birthday). Non-theatrically, it will also bring “Day Out with Thomas” at OERM (certainly on some or all of Veterans Day weekend – November 10-11-12). Lastly, to close out the year, December has nothing formally scheduled (other than ACSAC), but will likely bring “Anything Goes” at the Ahmanson, and may bring “Judy Collins” at VPAC. Lastly, what few dates we do have open may be filled by productions I see on Goldstar, LA Stage Tix, Plays411, or discussed in the various LA Stage Blogs I read (I particularly recommend Musicals in LA and LA Stage Times).