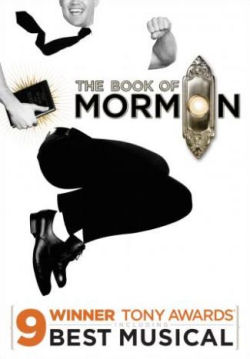 Hello. My name is Elder Guy, and I would like to share with you this most amazing show… (ding-dong)

Hello. My name is Elder Smith, and it’s a show that’s very different from any show you know. (ding-dong)

Hello. My name is Elder Brown. It’s a show that on the top of things will patently offend. (ding-dong)

Hello. My name is Elder Green. It makes fun of AIDS and Africans and fucking in the end. (ding-dong)

Hello. My name is Elder Jones. It’s a show about belief and faith and one amazing book. (ding-dong)

Hello. My name is Elder White. It’s a show that makes a point, if you simply give a look. (ding-dong)

Hello. My name is Elder Card. It’s touching, sweet, and anymore and I will barf my toast. (ding-dong)

OK. If you haven’t figured it out by now, last night we went to the Pantages to see “The Book of Mormon“. This is a show that, quite unexpectedly, took Broadway by storm. Its touring company is filling the Pantages, and seats for the show are hard to get and expensive (at least on weekends). What is it about this show that draws the audience in? What makes it a success?

Let’s start with the book. “The Book of Mormon” features book, music, and lyrics by Trey Parker, Robert Lopez, and Matt Stone. Parker and Stone are the demented geniuses behind South Park. Lopez is one of the folks behind Avenue Q. Is it any surprise that the show ended up with a story and a libretto that could be viewed as extremely offensive. The show makes fun of the rigidity of the Mormon religion; it makes fun a Africans dying of AIDS; it makes Africans fucking babies to get rid of their AIDS; it makes fun of female circumcision; it makes fun of African warlords who shoot and ask questions later; and it makes fun Jesus and God and Joseph Smith and Brigham Young. The show, on the surface, is as offensive as “Springtime for Hitler”. Oh, right, it also makes fun of Hitler.

But the music, Officer Lockstock, is so nice. Yes it is, Little Sally. Yes it is.

“The Book of Mormon” is squarely in the genre of shows such as The Producers, Urinetown, and Avenue Q. It wears its offense on its sleeve, but makes a point that is much more. BofM tells the story of two missionaries: Elder Kevin Price and Elder Arnold Cunningham who are sent to Africa on their Mormon Mission to covert the natives. Price is a top Elder, looked up to by everyone. Cunningham is a screwup who makes up stories, and has never actually read the Book of Mormon. Once in Africa, they discover that the Mormons haven’t converted anyone. The village is ravaged by AIDS, and everyone believes that the only way to cure it is to fuck virgins… and as there are no virgins, babies will do. The village is ruled by a warlord who believes all females should be circumcised (have their clits removed). There is no hope, and life has no value. Price is destroyed by this; he becomes unhinged and attempts to run off. Cunningham, on the other hand, discovers how to manipulate the stories he tells to restore the faith of these people. He discovers how to present the Book of Mormon in such a way that it gets the village positive, hopeful, and moving in the right direction. He converts the whole village to the church, including the daughter of the leader, Nabulungi. Of course, he does this by lying and conflating Mormon theology with all the canon of science-fiction stories, and adapting things to address the specifics of the village. His answer is not “the book doesn’t address this”, but rather “of course the book addresses this, just look (uh) here where it says that…”. In doing this, he demonstrates what faith is, gives the village back its power, and teaches Elder Price what a real mission and faith is.

But this is not a show for everyone, and I think everyone will react to it differently. Last night, we saw parents bringing little kids to the show. Wrong. They will pick up on the offense, and not understand what is said. I also wouldn’t take my mother-in-law. People without a sense of humor just won’t get it — the offense will shut them down and close their minds. Some people will find this laugh out loud funny. Others will appreciate the various homages and pastiches, the subversive humor, and how that humor is used to an end. In short: this is just like South Park. It’s not for everyone, and everyone will not get it. Leave the innocent and clueless at home.

Now that we’ve talked about the story, let’s look at the performance. Although this is mostly an ensemble piece, there are some notable standouts. In the lead positions we have Gavin Creel at Elder Price and Jared Gertner as Elder Cunningham. Creel does get a few chances to show off his amazing voice (particularly in “I Believe”), but his Price is mostly the optimistic faithful missionary. Creel does a great job of conveying a remarkable belief in himself. Gertner’s Cunningham is quite the opposite.Intentionally, the character’s singing voice is not smooth and suave. Cunningham lacks faith in himself, and will do or say whatever is necessary to get people to hear him and to like him. Gertner has great comic timing and is able to pull off schlemiel role quite well. Together, the two of them make a great comic team.

Also in a lead position is Samantha Marie Ware as Nabulungi (who Elder Cunningham continually mispronounces as any multisyllabic N-word you can think of). This woman is not only beautiful, but boy can she sing. She’s just a delight to hear… add to this great acting skills, and I hope she goes far. That said, one thing I noticed reading the Playbill bio of Ware, as well as the other black actors in the cast, is the dearth of good musical theatre roles for black actors. Reading the bios, you see the same shows, over and over. Lion King. Scottsboro Boys. Fela! It appears that musicals with large numbers of black roles are few and far between, and this is a bad thing.

The production was directed by Casey Nicholaw and Trey Parker. These two did a great job of bringing the fun out of the actors, and getting them to exaggerate their behavior where appropriate (especially for all the Mormon missionaries). Marc Bruni and Jennifer Werner (Broadway) were the associate directors. It was choreographed by Casey Nicholaw, with dance arrangements by Glen Kelly. John MacInnis was the associate choreographer. The movement for the show was quite creative; no where was this better seen than in the “Joseph Smith American Moses” internal production. Orchestrations were by Stephen Oremus (Music Supervisor) and Larry Hochman, and were very good. Brian Usifer was the associate music supervisor. Cian McCarthy was the music director and conducted the nine person orchestra (Cian McCarthy – conductor; Remy Kurs – associate conductor; McCarthy and Kurs – keyboard; Trey Henry – bass; Giancarlo de Trizio – drums; Paul Viapiano – guitar; Kathleen Robertson – violin/viola; Dick Mitchell – woodwinds; Wayne Bergeron – trumpets; and Andry Martin – trombones).

Turning to the technical: the scenic design was by Scott Pask and did a great job of conveying the location. I was particularly impressed by the utility of the African set, and the whole set for the Spooky Mormon Hell Dream. Costumes by Ann Roth were very good, and were particularly clever in the “Turn it Off” number. The lighting by Brian MacDevitt did a great job of conveying the mood; I particularly noticed the extensive use of movers and LED lights and the lighter use of conventional leikos. The sound design by Brian Ronan worked well in the Pantages, which is something that cannot always be said. Kimberly Fisk was the Production Stage Manager, with Michael Pule as Stage Manager and Steve Henry as the assistant stage manager.

“The Book of Mormon” continues at the Pantages through November 25. Tickets are available through the Pantages Box Office.

Observational Note: It is really odd being in Hollywood just before Halloween. The costumes you see!

Dining Note: Before the show, we hit The Kansas City BBQ Company in North Hollywood. OK, but nothing to write home about. We’re still sticking with Moms or Rogers Rib Shack.

Upcoming Theatre and Concerts:  This afternoon brings another show:  “1776” at Cabrillo Music Theatre on 10/28. November is much lighter in terms of theatre. At the beginning of the month, my wife will be going to VPAC to see Ballet Folklorico (but you probably won’t see a review here). That weekend may also bring “Seminar” at The Ahmanson Theatre (still undecided on ticketing; another possibility is “Ruddigore” at the Sierra Madre Playhouse), although that is increasingly unlikely. The following weekend won’t be available for theatre, as we’ll be out working at “Day Out with Thomas” at OERM. The next weekend sees us at VPAC for a concert performance of Raul Esparza. November will close with “Moonlight and Magnolias” at REP East. December sees us at the Colony for “The Morini Strand” on 12/15 (if it happens; the Colony is having major financial trouble). December will also likely bring “Anything Goes” at the Ahmanson. It will also bring another concert: “Judy Collins” at VPAC. Starting the look into 2013. Currently nothing is scheduled for January, but that’s sure to change as REP announces its dates for the 2013 season. February brings “You’re a Good Man, Charlie Brown” at Cabrillo Music Theatre and “I’ll Be Back Before Midnight” at the Colony. It may also bring “Backbeat” at the Ahmanson. March will likely bring “Catch Me If You Can” at Broadway LA/Pantages. I’m also keeping my eyes open as the various theatres start making their 2013 season announcements. Lastly, what few dates we do have open may be filled by productions I see on Goldstar, LA Stage Tix, Plays411, or discussed in the various LA Stage Blogs I read (I particularly recommend Musicals in LA and LA Stage Times).