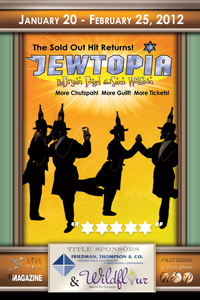 Last July, as part of its “81 Series”, Rep East Playhouse presented a little play that proved immensely popular (it sold out its entire run before it even opened): “Jewtopia“. It was so successful that REP brought it back as the first show of their 2012 season. As season subscribers, this presented us with the opportunity to see it again. Back when I purchased our subscription I had scheduled last night for the show, and so we went (alas, this meant I had to miss a 1970s era 50th anniversary high school party scheduled a few weeks ago). I’m actually glad I went–REP (as usual) did a great job with the show; it is rare to find a comedy that is as funny the second time around, and this show was.

Jewtopia tells the story of Chris and Adam, two young single men in their 30s, looking for love. Chris, more formally Chris O’Connell, a non-Jew, wants to find a good Jewish girl to marry so he never has to make a decision again… but the Jewish girls are uninterested in him because he’s a goy. His best friend, Adam Lipschitz, has the opposite problem: he’s more interested in shiksas (non-Jewish girls), but has the family pressure to find a Jewish girl to marry, so he needs to find one he likes. So these two make a pact: Adam will teach Chris how to be Jewish so that he can get the Jewish girl he wants, while Chris will introduce Adam to Jewtopia, the land of Jewish girls, and teach him how to attract a Jewish girl who will finally say “yes, yes, oh yes”. The rest of the play is the story of that question: Chris and his journey to convince the family of Alison Cohen that he is Jewish-enought for their daughter… and Adam and his journey through 155 Jdate dates to find a Jewish girl that he likes. Along the way, every (and I mean every) stereotype of Jewish families is exposed, ripped asunder, and exaggerated for humor and amusement (as examples, Jews never own tools, and if we do, we don’t know where they are or how to use them; Jews always are complaining about one medical problem or another, etc.). Essentially, Jewtopia is a series of comic sketches highlighting what it means to be culturally Jewish. The traits they highlight may be exaggerated, but they are there and are touched upon out of a sense of love, not mocking. They quest they describe is true. I remember it from my college days, as well as from talking to my friends. If you are Jewish, you’ll enjoy this play and see yourself. If you are not Jewish… well, bring a Jewish friend to explain things to you.

REP could have taken the easy approach: used the same cast and sets from the July production. They didn’t. The only holdovers from July were the directors and three actors (who were in smaller roles). This was essentially a new production, and the freshness elevated it from a retread. It also provided the show with a lot of energy, surely helped by the hefty-helping of local references tossed into the script.

Leading the cast were Michael Hanna as Adam Lipschitz and Joe Roselund as Chris O’Connell. Of these two, I found Roseland slightly stronger. Both were comfortable in and having fun with their roles, and they brought that energy to the stage. Rounding out the cast, in various smaller roles, were: Liza Baronæ (Crazy Girls/Jill), Barry Agin (Rabbi Schlomo), Laura Lanoil (Marcy Cohen), Bonnie He (Rachel Kahn/Nurse), Darel Roberts (Dennis Lipschitz), Laurie Morgan (Arlene Lipschitz), and Michael Levine (Grandpa Irving). Bonne He and Darel Roberts were reprising their roles; He in particular was having quite a bit of fun in her various characters. Michael Levine was reprising half of his original role, and one gets the sense that playing a dirty old man comes quite easily to him :-). Liza Baron was  quite good in her various characters–I particularly enjoyed her personification of “Firetushy”.
[æ denotes members of

The production was directed by Marlowe Weisman, assisted by Bill Quinn. The new set was designed by Ovington Michael Owston (who is also Artistic Director and a producer of the production) and worked well. Costumes and props were by Lisa Melcombe-Weisman and Christina Gonzalez (who was also stage manager). Steven “Nanook” Burkholder was the sound designer (and I applaud his choice of music — I’d love to get a track list). Tim Christianson did lighting design. Mikee Schwinn designed the program and videos, and was also a producer.

The run of “Jewtopia” concludes next weekend, February 25. Tickets may be available through the REP Online Box office. Next up at the REP is “Journey’s End”. Set in the trenches at Saint-Quentin, Aisne, in 1918 towards the end of the First World War, Journey’s End gives a glimpse into the experiences of the officers of a British Army infantry company in World War I. The entire story plays out in the officers’ dugout over four days from 18 March 1918 to 21 March 1918. Journey’s End runs from March 16-April 14.

Upcoming Theatre, Concerts, and Dance: Later today we’re in Sierra Madre for “On The Twentieth Century” at the Sierra Madre Playhouse. February concludes with “Old Wicked Songs” at the Colony Theatre. March is equally busy, beginning with “How to Succeed in Business without Really Trying” at Van Nuys High School (March 2-3 and 8-10; we’re likely going on 3/2), and Bernadette Peters in concert at the Valley Performing Arts Center on March 3. March should also bring “American Idiot” at the Ahmanson, and “Journey’s End” at REP East. March will conclude with Tom Paxton in concert at McCabes on 3/31. Continuing the look ahead, April will bring “Billy Elliot” at the Pantages, the Southern California Renaissance Faire, “Once Upon a Mattress” at Cabrillo, and “Dames at Sea” at the Colony.  May will bring “The Great American Trailer Park Musical” at REP East, the senior dance show at Van Nuys HS, and may bring “Heiress” at the Pasadena Playhouse, “Follies” at the Ahmanson, and the Spring Railfestival at Orange Empire Railway Museum. As always, open dates are subject to be filled in with productions that have yet to appear on the RADAR of Goldstar or LA Stage Alliance.

One Reply to “Revisiting Jewtopia”