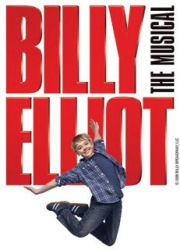 This has been a crazy weekend. I’ve already talked about the whirlwind trip to Cal, but I neglected to tell you how it started: a trip to the Pantages to see a dancing boy.

Our crazy day Saturday actually started with 8pm non-refundable, non-exchangable tickets at the Pantages; further, while we were seeing Billy Elliott at the Pantages, Erin was seeing American Idiot downtown with a friend. Add to this a dinner that was more expensive than I expected (but good), a back that was (and still is) acting up, and some other unnamed factors, and I wasn’t in the best of moods going in. So what did I think of the show? Pretty good, in spite of all that.

Billy Elliot: The Musical basically tells the same story as the original movie did: It is the story of a boy who discovers he loves ballet dancing, in the context of a hard-scrabble Northern England town where the life is coal mining, and that life has been thrown in limbo by the national strike of the coal miners against the UK government. So you have two parallel stories: a boy discovering dancing, and a town where there miners are facing the British police, hating Margaret Thatcher, and seeing the end of a way of life. They seem like incongruous stories, but somehow they work together, augmented by the music and the story. Luckily, the stage version featured a book by the author of the movie, Lee Hall, who also did the lyrics. The energetic music was by Sir Elton John.

What makes this production is the dancing. In particular, the dancing of the young Billy. This effort is so strenuous that there are four Billys that rotate over the various performances. “Our” Billy was Zach Manske, a 12 year old from Minnesota who did a remarkable job in full-on ballet sequences, as well as the expressive “Angry Dance”, remarkable tap numbers. You name it, this boy could dance it.

Another remarkable performer was the actress that played Mrs. Wilkinson, Leah Hocking. Hocking had a remarkable singing voice: clear and strong. She could also dance and act quite well. This came out from the start during her first number, “Shine”.

Few other characters “shine” individually. Cameron Clifford, who was “our” Michael, did a wonderful job as the cross-dressing lad who was Billy’s best friend. Michael’s signature song, “Expressing Yourself”, is perhaps the underlying theme of the show: do what you love, be yourself. The number is a remarkable transformation and a joy to watch.

The other interesting transformation in the show is achieved by Rich Hebert, playing Dad. Here the transformation is in the character, who goes from being a strong union miner with appropriate stereotypes to one who is 100% behind his son’s ballet. Hebert plays this well.

Turning to the technical: the set was designed by Ian McNeil: it is perhaps my only complaint with the show. To work with the various tour stages, it uses a border to shrink the wide Pantages stage, and then uses techniques to reduce the height of the stage during many numbers. This gives a cramped feeling that made it harder to watch things. Design supervision was by Edward Pierce. Lighting was by Rick Fisher (assisted by associate lighting designer Kristina Kloss and Daniel Walker) and was effective for the task. The sound design by Paul Arditti (assisted by Tony Smolenski IV, associate sound designer) was good (with good sound effects), but was hampered by the built-in sound dampening of the Pantages theatre that turns everything into muddied noise–this was especially a problem for the Northern England dialects, which are difficult to understand to begin with. Costumes were by Nicky Gillibrand (assisted by Claire Murphy and Rachel Attridge, associate costume designers in the UK and US, respectively)–they conveyed the time period quite well. Wigs and hair design were by Bernie Ardia.

Musical Supervision was by Martin Koch and David Chase. Susan Draus was music director and conductor.

“Billy Elliot: The Musical” continues through May 13. Hint: Go to the box office and get the $25 seats if they are available. They were on the side and perfectly acceptable, and if you go to the box office you don’t have to pay Ticketmaster extortion fees.

Upcoming Theatre, Concerts, and Dance: Next weekend brings student-directed plays at Van Nuys HS (Erin is in one of them), plus I’m judging an ethics competitation at UCLA, and hoping to book tickets for the new production of “Working” at The Production Company in Hollywood (haven’t seen the show in years, opens 3/16). The last weekend in April sees us out in Thousand Oaks for “Once Upon a Mattress” at Cabrillo; I’m also hoping to book tickets for “The Heiress” at the Pasadena Playhouse on that Sunday (heard it on LA Theatre Works and it sounds good). May begins with “Dames at Sea” at the Colony.  It also brings the senior dance show at Van Nuys HS, the Spring Railfest at Orange Empire, “The Great American Trailer Park Musical” at REP East, and it may also bring “Follies” at the Ahmanson. Oh, and May also has my daughter’s HS graduation. June is more open, but does feature both “Addams Family” and “Million Dollar Quartet” at the Pantages. As always, open dates are subject to be filled in with productions that have yet to appear on the RADAR of Goldstar or LA Stage Alliance.

One Reply to “Dance, Exploded, On Stage”