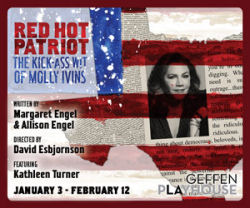 Back in 2003, Molly Ivens wrote “Okay, we cut taxes for the rich and so we have to cut services for the poor. Presumably there is some right-wing justification along the lines that helping poor people just makes them more dependent or something. If there were a rationale Bush could express, it would be one thing, but to watch him not see, not make the connection, is another thing entirely. Welfare, Medicare, Social Security, food stamps–horrors, they breed dependency. Whereas inheriting millions of dollars and having your whole life handed to you on a platter is good for the grit in your immortal soul? What we’re dealing with here is a man in such serious denial it would be pathetic if it weren’t damaging so many lives.”

This is someone whose wit and insight we need today. Someone who has the ability to cut through the bullshit of political rhetoric, who is proudly liberal (just like Jesus would be, as she noted in another essay), and is willing to call people on their idiocy. One could just imagine what she would make of the current Tea Party efforts and the crop of Republican candidates. One could imagine what she would say about the Occupy movement and the importance of their message about inequality of wealth (as she has written about it before). Alas, we don’t have this wit and insight, as she died in 2007. However, “Red Hot Patriot: The Kick-Ass Wit of Molly Ivens“, which we saw this afternoon at the Geffen Playhouse, provides a great reminder and a great facsimile.

“Red Hot Patriot” is basically a one-woman show of Molly Ivens (portrayed by Kathleen Turner). It starts out with Ivens attempting to write a column about her father, “General Jim” and getting stuck. This turns her into reminiscing about her life and the political characters therein, moving through all the newspapers she worked at. This provides the opportunity to work in a lot of the classic Ivens lines, such as Jim Hightower’s line when he was informed that Governor Bill Clements was studying Spanish: “Oh, good. Now he’s be bi-ignorant.” Special attention is paid, however, to Shrub (her name for George W. Bush) and the Texas State House, which gave her ample ammunition. The telling closes with some stories about her battle with breast cancer, which ultimately took her life.

Turner’s portrayal of Ivens is pretty spot-on. At our performance, Turner’s already husky voice sounded hoarse–I don’t know if this is part of the character, but Ivens evidently did have a husky voice. Turner is relaxed on stage, costumed in red boots, jeans, an a jeans-shirt, with red hair. You can see an image of her in character here. It was a very good and entertaining performance. Turner is supported by Matthew Van Oss as the silent copyboy.
[All actors are members of

Turning to the technical side. The set (designed by John Arnone) was simple: a desk for Ivens, a teletype machine, and a collection of old metal desks and chairs stacked in the back. This design was augmented by projections by Maya Ciarrocchi; the two combined very effectively. Lighting was by Daniel Ionazzi and was simple but good. Costumes (already described) were by Elizabeth Hope Clancy, with wig design by Paul Huntley. Original music and sound design was by Rob Milburn and Michael Bodeen. The music was good, but the sound could have been more effective–but this may be a problem with the facility.

“Red Hot Patriot” was written by Allison Engel and Margaret Engel, and directed by David Esbjornson. Mary Michele Miner was the Production Stage Manager, and Susie Walsh was the Assistant Stage Manager.

A note about the theatre. The Geffen Playhouse is what used to be the Westwood Playhouse. It’s pretty, but I wasn’t that impressed with the facility. The hard brick walls inside lead to a lot of sound bouncing. We also had an older crowd at this show (common for matinees), meaning that (a) they couldn’t figure out how to turn off their cellphones; (b) couldn’t figure out how to turn them off once they started ringing during the show (sigh), and (c) had their amplification headsets turned up on high so that everyone could hear the feedback and an echo of the performance.

“Red Hot Patriot” continues at the Geffen until February 12, 2012. Tickets are available through the Geffen Box Office; you may be able to get a discount code through Theatremania.

As we’re speaking of theatre… today I got our renewal notice for the upcoming 2012-2013 Colony Theatre season, so let me share it with you: (1) “The Savannah Disputation” by Evan Smith, West Coast Premiere, June 13-July 8, 2012; (2) “Blame It on Beckett” by John Morogiello, West Coast Premiere, August 8-September 2, 2012; (3) “American Fiesta” by Stephen Tomlinson, Los Angeles Premiere, September 26-October 21, 2012; (4) “The Morini Strad” by WIlly Holtzman, West Coast Premiere, November 14-December 16, 2012; (5) “I’ll Be Back Before Midnight” by Peter Colley, Los Angeles Premiere, February 6-March 3, 2013; and “Falling for Make Believe“, World Premiere, Book by Mark Saltzman, Lyrics by Lorenz Hart and Music by Richard Rodgers (a new musical developed by the Colony that looks to be a jukebox musical). Subscription rates are reasonable–between $222 and $132 for Saturday evenings (non-opening night).  They don’t yet have up the subscription page.

Upcoming Theatre, Concerts, and Dance: January theatre continues in two weeks with “Art” at the Pasadena Playhouse on January 28. February is busier. It begins at Van Nuys High School, with the Senior and Alumni Dance performances on February 2-3. “God of Carnage” at ICT Long Beach follows on February 5. The next weekend sees us in Thousand Oaks for “Ring of Fire” at Cabrillo Music Theatre on February 11. The third weekend takes us to Saugus for “Jewtopia” at REP East. February concludes with “Old Wicked Songs” at the Colony Theatre. March is equally busy, beginning with “How to Succeed in Business without Really Trying” at Van Nuys High School (March 2-3 and 8-10; we’re likely going on 3/2), and Bernadette Peters in concert at the Valley Performing Arts Center on March 3. March should also bring “American Idiot” at the Ahmanson, and “Journey’s End” at REP East. March will conclude with Tom Paxton in concert at McCabe on 3/31. Continuing the look ahead, April will bring “Billy Elliot” at the Pantages, the Southern California Renaissance Faire, “Once Upon a Mattress” at Cabrillo, and “Dames at Sea” at the Colony. As always, open dates are subject to be filled in with productions that have yet to appear on the RADAR of Goldstar or LA Stage Alliance.