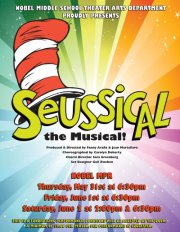 Last night, we went to go see “Seussical–The Musical” at Nobel Middle School in Northrdge. Now, I’m sure your first question is… why? After all, our daughter has graduated high school, we have no other kids, so why would we willingly go to a middle school to see a musical. You’re probably thinking we are crazy. Trust me: we’re not. This little middle school does damn fine performances equaling or bettering many high schools and coming close to small regional productions. Plus, the people behind the program are just wonderful, and seeing how it was these people that were the teachers that were the initial “spark” for our daughter in school, we just had to go.

Before I go into the specifics of this production, I want to talk about the program itself. Back in 2005, there was no drama program at Nobel–at least nothing that presented shows to people. That changed in 2006, when two hard-working English teachers, Fanny Araña and Jean Martellaro, revitalized the program. Our daughter was in that first show, An Evening of Silverstein, and it touched a nerve for her. She was involved in every show thenceforth while at Nobel; she remained involved while at Van Nuys. It was the reason she went to Van Nuys HS (she loved working in theatre); it gave her friends and self-confidence. I think it was the “nudge” that turned her into the woman of today.

Now, that first show wasn’t all that fancy. There were a few lights on a light bar on the side, plugged in with extension cords because they couldn’t use the lights in the building. There was little amplification, and you couldn’t hear the kids. Sets were simplistic. The program wasn’t supported by the administration; in fact, it seemed as if the administration was actively hostile at times. Over the years, this program has grown and grown and become more professional. In Spring 2008 for Grease, there were professional-quality sets. Since then, the quality of the shows has continued to improve. They’ve got full theatrical lighting (paid for by the program or grants), a full lighting board and sound board with wireless microphones. They had spectacular sets. They are training students not only on acting and singing, but on the technical and backstage aspects of the production. They had remarkable costumes. All this in a drama progam at a Math-Science-Technology magnet. Even the administration seems to have turned around. Although there are still problems, I now see the school promote the drama productions and it has become something the school is proud of. All this is due to the work of Fanny and Jean and the parents, children, and others they have loved and brought into their orbit. These two women have made this program, and I just love them (both as teachers, and as really great people).

Turning to the show itself. This is one we’ve seen before–at the Teen Drama Workshop at CSUN. “Seussical” is a musical based on the Dr. Seuss books, with music by Lynn Ahrens, Book and Lyrics by Lynn Ahrens and Stephen Flaherty, and co-conceived by Lynn Ahrens, Stephen Flaherty, and Eric Idle. The story basically combines “Horton Hears a Who” with “Horton Hatches an Egg”, with a number of other Seuss stories and characters thrown in for good measure. If you are familiar with the two-act version of the cast album, this is a cut down, one act version that preserves the basic story, but cuts out some of the more extraneous stuff, such as the Butter Battle, and the environmental subplot (it appears to be the Jr. High/Middle School version).  It is a great show for middle school: it supports good characters, lots of music, and lots of positions for kids.

Nobel did a great job with the show. I really couldn’t detect acting problems–there wasn’t the overacting you often see in HS productions. There was just good storytelling and kids having fun. The singing was mixed–some good, some weaker–but this is what you get in middle school with kids that aren’t going into that career. It was a step above past productions–this is likely due to the introduction of a choral director, Sara Greenberg. I’ll go into the tech in a bit.

Some of the kids performances were outstanding. Particularly notable was Michael Dager as Horton the Elephant: this young man could sing well, and could act well, conveying his emotion to the audience clearly. Also mostly strong were Julia Trites as the Cat in the Hat, Jessica Bell as Gertrude McFuzz, Jenny Tuell as the Sour Kangaroo. The acting of these three was all great, and for the most part, their singing was strong and spot on. As Jojo, Jordan Vasich started out weak, but once he moved into the real Jojo role, was pretty good. A number of other kids caught my eye with their acting–particularly Deven Streeton at Thing1, Megan Chu as Thing 2, the twins (Amanda and Jessica Wilheim) who played the baby kangaroos, and whichever citizen of Whoville was wearing the glasses.  These youngsters were just fun to watch.

The production was directed by Jean Martellaro and produced by Fanny Araña. Choreography was by Carloyn Doherty. Choral direction by Sara Greenberg. No credit was provided for the recorded music.

Turning to the technical: Nobel has improved 200% in terms of light and sound. Going from the early days of stand up microphones at the front, with some light stands on the side that kept overheating and no controls for either to last night’s show: with multiple standard theatrical lights both on the sides and on top in front of the stage, as well as overhead on the stage, with a full lighting and sound board. Credit to this improvement goes to the technical directors, Fanny Araña and Brian Bengler. Brian also did lighting and sound design, and other than a few glitches, it was pretty good (and in many ways, stronger than I’ve seen at Van Nuys). The spectacular sets were designed by Gail Zweben, stepping in for regular designer Dennis Kull, who was unable to do the show. These sets were clever, multilevel (something you rarely see in middle school), well constructed, and took great advantage of black lighting. The costumes were extremely clever, and were the work of a large number of people. Also spectacular were the fish puppets — I think these had the audience in awe.

ETA: You can see some wonderful pictures of the production here.

Upcoming Theatre, Concerts, and Dance: I may see if I can get last-minute tickets to  “Follies” at the Ahmanson for tonight. Rounding out June we have “Addams Family” at the Pantages on June 15 and “Million Dollar Quartet” at the Pantages on June 22, as well as the Palisades High School mega-picnic and the Wilshire Blvd Temple Camps 60th Anniversary. July features “The Savannah Disputation” at the Colony, “The Laramie Project” at REP East, and “Meet Me In St. Louis” at Cabrillo. August is more open, but will bring “Memphis” at the Pantages and “Playdates” at REP East.  As always, open dates are subject to be filled in with productions that have yet to appear on the RADAR of Goldstar or LA Stage Alliance.

3 Replies to “Revisiting a Friend in Dr. Seuss’ World”