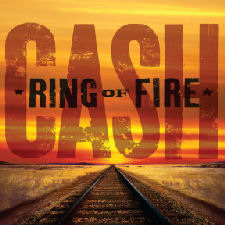 Growing up, I looked down on country music. I stereotypically assumed it to be all twangs and songs about pickup trucks and such. My musical interests were PP&M, cast albums, and era-appropriate rock. As I got older, my musical tastes have broadened substantially, and now are pretty wide ranging. I’ve grown to appreciate country and its connection to folk–especially bluegrass music and older country stylings (I’m not currently into some of the more recent country artists, although I’m not precluding it in the future).

I mention all of this as way of explanation: I was never a Johnny Cash fan growing up: he was that dour man in black. In the last few years I’ve grown to appreciate the contributions of Johnny Cash–especially his earlier sound–and his importance to country music and the broader field of pop music. So while another pop icon was dying, we were in Thousand Oaks at the Cabrillo Music Theatre seeing the Johnny Cash musical, “Ring of Fire“.

“Ring of Fire” is a 2006 musical developed by conceived by William Meade and created by Richard Maltby Jr. (who has experience with jukebox musicals, going back to the granddaddy of the subgenre, “Ain’t Misbehavin’“). In it, four actor/musicians and an on-stage band–who also act and sing the songs–roughly tell the story of the life of Johnny Cash by stringing together a number of Cash’s songs (in a manner similar to Ain’t Misbehavin’ did for Fats Waller). No single actor consistently portrays Cash throughout, although they do portray him (as well as his wife, June Carter Cash) in various songs. The songs include most of his major hits, opening with “Country Boy”, and closing with “Hey Porter”. In short, there is no formal book, although there is a story, and the music has the capacity to soar and get your feet tapping.

As a result, what makes or breaks a production of “Ring of Fire” is the quality of the performers, and I’m pleased to say that the performance quality of the Cabrillo team is excellent. It is difficult to separate out individuals, as this is a true ensemble, but I’ll try. The four main performers are Trenna Barnes, Troy Burgessæ, Jason Edwardsæ, and Kelli Provartæ. Edwards also directed the production. All are wonderful singers, and as the number “I’ve Been Everywhere” showed, all can play the guitar. I was having fun watching their faces during their performances–this quartet appears to really love this music and to love performing it. Of equal status with the actors were the official band–who often led numbers, sang numbers, and participated equally onstage. The band consisted of John Foley (guitar, harmonica… and one of the authors of Pump Boys and Dinettes), Mark San Filippo (drums), Brantley Kearns (fiddle), Jeff Lisenby (keyboard, accordion… and musical direction), John W. Marshall (bass guitar), and Brent Moyer (guitar, trumpet). As with the actors, all were excellent. I was particularly impressed with John Foley’s guitar work, Brantley Kearns’ fiddlin’, and especially, the bass-work of John W. Marshall (which was astounding). [ETA: Another nice article on the band may be found in this article from the Musicals in LA blog.
[æ denotes members of

Turning to the technical: the scenic design was by John Iacovelli, and consisted of a circular stage platform, a projection screen, and a country musician’s cabin. Lighting design was by Jean-Yves Tessier and was clean and effective. Sound design was by Cabrillo-regular Jonathan Burke. Costume design was by Trish Clark who created wonderfully appropriate period costumes for the Arkansas Repertory Theatre production that were reused here. As previously noted, Jason Edwards served as the director, assisted by Jane Lanier (article), and Jeff Lisenby served as musical director. Cabrillo-regular Allie Roy served as production stage manager, assisted by Jessica Standifer. Lewis Wilkenfeld is the artistic director of Cabrillo Music Theatre.

Upcoming Theatre, Concerts, and Dance: Next weekend has two shows: Saturday night we’re in Saugus for “Jewtopia” at REP East; the following afternoon we’re in Sierra Madre for “On The Twentieth Century” at the Sierra Madre Playhouse. February concludes with “Old Wicked Songs” at the Colony Theatre. March is equally busy, beginning with “How to Succeed in Business without Really Trying” at Van Nuys High School (March 2-3 and 8-10; we’re likely going on 3/2), and Bernadette Peters in concert at the Valley Performing Arts Center on March 3. March should also bring “American Idiot” at the Ahmanson, and “Journey’s End” at REP East. March will conclude with Tom Paxton in concert at McCabes on 3/31. Continuing the look ahead, April will bring “Billy Elliot” at the Pantages, the Southern California Renaissance Faire, “Once Upon a Mattress” at Cabrillo, and “Dames at Sea” at the Colony. As always, open dates are subject to be filled in with productions that have yet to appear on the RADAR of Goldstar or LA Stage Alliance.