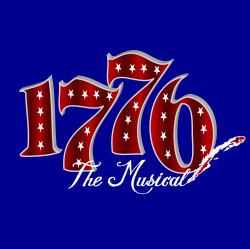 The last few weeks we have all been inundated with politics. It comes to us over the airwaves, over the Internet, over the phones. Our friends talks to us about it, and it fills our Facebook feeds. It is even on our stages with various productions, including the one we saw today: Cabrillo Music Theatre’s production of “1776: The Musical“.

It’s been a while since we’ve seen 1776; the last time was the Actors Co-Op production in 2008. This was our first “full stage” production; in some ways, I prefer 1776 on the small stage. Still, Cabrillo did a great job with the show, and I heard things in the show that echoed very differently than they did in 2008.

“1776” was produced on Broadway in 1969 and feature a book by Peter Stone (who did a number of other plays), and music and lyrics by Sherman Edwards (his only musical). It tells the story of what would normally not be viewed as a musical event: the events surrounding the Continental Congress’s Declaration of Independence. The lead character is John Adams, firebrand delegate from Mass., who is attempting to convince Congress to vote for independence. With his ally Benjamin Franklin, he convinces Thomas Jefferson to write the declaration, and then works to convince the other delegations, suffering moments of despondence along the way. The only female roles are that of Abigail Adams, which whom John has discussions in his head, and Martha Jefferson, who serves to eliminate some (uhh) “writers block” that Thomas Jefferson has. The play, although quite long (just under 3 hours), has delightful music, although it is not evenly spaced — there are along stretches of mainly dialog, making this much more a “play with music”. There are also points where the anti-war nature of the play comes through, especially in the song “Mama, Look Sharp” about the horrors of battle.

We sing hosanna, hosanna
To our breeding and our banner
We are cool

We sing hosanna, hosanna
Enblazoned on our banner
Is keep cool

What we do we do rationally
We never ever go off half-cocked, not we
Why begin till we know that we can win
And if we cannot win why bother to begin?
We say this game’s not of our choosing
Why should we risk losing?
We are cool

Listening to this song, I’m hearing the words of the 1% — the people that were afraid to take bold action, the people that wanted to preserve their land and property and privilege. These were also the people that were more concerned about protecting their economic power than doing the right thing. They would have been happy to keep with the old ways; the ways that weren’t working.

To me, this is the beauty of the musical 1776: It reminds us of what this country stands for, and that we have to take bold action to do the right thing. It also reminds us that the founders of this country were not god or demigods, but men. Fallible men, working out of their own concerns, compromising where necessary for the sake of the country. This is something we forget today.

As you can tell, I liked this production of 1776, even with the shows endemic flaws (the length, and the lack of roles for women). For the most part, under the direction of veteran director and choreographer Nick Degruccio, the production was well conceived and executed. People lived and breathed their roles, and you believed them for who they were pretending to be.

No where was this seen better than in the lead roles: As John Adams of MA, Peter Husmann* gave a very believable and spirited performance. He didn’t quite have the New England flavor of William Daniels (the original Broadway Adams), but he had the requisite internal fire and drive. Further, he was a delight to watch with respect to his facial expressions; this is where his passion really came through. He also had a strong singing voice and was fun to listen to. As Benjamin Franklin of PA, Steve Gunderson* had the necessary rascally side, but was saddled with a really bad Franklin wig. He was strong singing and paired well with Husmann’s Adams. Lastly, as Thomas Jefferson of VA, Dan Callaway* had a wonderful voice and worked well with his Martha, but I didn’t always see the necessary fire.

Three other actors were notable primarily because they got particular songs. For example, as John Dickinson of PA, Michael Andrew Baker* did a lovely job on “Cool Considerate Men”, and in playing the conservative opposition. As Edward Rutledge of SC, Garrett Marshall did a spectacular job on “Molasses to Rum”. Lastly, as Richard Henry Lee of VA, Stephen Bishop was remarkabLEE good :-).

One problem with 1776 is the dearth of female roles. Abigail Adams (Christanna Rowader) has three scenes, all literally walk-ons. Martha Jefferson (Natalie Haro) has one scene and one song. Both were good, but I was particularly impressed with Haro’s performance: she had the spirit, the voice, and the enthusiasm to make the role work. I’m hoping she goes far in this industry.

Turning to the technical side: The sound direction by Jonathan Burke (FB) was crisp as always. The lighting by Christina L. Munich was effective as usual; I particularly noted the different colors used behind the Continental Congress set. Wardrobe was supervised by Christine Gibson and was reasonably effective, although some costumes (provided by Musical Theatre West) seemed a little large.  The set and props, also by Musical Theatre West, worked well. Hair and Makeup were by Mark Travis Hoyer, and proved the only weakness in the production — in  particular, the wig for Benjamin Franklin was just wrong. Tim Schroepfer (FB) was the technical director. Allie Roy* (FB) was the production stage manager, assisted by Jessica Standifer. Cabrillo Music Theatre is under the artistic direction of Lewis Wilkenfeld.

This afternoon’s show was the final performance of 1776. However, you can still subscribe to the rest of the Cabrillo season: “You’re a Good Man Charlie Brown“, “Grease”, and “Legally Blond: The Musical“.

Upcoming Theatre and Concerts:  November is much lighter in terms of theatre. At the beginning of the month, my wife will be going to VPAC to see Ballet Folklorico (but you probably won’t see a review here), but there is no other theatre planned. The following weekend won’t be available for theatre, as we’ll be out working at “Day Out with Thomas” at OERM. The next weekend sees us at VPAC for a concert performance of Raul Esparza. November will close with “Moonlight and Magnolias” at REP East. December sees us at the Colony for “The Morini Strand” on 12/15 (if it happens; the Colony is having major financial trouble). December will also likely bring “Anything Goes” at the Ahmanson. It will also bring another concert: “Judy Collins” at VPAC. Starting the look into 2013. Currently nothing is scheduled for January, but that’s sure to change as REP announces its dates for the 2013 season. February brings “You’re a Good Man, Charlie Brown” at Cabrillo Music Theatre and “I’ll Be Back Before Midnight” at the Colony. It may also bring “Backbeat” at the Ahmanson. March will likely bring “Catch Me If You Can” at Broadway LA/Pantages. I’m also keeping my eyes open as the various theatres start making their 2013 season announcements. Lastly, what few dates we do have open may be filled by productions I see on Goldstar, LA Stage Tix, Plays411, or discussed in the various LA Stage Blogs I read (I particularly recommend Musicals in LA and LA Stage Times).