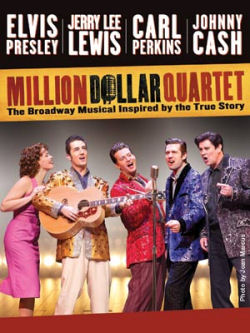 Last night, I went to a rockin’ jam session at one of the oddest of places: The Pantages Theatre. Perhaps I should explain. On Tuesday December 4, 1956 in the Sun Record Studios in Memphis, Tennessee there was an impromptu jam session between Elvis Presley, Jerry Lee Lewis, Carl Perkins, and Johnny Cash. This meeting was preserved only by a photograph and a session tape made by the owner of Sun Records, Sam Phillips. A few years ago, this session was turned into a Broadway musical, called “Million Dollar Quartet“, built around a fictional account of that session. Really, the show was just an excuse to bring together classics from the four artists in a jukebox musical, with the conceit that the actors were actually playing the instruments as well as singing. So this was the “jam session” I was at last night: “Million Dollar Quartet” at the Pantages–a rockin’ session with Elvis, Cash, Perkins, and Jerry Lee Lewis. It was great.

At this point, I would normally synopsize the plot. But let’s start instead with the real history, summarized by Sun Records: According to Sun, the jam session seems to have happened by pure chance. Perkins, who by this time had already met success with “Blue Suede Shoes,” had come into the studios that day, accompanied by his brothers Clayton and Jay and by drummer W.S. Holland, their aim being to cut some new material, including a revamped version of an old blues song, “Matchbox.” Sam Phillips, the owner of Sun Records, had brought in his latest acquisition, singer and piano man extraordinaire, Jerry Lee Lewis, still unknown outside Memphis, to play the piano on the Perkins session.Sometime in the early afternoon, Elvis Presley, a former Sun artist himself, but now at RCA, dropped in to pay a casual visit accompanied by a girlfriend, Marilyn Evans. He was, at the time, the biggest name in show business. After chatting with Philips in the control room, Presley listened to the playback of the Perkins’ session, which he pronounced to be good. Then he went into the studio and some time later the jam session began. Phillips left the tapes running in order to “capture the moment” as a souvenir and for posterity. At some point during the session, Sun artist Johnny Cash, who had also enjoyed a few hits on the country charts, popped in (Cash claimed he was the first to arrive at Sun Studio that day). The event was captured by well known photograph of Elvis Presley seated at the piano surrounded by Jerry Lee Lewis, Carl Perkins and Johnny Cash. The session tapes have been released on CD.

That’s what we know happened. Around this story a musical was constructed. The basic plot elements added by book writers Colin Escott and Floyd Mutrux revolved around the following: (1) At the end of 1955, Phillips sold Presley’s contract to RCA to prevent Sun Records from going bankrupt; now RCA wanted to buy Phillips and the studio to get someone who knew how to work with Elvis; (2) Cash had been increasingly absent from the studio, and Phillips wanted to lure him back by presenting him with a 3-year contract; (3) the tension between Perkins, who had written “Blue Suede Shoes”, and Elvis, who made it a hit on the Ed Sullivan Show, and (4) Perkins, who was trying to find his next hit, and the just-hired Jerry Lee Lewis, a brash young upstart trying to prove himself. The songs chosen were some (but not all) of the ones from the original session, plus a number of well-known hits that may have come a little later. This isn’t a true story.

This also isn’t an impersonator show. You want that, go to Vegas. The actors in this show have hints of the mannerisms of the original artists, but are not going for exact impersonations or impressions. They have hits of the vocal quality. What they do have is the musical skills, which combined with the hints makes you see them as the artists.  This is the contribution of the original concept and direction by Floyd Mutrix (who also did the recent “Baby It’s You” that we saw when it was at the Pasadena Playhouse), and the show direction by Eric Schaeffer (assisted by David Ruttura; tour direction was by The Booking Group).

That said, what makes this show are the artists. I was most impressed with Martin Kaye as Jerry Lee Lewis: Kaye was just great on the piano and in his performance, and he just won me over. Kaye is from the UK, and I look forward to learning more about this artist. As Perkins,  Lee Ferris played a mean electric guitar. It was also fun to watch his interactions with Kaye’s Lewis. Ferris left Freddy and Francine to join on this tour. There was a nice interview with him recently in the LA Stage Times. As Johnny Cash, Derek Keeling didn’t particularly look like Cash (he looked more like Elvis), but had the guitar, and more importantly, the voice, deep down pat. We have seen Keeling before, most recently in “Happy Days: The Musical” at Cabrillo. Lastly, as Elvis, Cody Slaughter had the voice, personality, and swagger down pat. This shouldn’t be a surprise, as he was named the Ultimate Elvis Tribute Artist of 2011.

Supporting these four artists were Christopher Ryan Grant as Sam Phillips. Grant’s Phillips provided the narrative glue for the story (such as it was), and did a good job of being his character. Kelly Lamont‘s Dyanne was the book writer’s attempt to capture the unknown girlfriend of the picture. We don’t learn anything about her character–she is mostly eye-candy… but this story does allow her to sing and participate in a song or two, and she’s having great fun doing that. Rounding out the musicians were Billy Shaffer as Fluke the drummer (the character corresponding to W.S. Holland) and Chuck Zayas as Jay Perkins, on bass.

One note about the cast: They were having fun. I think that’s what turned this from a “show” into a “jam sessions”. These musicians were just having fun playing with each other, and this infectious joy of playing and having fun with the music came across from the stage, and had the audience standing and dancing and just rocking out. This was something you didn’t see in shows like “Rock of Ages”: they were shows. This was a fun jam session, and it had the magic to make you feel like you were there. This is something you’ll never get from a projection onto a screen.

Rounding out the technical and creative team:  Music arrangements and supervision were by Chuck Mead, with additional arrangements by the original Broadway “Jerry Lee Lewis”, Levi Kreis (who it appears will be at the NoHo Arts Center in mid-July). August Eriksmoen was the associate music supervisor. Sound design was by Kai Harada and was great (and remember, this was the Pantages, so Harada is one of those folks who knows how to get it right). You really believed that the 1950s-era mics were live. Lighting was by Howell Binkley and was effective at creating the mood. The scenic design was by Derek McLane and consisted primarily of the Sun Studio, which looked appropriately period. The costumes by Jane Greenwood were appropriately period; they were supported by the hair and wig design by Tom Watson. These provided the additional hints that created the characters. David Lober was the production stage manager, and Michael Krug was the stage manager.

A Pantages/Broadway LA note: This was the second production we’ve seen at the Pantages that falls into the “perfect” category. They are starting to get things right there, and that is a good thing. I also must thank the audience services team, who were able to rearrange our seats to get Karen a seat where her shoulder wouldn’t be jostled. Guessing at who to tank, I’ll thank Steve Cisneros, the House Manager, as the leader of the team. That’s going above and beyond, and that’s a good thing. You still can’t get discount tickets over the phone (Ticketmaster and their $9/ticket surcharge), but going to the box office works well to get $25-$35 seats that are reasonably good, even if they are on the sides.

“Million Dollar Quartet” continues at the Pantages through July 1. The show was relatively empty: You should be able to go to the box office and get reasonably-priced tickets in seating area “E” ($25-$30). You could also buy online if you don’t mind the surcharge. The show is worth seeing.

Upcoming Theatre and Concerts: I should probably redo this, as I’ve just been cutting and pasting. Normally, next weekend (June 30) we would be going to the Western Corps Connection in Riverside, but is too much for Karen. Instead, we’re going to “Geeks, The Musical” in Hollywood (Goldstar). July formally starts with “The Savannah Disputation” at The Colony Theatre on July 7. July 14 brings “The Laramie Project” at REP East. The third weekend in July is open–that’s my wife’s birthday weekend, so it’s up to her where we are going. The last weekend in July brings “Meet Me In St. Louis” at Cabrillo Music Theatre. August has a bit less, as we’re going to have some vacation days and will be taking Erin to start UC Berkeley. We’ve only got one show scheduled: “Play Dates” at REP East. As an aside: we will be vacationing in Palm Springs, so if anyone knows of live theatre going on there in August, let me know. September activity resumes, beginning with “Blame It On Beckett” at the Colony Theatre on September 1 and “Sherlock Holmes: The Final Adventure” at REP East on September 29. I”m also looking into “Silence: The Musical” at the Hayworth Theatre, which starts September 8 and runs through December, and “Xanadu” at DOMA, which starts September 7 and runs for about 3 weeks. October brings some travelling for family: the Cal Parents Weekend at UCB, and the bat-mitzvah of a cousin in Fresno. It will also bring “American Fiesta” at the Colony Theatre, and “The Book of Mormon” at Broadway LA/The Pantages. Continuing the look ahead: November may bring “Seminar” at The Ahmanson Theatre (still undecided on ticketing), and will bring “Moonlight and Magnolias” at REP East. It will also bring “Day Out with Thomas” at OERM (certainly on some or all of Veterans Day weekend – November 10-11-12). November  may also see us at VPAC for Raul Esparza, especially if Erin flies in for it (he’s singing on her birthday). Lastly, to close out the year, December has nothing formally scheduled (other than ACSAC), but will likely bring “Anything Goes” at the Ahmanson, and may bring “Judy Collins” at VPAC.Lastly, what few dates we do have open may be filled by productions I see on Goldstar, LA Stage Tix, or discussed in the various LA Stage Blogs I read.