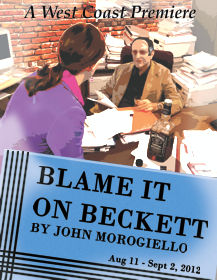 Dramaturgy. Most of us haven’t even heard the word, let alone do we know what a dramaturg does? Now imagine a play about a dramaturg. You would expect it to be boring, right? Wrong. How do we know this? Last night, we were at the Colony Theatre in Burbank seeing an incredibly funny backstage comedy about a dramaturg, “Blame It on Beckett“. (I”ll note that the Beckett in the title refers not to the play Becket or the Honor of God by Jean Anouilh, but the problems in the theatre created by Samuel Beckett and his play Waiting for Godot)

So what does a dramaturg do? According to Wikipedia, “A dramaturge or dramaturg is a professional position within a theatre or opera company that deals mainly with research and development of plays or operas.” It expands on this, noting “One of the dramaturg’s contributions is to categorize and discuss the various types and kinds of plays or operas, their interconnectedness and their styles. The responsibilities of dramaturg vary from one theatre or opera company to the next. They might include the hiring of actors, the development of a season of plays or operas with a sense of coherence among them, assistance with and editing of new plays or operas by resident or guest playwrights or composers/librettists, the creation of programs or accompanying educational services, helping the director with rehearsals, and serving as elucidator of history or spokesperson for deceased or otherwise absent playwrights or composers. At larger theaters or opera houses, the dramaturg works on the historical and cultural research into the play or opera and its setting. In theater companies, a dramaturg will create a workbook for the director and actors (usually these are different) and work extensively with the director prior to the first rehearsal.”

In “Blame It On Becket“, the story revolves around Jim Foley, a dramaturg at a small theatre company whose mission is to originate new works. Heidi Bishop is a recently graduated MFG desiring a career in dramaturg, but currently working in the box office. She convinces Jim to take her on as a reader for free, and then works the general manager, Mike Brasci, into a part-time intern position. Jim’s responsibilities primarily involve reading through the submission pile to determine what plays the theatre will produce; he also has the responsibility to shape the selected new play for presentation. The play this year is the latest from the noted playwright Tina Fike, who has worked with Jim for years. The general manager is hoping that this play will move to Broadway, both because the theatre needs the money, and because he wants to move with it and get out of the small theatre world.

You can see the various situations this sets up. To put it in dramaturgical terms, for each character you can see both the character’s goals and the obstacles in the way of the goal. This setup also permits the author and the other characters to voice all their frustration with the backstage processes at the theatre, which is hilarious. I can’t remember all the lines, but I do remember the wonderful comparison between theatre and the Catholic church, where the playwright is the author of the Gospels, the director is the priest, the actors are the alter boys fulfilling the work of the priest, and the dramaturg is the prophet shouting against the wind who is usually ignored and martyred. The author takes every opportunity presented to skewer those involved backstage, including himself (who is dismissed by the dramaturg character as a hack playwright!). He also made a comment, which I agree with, that no one really understands what the director does. I’ve had that problem as someone who writes up productions: how do I distinguish the work of the director, the work of the actor, and the directions from the author?

This is a relatively unique backstage story, at least that I’ve seen. The ones of which I’m aware are either musicals (think Kiss Me Kate, Juliet and I, and such, which focus on the relationships of the actors) or pure farces (think Noises Off!). This looked at the lives of the other people backstage in a way that I actually learned something. It was also a telling social commentary, dealing with issues of sexual harassment, the hunger for advancement, and the continuing war between productions that are successful financially vs. successful artistically. Although not explicit, it was also a commentary on gays in the theatre and the AIDS epidemic.  But mostly what this was a very funny comedy. Credit for this should go to the writer, John Morogiello, and the unnamed dramaturgs who worked with him on this play. There’s a good summary of the backstage aspects of the play in a recent LA STAGE TIMES article.

The Colony performance of Blame It on Beckett was excellent. Much of this was due to the excellent acting team, including some contribution that I’ve never been able to figure out (:-)) from the director, Andrew Barnicle. The team was led by Louis Lotorto as Jim Foley, the dramaturg. Lotorto’s Foley was pompous and pedantic, never shy to express an opinion. Lortorto pulled off this characterization well, as well as capturing the more human side of Foley as well. Playing off of him was Blythe Auffarth as Heidi Bishop, the green dramaturg-to-be. She captured the strident character well, exposing her sexy side when appropriate but primarily being extensively earnest and effusive about the theatre. Both Auffarth and Lotorto’s performances were delightful to watch: you could see them as people and just wanted to spend more time with them.

Also fun to watch was Brian Ibsen as Mike Braschi, the general manager. Ibsen did a wonderful job of capturing the ambitious side of Braschi, and I especially appreciated his playful smile and his light banter. Rounding out the cast was Peggy Goss as Tina Fike, the playwright. This character was more foil, but acquired some depth in Act II.
[Note: All actors are members of Actors Equity.]

The scenic design by Stephen Gifford, combined with the props by MacAndME, captured the overworked office well. From the Steel Case desks to the stacks of scripts everywhere (with hilarious titles such as “Whodunit? The Musical” — I wonder if they were real) — it was just great. This was augmented by Kate Bergh‘s great costume design, which captured not only the elbow-patched dramaturg well, but the young college graduate, the business executive, and the rumpled playwright. Drew Dalzell‘s sound design provided appropriate sound effects and voiceovers, and the lighting by Paulie Jenkins and Ilya Mindlin was unobtrusive and established the scene wele. The production was stage managed by Ricky Moreno.

“Blame It On Beckett” has one more performance, today at 2pm. Tickets are available at the Colony Box Office online or by calling (818) 558-7000 x15. Next weekend, the Colony is hosting a special performance by Jane Kean, who has a long history on stage and screen, including playing Trixie in the Honeymooners. Although it wasn’t mentioned in the handout they gave us, I remember her from the musical Ankles Aweigh, which was a noted failure in the 1950s. Again, tickets are available through the Colony Box Office.

Upcoming Theatre and Concerts: Next weekend sees me in the Westlake District for “Silence: The Musical” at the Hayworth Theatre. This is a musical version of Silence of the Lambs, and is supposedly quite funny. The following weekend brings “Xanadu–The Musical” at DOMA; I’ve heard the music, and again this is a great parody. The penultimate weekend in September takes us to the Celebration Theatre in Hollywood for the musical Justin Love. The month ends with  “Sherlock Holmes: The Final Adventure” at REP East on September 29. October brings some traveling for family with the bat-mitzvah of a cousin in Fresno, and Karen will be travelling for the Pacific International Quilt Festival in Santa Clara.   Still, what’s a month without theatre, so… October will start out with “The Fantasticks“ at Theatre West on 10/6. That will be followed by “American Fiesta” at the Colony Theatre on 10/13, “The Book of Mormon” at Broadway LA/The Pantages on 10/27, and “1776” at Cabrillo Music Theatre on 10/28. Continuing the look ahead: November will bring “Moonlight and Magnolias” at REP East, which is booked for the end of the month. It may also bring “Seminar” at The Ahmanson Theatre (still undecided on ticketing) and may bring a concert performance of Raul Esparza at VPAC, especially if Erin flies in for it (he’s singing on her birthday). Non-theatrically, it will also bring “Day Out with Thomas” at OERM (certainly on some or all of Veterans Day weekend – November 10-11). Lastly, to close out the year, December has nothing formally scheduled (other than ACSAC), but will likely bring “Anything Goes” at the Ahmanson, and may bring “Judy Collins” at VPAC. Lastly, what few dates we do have open may be filled by productions I see on Goldstar, LA Stage Tix, Plays411, or discussed in the various LA Stage Blogs I read (I particularly recommend Musicals in LA and LA Stage Times).

One Reply to “So What Is A Dramaturg Anyway, and Why Are They Funny”