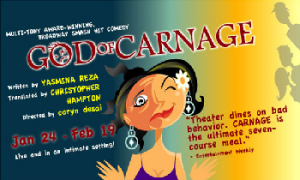 Last spring, the New York cast of “God of Carnage” visited the Ahmanson Theatre. I wanted to see the show, but the discount tickets were extremely limited and difficult to get, and it passed me by. Luckily, International City Theatre in Long Beach selected the show to open their 2012 season, and we decided to skip the Super Bowl and go see it instead. For us, the story is the key, not particular names in the cast; in fact, we were happy to see a production where we’ve seen three of the four actors on Southern California stages.

This was our second Yasmina Reza play in a row (last week was “Art” at the Pasadena Playhouse), and both had to deal with adults behaving like children. Last week, it was three men obstensibly arguing about a friend’s taste in art, whereas the real hurt was something much much deeper. Similarly, in “God of Carnage“, the surface argument is not what the real fight is about. (I’ll also note that both plays are 90-minute, one-act plays).

“God of Carnage” tells the story of two parental couples who are brought together because their pre-teen children had a schoolyard brawl–specifically, Benjamin Raleigh had used a stick to hit Henry Novak and knock out two of his teeth (injuring the nerve of one of them) [later we learn this occurred because  Henry refused to let Benjamin join his “gang” and called him names]. That evening, the parents of Henry (Veronica and Michael Novak) invite Benjamin’s parents (Annette and Alan Raleigh) over to discuss the matter, and to get their son to apologize personally to Henry. As the evening goes on, the parents civil discussion becomes significantly less civilized (especially after Annette vomits over the coffee table), and the veneer that we parents wear becomes ripped off. I could probably describe more, but as with “Art”, it is really best to watch and see the gory details as these to parents become children and brawl in the fancy living room.

The production we attended had a talkback, and I asked how much came from the director and how much from the actors. Both noted they couldn’t be separated, giving the example of how after you have baked a cake, you can no longer separate the constituent ingredients. So I won’t attempt to do so; I’ll simply indicate that this is a delightful cake, indicating the skill of both the cook and the quality of the ingredients.

In this case, the cook is the director, caryn desai, who is also the artistic director of ICT. The ingredients are Greg Derelian and Leslie Stevens as Michael and Veronica Novak, and David Nevell and Alet Taylor as Alan and Annette Raleigh. The cake is so thoroughly sweet that you can’t even separate the actors: all of them are great, and all of them give wonderful performances. As I indicated, we have seen most of them before: we saw Leslie  and David at the Pasadena Playhouse, and Alet at Cabrillo and the NoHo Arts Center (I’ll also note that all are members of

Turning to the technical side. The set was designed by Stephen Gifford, who has done numerous productions at both ICT and the Colony, and did a very elegant New York apartment set. Lighting was by Jeremy Pivnick, and was very simple. Sound was by Chris Kittrell, and was reasonably good (my only complaint was that the cellphone sound effect didn’t come from the cellphone). Kim DeShazo was the resident costume designer; Gordon and Patty Briles were the resident property designers, and Michael Donovan was the resident casting director. Pat Loeb was the Production Stage Manager.

“God of Carnage” continues at ICT through February 19. Tickets are available through the ICT online box office.

Upcoming Theatre, Concerts, and Dance: Next weekend sees us in Thousand Oaks for “Ring of Fire” at Cabrillo Music Theatre on February 11. The third weekend of February has two shows: Saturday night we’re in Saugus for “Jewtopia” at REP East; the following afternoon we’re in Sierra Madre for “On The Twentieth Century” at the Sierra Madre Playhouse. February concludes with “Old Wicked Songs” at the Colony Theatre. March is equally busy, beginning with “How to Succeed in Business without Really Trying” at Van Nuys High School (March 2-3 and 8-10; we’re likely going on 3/2), and Bernadette Peters in concert at the Valley Performing Arts Center on March 3. March should also bring “American Idiot” at the Ahmanson, and “Journey’s End” at REP East. March will conclude with Tom Paxton in concert at McCabes on 3/31. Continuing the look ahead, April will bring “Billy Elliot” at the Pantages, the Southern California Renaissance Faire, “Once Upon a Mattress” at Cabrillo, and “Dames at Sea” at the Colony. As always, open dates are subject to be filled in with productions that have yet to appear on the RADAR of Goldstar or LA Stage Alliance.

Music: Time to Think (Kingston Trio): Song for a Friend

One Reply to “And They Say Parents are Civilized. Hah!”