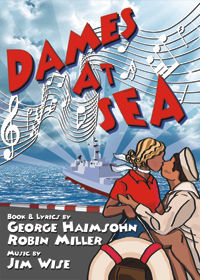 Some musicals you go to for their deep social content–an example might be “Kiss of the Spider Woman“. Others have a great or familiar story–take “Annie” or even last week’s “Once Upon a Mattress“. Some are simply jukebox musicals. Then there are those that are completely silly fluff — and they know it. Last night’s show, “Dames at Sea” falls clearly in the fluff category. The authors knew it, the set designers knew it, the actors knew it… and the audience learnd it when this fun piece of fluff was performed last night on the stage at the Colony Theatre in Burbank.

Those those unfamiliar with “Dames at Sea“, it is a musical written in the 1960s with book and lyrics by George Haimsohn and Robin Miller and music by Jim Wise. It was intended from the get-go as a parody of the “Golddiggers” movies of the 1930s and the style of Busby Berkeley. It was intially produced off-Broadway in 1968, and featured newcomer Bernadette Peters as Ruby, the fresh-off-the-bus newcomer to Broadway who becomes a star.

Plot? You want to know the plot? There isn’t any. Well, to be serious, it really doesn’t matter, does it? As the show opens, we see… opening credits. Seriously, the name of the show is introduced, along with each of the actors. As I said, this is a parody of movie musicals. As the show really opens, it is the early 1930s. We’re on Broadway, where a Broadway musical is in rehearsal. The temperamental star, Mona Kent, is doing a number with two dancing skyscrapers who keep trying to upstage her. In short order, we meet Hennesy, the producer/manager/director, and Joan, the seen-all, knows-all chorus girl. The naive Ruby arrives from Utah determined to be a Broadway star. She gets into the show, but then realizes she left her suitcase at the bus depot. In busts Dick with the suitcase. Ruby and Dick fall in love. Dick is not only a sailor, but an aspiring song-writer. The rest of the first act consists of Dick introducing his songs, the star Mona Kent falling for Dick’s songs, Ruby mistaking that for Mona falling for Dick, and Dick’s friend, Lucky, reigniting his relationship with Joan. As that act ends, however, the show can’t go on because the theatre was being torn down for a WPA project roller-rink. But Dick has an idea! They can do the show, which is titled “Dames at Sea” on the battleship. Thus, the second act. In the second act, Dick and Lucky persuade their Captain to volunteer the use of their ship. Mona recognizes the Captain as a former boyfriend. Again, we have the romance misunderstandings, and as Ruby wants to leave, Dick and Lucky engineering to make Mona seasick. As a result, Ruby steps in to save the show and becomes a star. The three couples decide to marry.

Simple, silly fluff, as I said. Luckily, the Colony saw this. The scenic designer, Stephen Gifford, designed a set that was purposefully hokey, including props that didn’t always work, a simple stage that turned into the battleship, and backdrops that looked like they were purposfully non-realistic. The sparkle and glitz came not from the set (as it does in some major theatres) but from the costumes (designed by A. Jeffrey Schoenberg) and the wonderful performances from the cast. The director, Todd Nielsen, also saw this and emphasized the sillyness and light-heartedness in the performances. The set, costumes, and direction in fact, were such a major part of establishing the tone of this show that I had to talk about them before the cast.

The cast was remarkable. Leading the cast as Ruby, the fresh-off who becomes a star, was Tessa Grady. We’ve seen Tessa many times on the Cabrillo stage (as Joanie in “Happy Days, The Musical” as well as the star-to-be in the recent “Annie“), and she has impressed us each time. She was simply superb–tapping her little heart out, singing up a storm, and exhibiting a naivete that came across perfectly. As Joan, Shanon Mari Mills (another Cabrillo regular, who we also saw in Mask at the Pasadena Playhouse) was also fun to watch. Shanon inhabited the blond wig, and was also a spectacular dancer. Rounding out the female roles was Heather Ayers as Mona, who presented a hard diva nature in addition to wonderful singing and dancing.

Turning to the men, Jeffrey Scott Parsons (yet another Cabrillo regular — we’ve seen him before in “42nd Street” and “Seven Brides for Seven Brothers“) portrayed Dick. Jeffrey had a voice that reminded me of Matthew Broderick, with a similar earnestness and comic timing, as well as great dancing skills. Quite a joy to watch. Dink O’Neal (who was also in “Annie” at Cabrillo) played the dual roles of the Captain and Hennesey. Dink is a great comic actor, with an expressive face and good dancing skills. The one problem I had was not with his performance, but when he was dressed as the Captain, he bore a strking resemblance to a vice-president at work. Very disconcerting. Lastly, as Dick’s shipmate Lucky, Justin Michael Wilcox (who hasn’t been at Cabrillo!) was also a great singer and dancer.

The production was choreographed by Lisa Hopkins, who not only captured the Berkeley style well, but had split-second timing in the movements she obtained from her actors. They would jump, move around, and dance in such a way that if they were just half-a-second off, they would have been in big trouble with their landings. This was amazing, and the show is worth seeing for the movement alone. Music was provided by Colony regular Dean Mora, who was hidden up-top but did stick out a baton to acknowledge the audience.

Sound was by Drew Dalzell and was effective and clear; the sound effects were also spot on. The lighting by Jared A. Sayeg did a good job of creating the mood, although the spot operator appeared to have some trouble keeping up with the actors. Colony regulars MacAndME provided the creative props. Hair and Make-up were by Joni Rudesill. Leesa Freed was the production stage manager.

Upcoming Theatre, Concerts, and Dance: The remainder of May brings the senior dance show at Van Nuys HS, the Spring Railfest at Orange Empire, “The Great American Trailer Park Musical” at REP East, and it may also bring “Follies” at the Ahmanson. Oh, and May also has my daughter’s HS graduation. June is more open, but does feature both “Addams Family” and “Million Dollar Quartet” at the Pantages. July I”ve been keepling light until we know the orientation schedule at UC Berkeley and our vacation schedule. As always, open dates are subject to be filled in with productions that have yet to appear on the RADAR of Goldstar or LA Stage Alliance.

One Reply to “Silly Nonsense”