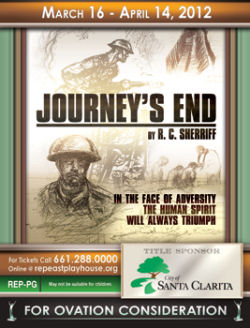 War is Hell. War is also a wonderful microcosm of life: a place to mix drama and comedy, to show how stress can bring out the best in a man, or how the strain can crack a man in half. Perhaps this is why playwrights often turn to a war setting to construct their stories. We’ve seen this many times, from pieces such as “M*A*S*H“, which tempers the absurdity of war with the spice of drama, to numerous World War II and earlier dramas. War dramas are on my mind, as we saw a World War I war drama last night at REP East: “Journey’s End” by R. C. Sherriff.

“Journey’s End” tells the story of four days (18 March 1918 to 21 March 1918) in in the officers’ dugout of a British Army infantry company in the trenches at Saint-Quentin, Aisne towards the end of the World War I. As the story opens, we meet Captain Hardy and Lieutenant Osborne, an older man and public school master, who has come to relieve him. Hardy jokes about the behaviour of Captain Stanhope, who has turned to alcohol in order to cope with the stress which the war has caused him. While Hardy jokes, Osborne defends Stanhope and describes him as “the best company commander we’ve got”. Other characters we rapidly meet are Private Mason, a servant cook, who does what he can with the ingredients he gets; Second Lieutenant Trotter, a rotund soldier who likes his food but cannot stand the war; and Second Lieutenant Hibbert, who is constantly complaining of neuralgia (Capt. Stanhope believes this is so that he can be sent home instead of continuing fighting). We also meet the newest officer: Second Lieutenant Raleigh. Raleigh a young and naive, who knew had a personal friendship with Stanhope from before the war at school. Raleigh requested to be sent to Stanhope’s company, and looks up to Stanhope–a form of hero worship that Stanhope believes he does not deserve. Other characters we meet over the course of the play include the Colonel, who is in charge of the entire operation, and the Sergeant Major, the senior enlisted officer. This set of officers has a duty period of six days at the front, although Stanhope personally refuses to be relieved and has been on the front for much longer.

The story starts out somewhat comedic as we get to know the characters. We see how Raleigh worships Stanhope and doesn’t see the flaws. We see how Stanhope cares for his men and is doing his hardest to appear strong for them in order that they remain strong. We see how Osborne serves as a father figure, providing wisdom and advice to all the men. The first few days are during a quiet period, when the watches are boring and every thing seems to be in a form of stasis. This changes shortly before the end of Act I, where it is learned that the Germans will be doing a major attack on Thursday morning. The British command has decided that they only way they can learn the strength of that attack is to send a raid into the British camp. The various officers are discussed, and ultimately, Capt. Osborne is chosen to lead the raid, with 2Lt. Raleigh selected to actually run in and grab a German soldier and bring him back to the British camp. The second act focuses on the raid itself… its consequences… and the German attack itself. You can read a more detailed synopsis on the Wikipedia page–I don’t want to spoil all the details

The director, Ovington Michael Owston, does a wonderful job of bringing this war to life. We believe that these actors are indeed soldiers, and that we have a window into the real bunker (this is aided by the wonderful technical aspects–more on that later). You can see the exhaustion mixed with the determination to be a good example in Stanhope, the youthful eagerness of Raleigh, the paternal strength of Osborne, the internal fear in Hibbit, the loyalty in the sergeant major, and sense that the Private is not a cook (but not a soldier either), but is doing the best with what he has. In fact, the only minor complaints I have came only after I read the Wikipedia synopsis: preserving the original three act structure (there was an act break after the first scene) would have addressed what seemed to be an overly long first act, and the original end to the second act–if there had been a way to do it in the confines of the REP–would have made the ending even stronger.

The acting in this production was excellent–but we’ve come to expect no less at the REP (* indicates Actors Equity members). In the lead positions were Reid Gormly as Capt. Stanhope, Daniel Lench* as Capt. Stanhope, and Stephen Bailey as 2Lt. Raleigh. Gormly does a great job with Stanhope: you can see the vulnerability behind the strength of the officer; you can understand why he has turned to alcohol (and large amounts thereof) to deal with the stress of leadership. Gormly is proving his versatility as part of the REP team: we saw him previously as the lead, Benjamin Braddock, in the recent production of The Graduate. Lench is already officer material and just grows in his ability to portray leaders both paternal and demented: we’ve seen him as both Col. Blake in M*A*S*H and Ltc. Jessep in A Few Good Men. Bailey is new to the REP, but gives off a wonderful youthful optimism that is a delight to watch. You can see that this fresh-out doesn’t know the horror and the risks of war, and doesn’t understand the risks. This bravery makes the ending of the play even more poignant.

In the supporting positions were Nathan T. Inzerillo as 2Lt. Trotter, Tom Lund as 2Lt. Hibbert, and Kyle Kulish as Private Mason. Kulish was enjoyable to watch in all of his scenes–the dutiful cook who knew nothing about cooking and was doing his best. Lund was particularly good in his scenes with Gormly’s Stanhope, particularly in the scenes where Stanhope helps Lund’s charater, Hibbert, overcome his fear of going back on the line. In tertiary positions were Harry Bennett* as the Colonel and Jeff Hyde as the Sergeant Major. I particularly enjoyed Hyde’s characterization of the Sergeant Major and the little Scottish touches. Rounding out the cast were Michael Levine as Captain Hardy, and Connor Pratt as a German Solider.

This was one show in particular where I noticed the technical touches much more than usual. “O”, in addition to directing, did the set design, and he did a great job of turning the black box of the REP into a dugout in Europe with a wooden substructure, diggings and a general sense of being underground. Steven “Nanook” Burkholder’s sound was even stronger than usual, with a wonderful continuous barrage of snipers and bombs and such that constantly evoked the war. This was echoed by Tim Christianson’s strong lighting which not only gave the foxhole feel, but illustrated the bombs bursting and the ever changing conditions. Rounding this out were the period costumes from Tonya and Rachel Nelson of NSA Costumes. Christina Gonzalez served as Stage Manager and Prop Mistress, and Mikee Schwinn provided art direction. “O” and Mikee also served as the producers.

When one goes to the REP, one learns that the lobby is often an extension of the show. This show was no exception. The staff at the REP turned the lobby into a museum of American military actions since WWI, using materials on loan from cast members and their families, as well as others. It did an excellent job of setting the mood.

“Journey’s End” continues at REP East through April 14. You can get tickets through the REP Online Box Office, and they are often found on Goldstar. The next show in the REP season is “The Great American Trailer Park Musical“, which “contains tacky outfits, bad wigs, crude language, adultery, strippers, road kill, electrocution, and spray cheese”. GATPM runs from May 11 through June 16.

Upcoming Theatre, Concerts, and Dance: March concludes with Tom Paxton in concert at McCabes on 3/31. April will bring “Billy Elliot” at the Pantages, the Southern California Renaissance Faire, “Once Upon a Mattress” at Cabrillo, and “Dames at Sea” at the Colony.  It may also bring the new production of “Working” at The Production Company in Hollywood (haven’t seen the show in years, opens 3/16); the new small-theatre production of “Spring Awakening” by Over The Moon Productions at the Arena Stage (curious to see this in a small production, runs 3/14-4/22); and possibly “The Heiress” at the Pasadena Playhouse (heard it on LA Theatre Works and it sounds good). May will bring “The Great American Trailer Park Musical” at REP East, the senior dance show at Van Nuys HS, and may bring “Follies” at the Ahmanson, and the Spring Railfestival at Orange Empire Railway Museum. It also brings my daughter’s HS graduation. As always, open dates are subject to be filled in with productions that have yet to appear on the RADAR of Goldstar or LA Stage Alliance.

Music: We Shall Overcome (Pete Seeger): Who Killed Norma Jean?

One Reply to “War is Hell… and a Damn Good Drama”