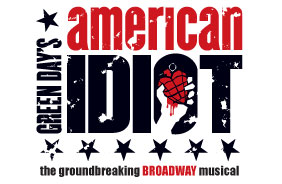 Now we turn to the present, where last night we saw “Green Day’s American Idiot” at the Ahmanson Theatre. This continues the Ahmanson’s trend of aiming for the youth this season: first we had Bring It On, a cheerleader musical; next was Fela!, featuring afropop, and now American Idiot, a musical clearly designed to speak to college-age and just after theatre goers. However, I’m 50+, and familiar with Green Day only from this cast album and their original concept album. What did I think?

It’s a hard question to answer.

On the other hand, it has a rockin’ score. From the minute I heard the opening number, I fell in love with the music of this show. It is energetic, pulsing… yet tender and affecting. Viewed as a simple rock concert, this would be spectacular. But it isn’t. It follows in the vein of shows such as Tommy: a rock album with an overall theme, some aspect of a through story. So this isn’t just a rock concert.

Judging this show requires a number of levels. So let’s talk instead about what was strong, middling, and weak.

Strong was the music and the singers. This music is loud (if you have sensitive ears, I suggest ear plugs), but it is rhythmic and sticks in your brain. Some songs, such as the title song or “21 Guns” are remarkable. Some of the songs are beautiful and tender, although I hesitate to call them ballads. Also strong was the performances. The actors, who I’ll discuss in a few paragraphs, are into their characters. They imbue the songs with stories, creating lyrical performances and dance. Their interpretation, power, and energy are what makes this show.

Middling is the story itself. If I had to summarize the book to you, I could do so only in short words and phrases. Alienation. Anti-war. Love. Perils of war. Perils of drugs. Perils of relationships. Finding yourself. I’d be hard-pressed to name specific characters. I’ve pieced together what the rough story is not from my watching of the show but from reviews of the show, such as the one in the LA Times. My short words described the story best: alienation. The story centers on three slacker college students: Johnny, Will, and Tunny. Trying to find themselves, Johnny and Tunny move to the city; Will can’t, as his girlfriend is pregnant. In the city, Johnny and Tunny try to find themselves. Instead, Tunny finds the army, Iraq, and the eventual consequences. Johnny finds a girl (Whatshername) and heroin and St. Jimmy. The three are eventually reunited. That is as detailed a story as I can piece together.

As I said, light story. But there are some touching and wonderful moments theirin. For example, the number “Extraordinary Girl” is presented in a military recovery ward as an aerial ballet between Tunny and the Extraordinary Girl, and is truly remarkable. The number “Give Me Novacaine” demonstrates through movement and performance Jimmy and Whatsername’s slide into drugs. Other numbers that stick in the head (I’m not sure if it is the performance or the music) include “Are We the Waiting”, “21 Guns”, and “Wake Me Up When September Ends”.  I particuarly love the title number and its staging, rage, and choreography.

Poor was some aspects of the stagecraft. We were seated in the limited view seats on the edge of the 6th row. We could see clearly into the wings where there was a large bunch of sound equipment, and people constantly coming over and fiddling with it. This was distracting. Other theatres know well that the illusion must be preserved wherever you sit in the auditorium. To the Ahmanson: get a curtain.

WIll you like the show? That’s hard to answer. Last night, we saw an elderly couple get out of their seats during the second number and leave. The music–both in tone and volume–isn’t for everyone. There is use of drugs, simulated sex, strong language and gestures, and revealing costumes. But if you can get past that, there is wonderful music (from a genre I never expected to like), touching performances, strong dance, and loads and loads of energy. So what if the story is weak. The performance and music make up for it.

As I indicated above, the performances were wonderful. Alas, it was hard to distinguish particular characters from each other. Further, members of the ensemble take on various characters throughout the story. All gave wonderful performances. In the lead positions were Van Hughes as Johnny, Joshua Kobak [note: Kobak’s personal site has a Google malware warning] at St. Jimmy, Scott J. Campbell at Tunny, and Jake Epstein as Will. We see the most of Van Hughes as Johnny and Kobak as Jimmy. Van Hughes performance is wonderful: his singing is great, and you can just feel his anguish. Campbell’s peformance is great as well, especially in the aforementioned “Extraordinary Girl”, “Are We The Waiting”, and “When September Ends”.

In the second tier (with respect to billing and role size), we have Gabrielle McClinton at Whatsername, Nicci Claspell as The Extraordinary Girl, and Leslie McDonel as Heather. McClinton is a remarkable performer, as is demonstrated in her interactions with Van Nughes’s Johnny. You can see the sorrow on her face when Johnny pulls out the heroin; you can see her love for the man-boy; you can see her rage when he leaves her. Claspell has a smaller role — primarily in the aforementioned ballet with Campbell’s Tunny. McDonel’s Heather plays the pregnant girlfirend of Will, and does a good job of conveying someone excited about being a mother, but fed up by the slacker father. She has no speaking lines: her role is solely through performance and song.

Direction was by Michael Mayer, with choreography by Steven Hoggett and Musical Supervision by Tom Kitt. Jared Stein was the music director and conductor of an on-stage band consisting of Jason Bozzi (guitar), Julian Peterson (guitar), Dan Grennes (bass), Alon Bisk (cello), and Grant Braddock  (drums). Lorin Latarro was the associate choreographer, and Johanna McKeon was the associate director.

Turning to the technical. Christine Jones‘ scenic design shortens the Ahmanson stage, creating a half-depth space filled from floor to ceiling with video screens and debris. It works, although it is hard to take in all the images on the screen. Darrel Maloney‘s videos and projections are a critical part of the scenic design (as previously noted), establishing the context for the alienation. Andrea Lauer‘s costumes reflect the period well (if less-than 10 years ago can be called a period); some of them are quite astounding.  The lighting by Kevin Adams is effective and creates the mood well–he uses movers and LED lights to create a constantly changing hue. Brian Ronan‘s sound design deals with the volume well, although the actors must go through a lot of microphones! Technical Theatre Solutions LLC provided technical supervision; I was particularly amazed with how they handled Tunny’s leg. Monica Dickhens was the Production Stage Manger; A. J. Sullivan was Stage Manager, and Michael Rico Cohen was the Assistant Stage Manager.

“American Idiot” continues at the Ahmanson Theatre through April 22. Next up: “Follies“.

Upcoming Theatre, Concerts, and Dance: Tonight we’re seeing a very different show: “Journey’s End” at REP East. March will conclude with Tom Paxton in concert at McCabes on 3/31. April will bring “Billy Elliot” at the Pantages, the Southern California Renaissance Faire, “Once Upon a Mattress” at Cabrillo, and “Dames at Sea” at the Colony.  It may also bring the new production of “Working” at The Production Company in Hollywood (haven’t seen the show in years, opens 3/16); the new small-theatre production of “Spring Awakening” by Over The Moon Productions at the Arena Stage (curious to see this in a small production, runs 3/14-4/22); and possibly “The Heiress” at the Pasadena Playhouse (heard it on LA Theatre Works and it sounds good). May will bring “The Great American Trailer Park Musical” at REP East, the senior dance show at Van Nuys HS, and may bring “Follies” at the Ahmanson, and the Spring Railfestival at Orange Empire Railway Museum. It also brings my daughter’s HS graduation. As always, open dates are subject to be filled in with productions that have yet to appear on the RADAR of Goldstar or LA Stage Alliance.