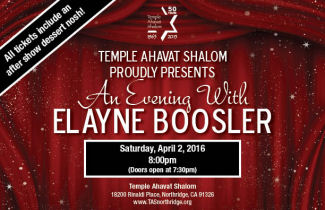 Last night, Temple Ahavat Shalom (FB) threw a special fund raiser in honor of the 50th Anniversary of the formation of TAS as TAS out of the merger of two other congregations (Temple Beth Torah (1951-2016) and North Valley Reform (1962-1965)). For this fund raiser, TAS presented comedienne Elayne Boosler (FB).

When this was first announced, I was excited. As you’ve probably figured out, I attend loads of live performances every year, and I write up each and every one of them. Yes, that obsession extends to Temple events. So, last year, when we held a cantor’s concert, I felt obliged to write that up. It’s OK when things are good, but when they go south, well, it can be a bit awkward.

So, when I heard about Ms. Boosler coming, I was very happy. I could write up the show without worrying about feelings. Further, she was someone I had heard about, and about whom I had heard positive things. My wife, who isn’t always enamored of Temple events, didn’t even put up a fuss with the tickets.

So, last night came. And we were blown out of the water. The evening was extremely funny — I can’t think of the last time I’ve seen my wife laugh like that; it certainly topped both Gentleman’s Guide to Love and Murder and An Act of God. There were some stories that I’m not sure I ever expected to hear from a bimah, but they were true and effective commentaries on life — which is what we get normally from a bimah. Evidently, a lot of the material was part of her regular act (which I hadn’t). I can’t remember a lot of the stories, but I did enjoy the reference contrasting Donald Trump with a Jackie Mason delivery.

During the show, Elayne mentioned her charity Tails of Joy, which does dog and cat rescue and supports such organizations. This made us think of our dear friend Mindy, who works with Boxer Rescue LA.  Mindy would have gotten a kick out of the show.

All, in all, a very enjoyable evening, with wonderful desserts. Congratulations to the 50th Anniversary Committee at TAS for doing this event; I hope an evening like this become an annual tradition. It’s something we’ll certainly go to.

Disclaimer: I must disclose that I am President of the Men of Temple Ahavat Shalom; as such, I am also a member of the Board of Trustees.

Upcoming Shows: Next up is a mid-week concert of the Turtle Quintet at the Valley Performing Arts Center (VPAC) (FB) on April 7, followed by “Children of Eden” at Cabrillo Music Theatre (FB) on April 10. The following weekend’s theatre is on Thursday, because the weekend brings our annual visit to the Renaissance Faire (Southern). The Thursday show is Stella’s Last J-Date at the Whitefire Theatre (FB). The fourth weekend in April is is Pesach, but the Indie Chi Productions dark comedy Dinner at Home Between Deaths at the Odyssey Theatre (FB) sounded so interesting I’ve booked Sunday tickets. The last weekend of April will be the Four Clowns (FB) production of Lunatics and Actors at the LA Shakespeare Center on April 30. May starts with a hold date for Endgame at the Kirk Douglas Theatre (FB). We then run off to the Bay Area for our daughter’s graduation from Berkeley. While there, we are seeing the Landmark Musical Theatre (FB)’s West Coast Regional Premiere of The Boy from Oz (but pay no attention to that production behind the curtain — if they start the same day, they are simultaneous premieres and both have equal bragging rights). May 21 has a hold for Los Angeles: Then and Now, a new musical at LA City College (FB) from Bruce Kimmel. The last weekend of May has holds for the MoTAS Outing to the Jethawks, and Armadillo Necktie at The Group Rep (FB). As for June? It’s the Hollywood Fringe Festival (FB), and I’ve started to hold dates for the following shows: All Aboard the Marriage Hearse ✨ All The Best Killers are Librarians ✨ Qaddafi’s Cook — Living in Hell, Cooking for the Devil ✨ Squeeze My Cans ✨Tell Me On A Sunday  ✨ Toxic Avenger: The Musical  ✨  Vintage Box ✨ Einstein ✨Titus Andronicus Jr. ✨The Old Woman ✨Sweet Love Adieu ✨ My Big Fat Blond Musical✨Alien vs. Musical ✨ Hamlet (Las Vegas Style) ✨. But that’s just a small percentage; there are over 200 shows listed now.  We thought about Love The Body Positive, but then again… no. Can’t be scaring people.  As always, I’m keeping my eyes open for interesting productions mentioned on sites such as Bitter-Lemons, and Musicals in LA, as well as productions I see on Goldstar, LA Stage Tix, Plays411 or that are sent to me by publicists or the venues themselves.

Today’s news chum brings together a collection of stories related by… well, they all struck me as having some connection with a theme park or similar attraction:

Lastly, to continue yesterday’s post about the joke’s just writing themselves… Yesterday, I cited an article with the headline “Why Did The Chicken Lose Its Penis?” because the responses that came from the headline just seemed to write themselves. If you went to the link, the comments gave a lot of them (such as “Because its pecker is on the other end”). Here are three more headlines that caught my eye:

I expect to see most of these showing up on “Wait Wait” in the coming weeks.

I love stories like this: “Man charged with bigamy after two wives find each other on Facebook”

Bigamists beware: Thanks to Facebook, keeping your wives from finding out about each other is almost impossible these days.

Corrections officer, and alleged bigamist, Alan L. O’Neill learned that lesson the hard way when Facebook suggested his two wives “friend” each other — leading wife No.1 to discover a picture of her husband and his second wife standing in front of a wedding cake, the Associated Press reports.

Now O’Neill is facing bigamy charges in a Pierce County court in Washington state. If convicted he faces up to a year in jail.

An anonymous little birdie has let me know of a proposal that contains a truly honest Privacy Policy. Do you think I should adopt this for cahighways.org?

END_OF_DOCUMENT_TOKEN_TO_BE_REPLACED

Damn. Why can’t Earthlink implement this.

That reminds me…. I need to call Time Warner to explore a cable modem. From what I understand, they’ve implemented this 🙂

I just received an email from Rep East Playhouse announcing that their current production, “Dr. Jekyll and Mr. Hyde” (which we’re seeing Saturday night) has only 5 performances left (tickets). Specifically, it said: “IT’S TERRIFYING… that you may miss this show! Just 5 Performances Left & it will not hold over”

Is the kerfluffle over LJ and FB getting you down? Perhaps you need some motivation (FB users: do click through to see the image fullsize):