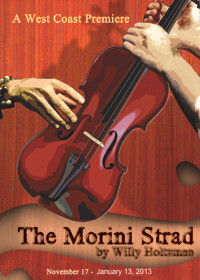 Imagine reading the paper and coming across the following theft report:

“The ‘Davidov’ Stradivari violin, owned by Erica Morini, was stolen just before her death from her Manhattan home. However, it seems that this was no break-in by casual looters, but a planned theft by a small circle of those who had access to the apartment and to the key of the wardrobe in which she kept the instrument. When a friend went to check on the violin, all she found was an empty case, with no trace of forced entry or exit to the flat. Last valued at $3.5m/£2.2m, the ‘Davidov’ may well provide a lucrative private deal for the thief. But any new owner will have to keep it well hidden from violin experts for many years if they wish to remain anonymous.
(“Morini’s ‘Davidov’ Strad vanishes”, The Strad, January, 1996, quoted on Cozio.Com)

Would this report about a real violin that is now on the FBI’s Top Ten Art Crimes List strike you as an interesting subject for a play? It struck Willy Holtzman that way, and we saw his resulting play, “The Morini Strad“, last night at The Colony Theatre in Burbank.

The Morini Strad tells the story of Erica Morini and her relationship with Brian Skarstad, a luithier who Morini hires to repair her Stradivarius after it is damaged due to a slip of the bow. It portrays the relationship of these two from the point of hire to the point of Morini’s death. Although it changes a few details for the point of storytelling, it essentially shows how a deep friendship developed between these two: the crusty artist and the affable artisan. In doing this, the story becomes less a story about the Strad and more a story about the people. It serves to raise questions about the price an artist pays for the pure devotion to their art, and how much the work of an artist is due to the craftsmanship and talent of the artisan who makes their instruments. Lastly, it also raises the question of whether over-inflating the quality of the instrument  over the quality of the artist is appropriate, for Skarstad supposedly makes instruments of equal if not better sound than Strad (and I was just listening to a recent Freakonomics that made the point that an artist should not blame lack of creative quality on their tools; remarkable creativity can be done with the poorest of tools).

What did I think of the story? At the end of the play, my reaction was neither “wow!” nor “whimper“. I thought the story of the violin itself was interesting, although it didn’t draw me in. What I did like was the character interplay between Morini and Skarstad: the development of the relationships and the humorous asides were quite good. The relationship achieved the goal of demonstrating character growth in both sides: the Erica Morini of the end was not the cold artist we met at the start; she had become a person with understandable drives and goals. Similarly, the Brian Skarstad of the end wasn’t the simple craftsman we met at the start; by the end, Brian was understandable as an artist in his own right. It was this story of people that I liked.

It is hard to tell how much of this lack of “wow” was a fault of the director, Stephanie Vlahos. More of an opera type, her previous production at the Colony was Old Wicked Songs,  which was a similar two-character drama ostensibly about classical music. Both productions came across as classical — measured, slowly building, with exciting and intense passages as well as calming interludes. Vlahos used and moved her actors well, and made them come across as the characters they portrayed. Perhaps that’s all we can ask of a director; they can’t always make an interesting story into a “wow”.

The performances in this were excellent. In the lead positions were Mariette Hartley as Erica Morni, and David Nevell as Brian Skarstad. Hartley inhabited Morini; she was very believable as the eccentric older artist, set in her ways, irrascible, feeling that her time has passed her by and she is in the waning measures of her life concerto. Nevell’s Skarstad came across as the opposite: a likeable craftsman who cared about his family and people, and whose art was often suppressed in service of life. That’s an interesting realization, by the way: Morini was suppressing life for the sake of art, and Skarstad was suppressing art for the sake of life. Anyway, both performances were excellent and a joy to watch.

Supporting these two was a young artist, Geneva Lewis. Lewis is a 14 year old violinist, and provided the background violin music, as well as portraying some students. You never saw her as an actress; only a musician. To my untrained ear, she was very talented. You can see and hear her in this youtube video.

Turning to the technical side, this production was developed by the regular Colony team. Stephen Gifford‘s set, supported by the Property Design and Set Dressing of MacAndME, was very simple: a curtain backdrop, an armoire, a working desk, some furniture. I initially thought this was a reflection of lower budgets at the theatre, but (a) it worked well, and (b) provided the opportunity to create a stunning Carnegie Hall set near the end of the show.  The lighting of Jared A. Sayeg was very effective, especially in the aforementioned Carnegie Hall scene. The sound design of Drew Dalzell was particularly good; at one point, I truly believed the dog barking was out on the street behind the theatre instead of being a sound-prop. That’s realistic sound. Costumes were by Kate Bergh and were effective, conveying the characters well… although I could not understand the large bow they put on young Miss Lewis. Ashley Boehne Ehlers served as Production Stage Manager.

“The Morini Strad” was originally scheduled to close today, but has been extended with six more performances to January 13, 2013. Tickets are available through the Colony Website;  half price tickets do not appear to be available. It is worth seeing, especially as The Colony Theatre can use the support.

An aside or two about the Colony before I close this post out. The Colony has had their troubles large and small. Last night we saw both. On the small side, their box office server lost its motherboard that morning, and they had to do all “will call” tickets by hand without knowing what seats were assigned. This resulted in them seating those patrons holding tickets with assigned seats first, and then filling in the rest. They weathered the storm, figuring out how to sit the audience. Luckily, they didn’t have a sold-out crowd.

Turning to the large problem, it is in that last sentence: they didn’t have a sold-out crowd. We learned shortly before this show that the Colony was having major financial problems. They needed to raise money to put on this show; they needed to raise an order of magnitude more money to keep their doors open for future seasons. We found this disheartening, as we had moved our subscription to the Colony due to the financial woes of the Pasadena Playhouse. The Colony did raise enough funds to put on Morini, and they have sufficient funds for their next show, I’ll Be Back Before Midnight. However, they don’t have enough funds yet to declare the crisis over; they haven’t committed to their last show, nor to the next season.

There are patterns in all this that are troubling to me. First, the Colony is not being upfront with where they are in the fundraising — having a progress meter can go a long way towards getting people to donate. They are not harnessing new media (such as Kickstarter), nor are they seeming to work towards major sponsors for productions or shows. Being transparent about the problem encourages the theatre family to support things. Further, the productions this year have had smaller and smaller casts. These lower the cost of production, but they also don’t necessarily provide the name stories that draw the audiences in. It drastically demonstrates the problems that mid-sized theatres face in Southern California. I think 2013 is going to present us with a hard question about how to fill our mid-size theatre subscription slot. Will we return to the Colony? to the Pasadena Playhouse? to something different like the Geffen or the Rubicon? The mid-sized slot is important — it is where we see the new plays and musicals, the classics and local premieres that we wouldn’t see elsewhere. Stay tuned, I guess.

I’ll note that last night’s show at the Colony came on the same day as the 8th birthday of REP East, and the end of the last show of their 2012 season. I think that the Colony could learn a lot from the REP: how to pick shows that draw audiences in (even to the extent of being local premiers); how to get sponsors for shows; how to have ancillary activities and fund raisers that draw people in and are effective. Contrast, for example, REPs upcoming New Years Eve Midnight Circus fundraiser with the Colony’s fundraiser, an evening of classical music performed by the Lewis family, with Geneva Lewis on violin and her brother and sister on piano and viola. Which will draw the younger audience?

As for us, we’re starting to plan the theatre calendar for 2013. So here goes…

Upcoming Theatre and Concerts:  This week brings two live performance events:  “Judy Collins” at VPAC on December 21, and another intriguing mash-up: “A Mulholland Christmas Carol“  at Theatre of Note on December 22 (this is a combination of A Christmas Carol with the story of the St. Francis Dam disaster). December ends with Other Desert Cities at the Taper on December 29. (I”ll also not we’ll likely see the Les Miz movie on Christmas, followed (of course) by Chinese food).

Turning to 2013… January starts with “Anything Goes” at the Ahmanson on January 6. January 12 is currently held for the MoTAS Shabbat, although I may book something in the evening. January 19 is currently open, as Erin returns to Berkeley the next day; supposedly, there may be an event at REP of interest that evening. January 26 is being held for the just announced production of Triassic Parq–The Musical at the Chance Theatre in Orange County. February will start with the first play of the REP season, “Putnam County Spelling Bee“.  February 9 is being held for “Backbeat” at the Ahmanson. February 16 brings “You’re a Good Man, Charlie Brown” at Cabrillo Music Theatre, and the last weekend of February is currently open. March starts with “I’ll Be Back Before Midnight” at the Colony. After a break for Fogcon (although I may do something here), theatre picks up with “Catch Me If You Can” at Broadway LA/Pantages on March 16 and “Boeing Boeing” at REP East on March 23. March may also bring “End of the Rainbow” at the Ahmanson, most likely on March 30. April will bring the Southern California Renaissance Faire (I’m getting tickets this week through the $15 Holidazzle sale), “Grease” at Cabrillo Music Theatre, and “To Kill a Mockingbird” at REP East. I’m also keeping my eyes open as the various theatres start making their 2013 season announcements. Lastly, what few dates we do have open may be filled by productions I see on Goldstar, LA Stage Tix, Plays411, or discussed in the various LA Stage Blogs I read (I particularly recommend Musicals in LA and LA Stage Times).