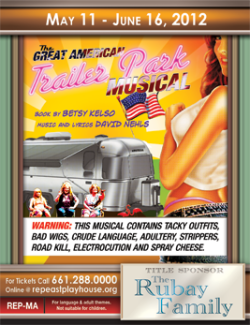 Most of the time, when you see trailer parks, you don’t stop in. You drive on past, oblivious to the goings-on inside. We’ll I’ve got a trailer park that is worth visiting–“Armadillo Acres”, in Starke FL. Now, to make your life a little easier, you can find “Armadillo Acres” in old-town Newhall, right next to a Mexican restaurant.

Perhaps I should explain. “Armadillo Acres” is the fictional setting for “The Great American Trailer Park Musical“, on-stage at REP East Playhouse in Newhall until June 16. In presenting this show, the REP has transformed itself into a trailer park: Pabst Blue Ribbon, tacky accents, tacky dress, and tacky demeanor. It has done this to support a show that itself it tacky, but is also incredibly funny, well performed, and a delight to watch. This show is a hoot–a load of fun performed as only REP can do it.

“The Great American Trailer Park Musical” (book by Betsy Kelso, with music and lyrics by David Nehls) can be enjoyed on two levels. On the top (or should I say “over the top”), it is a celebration of all things Trailer Park and “White Trash”: from the Trailer Park culture itself, with its pregnancy and messy relationships and borderline incest and tackyness, to how that culture is portrayed on television, advertising, QVC, and such. But deeper inside, GATPM is a love story–a story about a couple whose relationship has persevered for over 20 years, and the relationships of those around them with the men in their life. Of course, they don’t quite present it in those words, and the relationships (especially if you’ve seen Jerry Springer or Sally Jesse) may not be what you expect.

At its heart, GATPM is the story of Jeannie Garstecki (Kristen Heitman) and Norbert Garstecki (Jeremiah Lowder): two high school sweethearts (the math nerd (she) and the football jock (he)) who have been together 20 years. After a traumatic incident at the beauty salon, Jeannie became agoraphobic, and hasn’t set foot outside of her trailer for almost 20 years. It is their anniversary, and she has promised Norbert she’ll go outside and he can take her somewhere special–the Ice Capades! This basic story is introduced to us (and carried on throughout the show) by the trailer park equivalent of a greek chorus: the trailer park owner, Betty Burnside (Leslie Berra)–a tall, well-worn gal who has seen everything, especially in this park; “Lin” (Lori D’itri)–short for Linoleum, whose husband is on death row in the Florida Penitentiary; and “Pickles” (Beth Ann Sweezer)–a young woman who wants a baby so bad she has continual hysterical pregnancies. Into this mix is thrown Pippi (Shannon Bouknight), a stripper on the run from her psychotic boyfriend Duke (Luke Barnett). Pippi moves into the trailer park to hide, and Norbert has a wife who has been unavailable for 20 years. You can figure out the rest. Let’s just say that the story plays out with humor both small and large, amplified by stereotypical “white trash” behaviors, and magnified by the hilarious videos projects on screens on the side and the clever music and lyrics.

All of the performances in this production were excellent and each actor has their moment to shine. I walked out of this production going: these guys were perfect–they could sing, they could act, and most importantly, they were having fun on stage and conveying that fun to the audience. There are a few performances and moments I want to highlight. The first is Beth Ann Sweezer as “Pickles”. Sweezer has a smile and a bubbly personality that light up the stage, and was just a joy to watch in every scene she was in. Your eyes were drawn to her as a result (and not just because of the pregnancy belly), and she made the show fun. She also had great comic timing, which was especially demonstrated in her scenes as Tina from Oklahoma City. The second highlight to me was Kristen Heitman. Initially, she didn’t fit my image of Jeannie, but she won me over with her perkiness–and more importantly, her singing voice. She truly shined in numbers such as “Owner of My Heart”, “Panic”, “But He’s Mine”, and particularly “Flushed Down The Pipes” (which had the most hilarious accompanying video I’ve seen in ages). The third highlight was Shannon Bouknight as Pippi. Again, she was having fun with her role (and especially that pole dance!), but man, could this young woman sing. This was highlighted in many of the numbers with Jeannie (such as “But He’s Mine” and “Panic”). Lastly, as Norbert, Jeremiah Lowder, exhibited a gentle charm that was infectious.

The show was directed by Mark Kaplan, who did a wonderful job of bringing out the inner “white trash” of his actors, and making the production come across as natural and fun. Choreography was by Stephen Bailey and was effective for the REP space. Vocal direction was by Leslie Berra. The music was prerecorded (the REP doesn’t really have space for an orchestra, let alone an onstage band), and was not credited in the program.

The production aspects of the show equaled the acting quality. Much credit goes to the regular REP team. Jeff Hyde was back with a spectacular set design that put four trailers on the small stage, utilizing a turntable and other tricks to also provide inside views of the two of them. Art Direction (which likely means helping Jeff with the numerous design and props) were the REP artistic directors, Ovington Michael Owston and Mikee Schwinn. These three transformed the entire REP facility and did a great job of setting the stage. As an aside: this is one thing I love about the REP–the show isn’t just on the stage… for they transform their lobby and bar into a parallel area whose them echoes what is on the stage. The costumes (by Claudia Alexopoulos) and wigs (by Jennifer Alexopoulos) were period-appropriate and (especially for the wigs) appropriately tacky. The sound design by Steven “Nanook” Burkholder was a step above his normal work, with on-actor mics (something one rarely sees at the REP) and appropriate sound effects. The videos (by Jeremiah Lowder and Mikee Schwinn) were period-perfect clips from advertising and TV shows, and augmented the action perfectly. The lighting by Tim Christianson was effective and unobtrusive, and did a great job of setting the scene. Vicki Lightner was stage manager, assisted by Christina Gonzalez.

“The Great American Trailer Park Musical” continues through June 16 at the REP. Tickets are available through the REP Online Box Office. Go see it; you’ll have a wonderful time, and never look at trailer parks the same. Following Trailer Park at the REP are the two shows in the more mature “81 series”: “The Laramie Project” (running July 13-July 28) and “Playdates” (running August 17-September 1).

Upcoming Theatre, Concerts, and Dance: May will end with the production of “Seussical” at Nobel Middle School. I wanted to see “Follies” at the Ahmanson, but that doesn’t look like it will work out. June is more open, but does feature both “Addams Family” and “Million Dollar Quartet” at the Pantages, as well as the Palisades High School mega-picnic and the Wilshire Blvd Temple Camps 60th Anniversary. July features “The Savannah Disputation” at the Colony, “The Laramie Project” at REP East, and “Meet Me In St. Louis” at Cabrillo. August is more open, but will bring “Memphis” at the Pantages and “Playdates” at REP East.  As always, open dates are subject to be filled in with productions that have yet to appear on the RADAR of Goldstar or LA Stage Alliance.