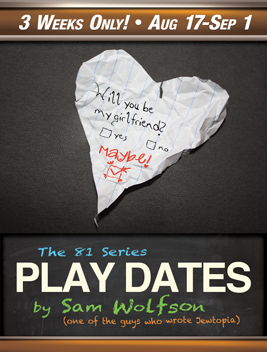 Relationships are hard, and finding the perfect relationship is even harder. We start searching early, and keep on looking and looking. Even when we find a good one, we keep thinking it is dying and we need to more to keep it alive. These notions are at the heart of “Playdates“, a recent play (premiered in 2010) by Sam Wolfson, co-author of “Jewtopia“. The current production of Playdates is at REP East Playhouse in Saugus, which is where we saw the penultimate performance last night. REP, as usual, did an excellent job with the production–which is no surprise. In fact, researching this writeup, I learned that the playwright, Sam Wolfson was so impressed by the first REP take on Jewtopia that he asked them to mount this production personally.

As I indicated earlier, Playdates is a story of relationships and the search for a good relationship. This, at its heart, is the same quest that we saw in Jewtopia, although the approach taken is very different (but equally funny). As the story opens, we meet Sam and Stacey, two 5 year olds on the playground. Even at this age, these two are looking for a relationship that will last more than two hours. They hit it off, and soon Sam has asked Stacey to be his girlfriend. Through a number of scenes we see the arc of the relationship: the tentative start, the growth, the period of learning about each other, the breakup, and the reunion. This is also shown through a wonderful video montage of the growth of the relationship (made even more impressive when you realized that it was specific to the Sam and Stacey in this performance — for the Sam of the last two performances of the show was the understudy). Although expressed in kids terms, many of the jokes and humorous insights have adult resonance that are wonderful. After this is another video montage showing that time has passed (using a wonderful sequence of morphs of Charlie Sheen — always a sage when it comes to relationships). The final scene in Act I shows how this quest has affected Sam as he grew up: he has become “Dr. Love” — a love expert who advises others on their relationships while still hurting from Stacey dumping him at age 5. The “Dr. Love” scene is hilarious and touching and a wonderful commentary on how our youthful relationships shape the adult we become.

In Act II, we are introduced to another couple: Mike and Katie. Mike and Katie have been married for 5 years, and are afraid that the honeymoon period has departed from their relationship. This is demonstrated in the hilarious first two scenes, starting with an elaborate bathroom ballet where they do all sorts of bathroom activities unselfconsciously together — a dance that any long-married couple will both completely understand and find completely absurd…. followed by a post-bathroom bedroom sequence where they realize they haven’t had sex, and attempt to do the deed. To address the problem, they call (who else) Dr. Love, who advises them to do various things to bring back the Honeymoon Period. This includes actually talking to each other, where the seed of an idea of having a threesome is borne. So they go to TGI Fridays to pick up the third, and… well you can guess where it goes from there. Let’s just say that Dr. Love comes back into the picture to save the day, but not in the way you expect. By the end of the production, we learn that an ideal relationship is not necessarily the “Honeymoon” phase, but the phase where you are both loving and comfortable with each other.

In general, this is a very cute take on the story (and very well told). There were a few portions of scenes that could be tightened a little (mostly in Act II, where there was a little bit of cringe-worthy dialogue in the threesome scenes), but overall these didn’t detract from what was a really wonderful and funny show. Looking back, I even think this is a show that could be turned into a small, off-Broadway level musical with simple but cute music (Marcy and Zina would be perfect). The direction at the REP (by Michael C. Kelly) was natural and relaxed, and gave the impression (without being overdone) that these actors were the people who they were playing.

The performances were also top-notch, made even more impressive when you realize that the actor playing Sam at our performance, Nathan T. Inzerillo (FB),  was the understudy, who had only had a little rehearsal and was only doing our show (Friday) and the last performance (Saturday – tonight). Nathan’s characterization of the 5-yo Sam was spot on, and I think many of the men in the audience could see themselves in Nathan’s everyboy. I don’t know what the original actor (Ryan Calberg) was like, but I just loved Nathan in the role. I also found it impressive that you didn’t realize Nathan was an understudy — all the video montages, book covers, and such were made to feature Nathan’s face. That attention to detail is one of the things that makes REP such a wonderful theatre.

As I said, Nathan was great as Sam. Playing off of Nathan was Katie Hall (FB), who was wonderful both as a playful 5-yo girl as well as a grown-up woman. You could tell she was just having fun with the role; it seemed to fit her well.

The other couple, Mike and Katie (who we meet in the second act) were portrayed by Wes Murphy (FB) and Heidi Appe (FB), respectively. These two created a wonderfully believable couple–realistic and loving and playful and hesitant and just a delight to watch. As I noted above, they were particularly wonderful in the bathroom ballet and the subsequent bedroom scene, where they comic timing abilities were brought to the fore — but they were just wonderful on stage.

Rounding out the cast, in various smaller roles, were Kyra Schwartz (FB) (Lisa, Miss Preston, Woman Caller, Wendy), Dennis Hadley (FB) (Timmy, Bill, Jeff), and Dan Fowble (FB) (Paul Pruett, Gym Coach, Walter). Schwartz and Hadley deserve a special mention for their great comic roles as Wendy and Jeff in Act II when they talk about their approach to marriage. It was a joy to watch.

Technically, the production was at the usual “81 series” level, which means there wasn’t as full blown set as is seen in the main production. Still, the set and props (by Mikee Schwinn/FB (set) and Kyra Schwartz (FB) / Christina Gonzalez/FB (props) were effective, especially the wonderful bathroom and bed set pieces in Act II. Augmenting these all were Mikee’s wonderful videos that served both a storytelling devices as well as set establishment tools. Lighting was by REP regular Tim Christianson/FB, assisted by Tom Lund (who also served as stage manager). Sound was by the always-excellent Steven “Nanook” Burkholder. Playdates was produced by Ovington Michael Owston and Mikee Schwinn.

The last performance of Playdates is tonight at 8pm at REP East. The performance may be sold out, but you can see if space is available by calling REP at (661) 288-0000 or purchasing your tickets online. This is also the last performance ever in the “81 Series”; O informed me that starting next season, all performances will be “mainstage” performance. This is wonderful, and shows how REP has grown in reputation and attendence in the community.

Upcoming Theatre and Concerts: Tomorrow night sees us at the theatre again — specifically, we’re seeing “Blame It On Beckett” at the Colony Theatre in Burbank. The next weekend sees me in the Westlake District for “Silence: The Musical” at the Hayworth Theatre. This is a musical version of Silence of the Lambs, and is supposedly quite funny. The following weekend brings “Xanadu–The Musical” at DOMA; I’ve heard the music, and again this is a great parody. The penultimate weekend in September takes us to the Celebration Theatre in Hollywood for the musical Justin Love. The month ends with  “Sherlock Holmes: The Final Adventure” at REP East on September 29. October brings some traveling for family with the bat-mitzvah of a cousin in Fresno, and Karen will be travelling for the Pacific International Quilt Festival in Santa Clara. It may also see us in Berkeley for UCB Homecoming.   Still, what’s a month without theatre, so October will also bring “American Fiesta” at the Colony Theatre, “The Book of Mormon” at Broadway LA/The Pantages, and “1776” at Cabrillo Music Theatre. Continuing the look ahead: November will bring “Moonlight and Magnolias” at REP East, which is booked for the end of the month. It may also bring “Seminar” at The Ahmanson Theatre (still undecided on ticketing) and may bring a concert performance of Raul Esparza at VPAC, especially if Erin flies in for it (he’s singing on her birthday). Non-theatrically, it will also bring “Day Out with Thomas” at OERM (certainly on some or all of Veterans Day weekend – November 10-11). Lastly, to close out the year, December has nothing formally scheduled (other than ACSAC), but will likely bring “Anything Goes” at the Ahmanson, and may bring “Judy Collins” at VPAC. Lastly, what few dates we do have open may be filled by productions I see on Goldstar, LA Stage Tix, Plays411, or discussed in the various LA Stage Blogs I read (I particularly recommend Musicals in LA and LA Stage Times).

Music: The Very Best of the Drifters (The Drifters): On Broadway