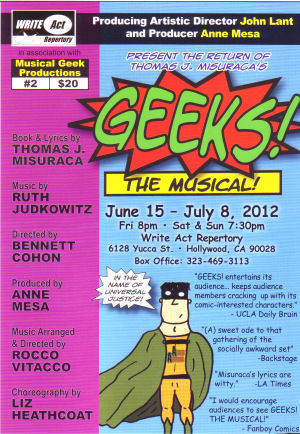 Of all the places to center the action of a musical, perhaps San Diego’s famous ComicCon is the strangest. But that’s the setting of “Geeks: The Musical“, which we saw last night at Write Act Reperatory in Hollywood. What’s even stranger is that… it works. Geeks! is a musical for anyone who has ever been involved with the comic-con crowd, or have known (or have been) someone like that. In other words: it is the perfect musical for me and many of my friends :-).

Geeks! takes the basic elements of common musicals–stories of people who meet and fall in love, stories of characters that grow and learn something about themselves, and tells it in a setting that is both observational and unusual. All of the action in Geeks! takes place at ComicCon (which, for those who are unaware, is a very large comic book and sci-fi/fantasy fandom convention that takes place every summer in San Diego — in fact, the next ComicCon starts July 11, the Thursday after the show closes). It tells the story of two best friends, Jordan (Aaron Nicholson) and Chip (Tyler Koster). Jordan is into numerous TV fandoms, but in particular the fandom that revolves around the Alien Avenger. He also collects comic books, and is specifically looking for Batman #92. Chip, on the other hand, is a Dr. Who fanatic, and is even dressed in costume. While looking for the comic book in the dealer room, Jordan bumps into (and falls in love with) Kerry (Redetha Deason). Kerry is one of those (stereotypical) oddities: a good-looking woman at Comic-Con. She’s also into the Alien Avenger fandom, and is looking for her specific list of comic books. She’s there with her best friend, Emerson (normally Wil Bowers*, but at our performance, Stefan Rich*), a young gay man once into D&D, but now hating everything about Comic-Con (and wanting to criticize it). Emerson serves to interrupt the budding meeting of Jordan and Kerry, so Jordan bribes Chip to distract him so he can ask Kerry out. They agree to meet for dinner after the sessions, but Kerry gets a better offer from Mel Tyler (Dan Woren), the actor who played the Alien Avenger, to meet the original cast. Intersecting this storyline is the story of Alidrina (Juliette Angeli), a goth-girl who writes comic books and loves Dr. Who, who is attending Comic-Con with her best friend, the bi artist Trey (Brandon Murphy). Alidrina and Trey are there to attempt to sell their comic book series, but are having no luck. Things get worse after Trey runs into Emerson, who tells Trey his art is pedestrian. Supporting the story is a “Geek Chorus” of unnamed characters who represent various fandoms, and primarily serve as a backup dancing ensemble. This is the basic story that gets set up in Act I. Needless to say, things resolve themselves predictably in Act II, with the appropriate couples forming, and other characters learning something about themselves. (you can find some good pictures of the cast here)

As a story, Geeks! has its strong and weak points. They story, by Thomas J. Misuraca, does a great job of capturing the sort of characters into the various fandoms, and (for the most part) portrays them realistically — that is, as people and not as frothing fanboys). It is a little stereotypical at times — especially with respect to the image of the scarcity of female geeks — but I could live with that as a plot device for the broader audience that simply does (pause) not (pause) understand. It is peppered with the sort of little details that those of us who are in and know the community would love: the idiotic hypothetical questions we ask, the minutae we remember and debate. What is perhaps a little weaker is some of the characters who are a bit stereotypical in their portrayals (the goth girl, the tortured artist) and some aspects of predictable resolution. The predictable resolution is probably necessary in musical theatre, but I think that if this show wants to move beyond its current “off-Broadway” level to a full-fledged “Broadway” level, some deepening of the portrayals would help.  Still, it is an enjoyable storyline, and one that I would strongly recommend to those who know and love the fandom communities.

A bit weaker are the music and lyrics (by Ruth Judkowitz and Thomas J. Misuraca, respectively). The lyrics are clever and the tunes entertaining during the show, but you don’t walk away humming them. As this musical progresses (which I hope it does), this is one area that could use a little fine-tuning (no pun intended). It may get resolved as the tunes get a broader orchestration. The current arrangements (by Rocco Vitacco) are for a single piano — this works for the small venue that is Write Act Rep, but won’t work for larger venues, and I’m not sure how the current tunes would scale-up with strings and horns. For those familiar with small musicals that appeal to various geek-doms, contrast this with “Brain from Planet X“ or “Evil Dead: The Musical“… or even “It Came From Beyond” (which we saw ages ago at Write Act). These have tunes that stick with you, and are well orchestrated. With a little work, I think the tunes from Geeks! could be in this category. That said, some of the tunes are particularly nice, in particular “A Girl at Comic Con”, “Paint My Rage”, “The Who’s Who of Doctor Who”, “Women in Sci-Fi”, and “Geek to Geek”.

The performance was reasonably well acted. I was particularly taken with the performances of a number of the leads, in particular, Redetha Deason as Kerry, who won me over with both her acting and her singing. She’s been doing this role since the inception of this musical, and is just having fun with the role — and it comes across in her performance. Also enjoyable was Aaron Nicholson as Jordon. He was a bit weaker in voice, but more than made up for that with an endearing performance and personality. Another strong singer was Juliette Angeli as Alidrina — she had a strong singing voice, but her performance didn’t catch me as quick (she was much stronger in Act II). I also enjoyed the performance of Dan Woren as Mel Tyler; he just had a relaxed style that was fun to watch. As Chip, Tyler Koster was notable for his performance of “Who’s Who of Doctor Who” (one of the first songs written for this show); he played a believable sidekick and appeared to be having fun with the role. As our performance we had the alternate Emerson, Stefan Rich*: Rich did a good job with the role, coming across as a bit preppy. I’m curious how the performance of the other actor differs. Lastly,as Trey, Brandon Murphy came across a little stiffer and more strident — perhaps that was his character, but I tend to prefer it when an actor is so comfortable with their role it seems they are their character, as opposed to acting. Again, this improved in Act II where Trey became much more believable as a person.

Supporting the leads was the “Geek Chorus” consisting of Steven Alloway, Jason Beaubien*, Laura Delano, Matthew Frow, Damaris Justamante, James Lui, Te Jay McGrath, and Sebastian Munoz. As a chorus and dance team, they were pretty good (although at times they appeared strongly focused; they need to relax a little and have fun). Of this crew, for whatever reason, something about Laura Delano‘s performance caught my eye. I can’t say precisely what.
[* indicates members of Actors Equity]

Turning to the remainder of the technical and creative team…. the production was directed by Bennett Cohon, who did a very good job for the small production. There were little nuances in the characters and the performances that I truly enjoyed, and usually it was the director that draws those out. If there was an area for improvement, it would be a suggestion to bring out the “fun”: it comes across to the audience when an actor is inhabiting the character and having fun with it, as opposed to concentrating on the acting. Some of these performances had that inhabitation factor, which was great. The choreography, by Liz Heathcoat was fun and effective, but needs a little relaxation. The set by Christopher Scott Murillo was effective for the space and conveyed the Comic-Con nature well.  The lighting by Mark Baker was effective and not distracting. The costumes by Mary Rochon (costume consultant, costume designer for Alien Avenger) and Anne Tamanaha Mesa (producer, asst. director, costumer) were believable for the characters and worked well; one side effect of doing a show about Comic Con is that odd character costumes from old sci-fi movies fit in perfectly :-)). Jonathan Harrison was the stage manager.

“Geeks! The Musical!” continues at Write Act Repertory through next Sunday, July 8 (ending then, presumably, so that the entire time can go to Comic Con the next weekend). The show is fun and I recommend it to folks familiar with the community, or those looking for an enjoyable diversion.  Tickets are available online, and may be available through Goldstar as well. They are also available by calling (323) 469-3113.

Upcoming Theatre and Concerts: July theatre starts with “The Savannah Disputation” at The Colony Theatre on July 7. July 14 brings “The Laramie Project” at REP East. The third weekend in July is open–that’s my wife’s birthday weekend, so it’s up to her where we are going. [ETA: The weekend has been planned. Friday, we’re seeing “Fluffy Bunnies in a Field of Daisies” at the Arena Stage; Saturday we’re going to CSUN to see the OperaWorks production of “Non-Boring Original Opera“, which is an improvised original 3-act opera weaving well-known arias and improvised dialogue into a new storyline.] The last weekend in July brings “Meet Me In St. Louis” at Cabrillo Music Theatre. August has a bit less, as we’re going to have some vacation days and will be taking Erin to start UC Berkeley. We’ve only got one show scheduled: “Play Dates” at REP East. As an aside: we will be vacationing in Palm Springs, so if anyone knows of live theatre going on there in August, let me know. September activity resumes, beginning with “Blame It On Beckett” at the Colony Theatre on September 1 and “Sherlock Holmes: The Final Adventure” at REP East on September 29. I”m also looking into “Silence: The Musical” at the Hayworth Theatre, which starts September 8 and runs through December, and “Xanadu” at DOMA, which starts September 7 and runs for about 3 weeks. October brings some travelling for family: the Cal Parents Weekend at UCB, and the bat-mitzvah of a cousin in Fresno. It will also bring “American Fiesta” at the Colony Theatre, and “The Book of Mormon” at Broadway LA/The Pantages. Continuing the look ahead: November may bring “Seminar” at The Ahmanson Theatre (still undecided on ticketing), and will bring “Moonlight and Magnolias” at REP East. It will also bring “Day Out with Thomas” at OERM (certainly on some or all of Veterans Day weekend – November 10-11-12). November  may also see us at VPAC for Raul Esparza, especially if Erin flies in for it (he’s singing on her birthday). Lastly, to close out the year, December has nothing formally scheduled (other than ACSAC), but will likely bring “Anything Goes” at the Ahmanson, and may bring “Judy Collins” at VPAC.Lastly, what few dates we do have open may be filled by productions I see on Goldstar, LA Stage Tix, or discussed in the various LA Stage Blogs I read.

One Reply to “They Sing! They Dance! They Love Comic Books!”