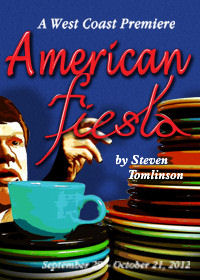 Last night, we saw a play about China. Well, not exactly China. Dinnerware. To be specific, last night we saw the play “American Fiesta”  at the Colony Theatre in Burbank. The primary subject of American Fiesta is Fiesta dinnerware (often referred to as Fiestaware), a line of colorful household china produced by the Homer Laughlin China company since 1936. Collection of the original patterns and colors is for many an obsession; the protagonist of American Fiesta is such a collector.

However, the protagonist of American Fiesta is much more. He is a representation of the author of the play, Steven Tomlinson. In fact, in the original productions of the play from 2007, the protagonist was played by Tomlinson. In addition to being an avid collector of Fiestaware (and obviously, a playwright), Tomlinson is a PhD in Economics and an adjunct professor of pastoral ministry at an Episcopal Theological Seminary. American Fiesta is a one-man show where Tomlinson talks about his Fiesta collecting obsession and how it started. But it is much more than that. Tomlinson uses Fiestaware as a metaphor for discussing the evolution of his relationship with his boyfriend, Leon, and how this relationship plays out with his conservative Oklahoma parents. He also uses it as a political metaphor, relating how the brain obsesses over Fiestaware to how companies manipulate voters with slogans that play on strong feelings, just as Fiestaware draws people in with strong colors and strong memories.  Ultimately, Fiestaware serves as a way to bring out people’s stories, and Tomlinson’s message is that by listening to stories, and bringing the different colors together, you can create something harmoneous. All of this is brought together in an 80-minute, one-act, one-man show.

Does it work? For the most part, yes (and when it doesn’t, oh, look at the pretty colored china). The script has the actor playing a number of different characters and voices: himself, his fiancee Leon, his mother, his father, the owner of an antique shop in rural Oklahoma, and many others. It also has the actor bringing together the various threads of points together: the collection, the electoral politics, and the politics of gay relationships in the conservative Southwest. The story does this relatively effectively (although I’m not sure it could sustain the interest much longer than the current 80 minutes). It is helped along the way by the colorful china, and more importantly, by very effective graphic projections that serve to set the location and frame particular narrative points. It is also helped by the way the director, David Rose, brought out the different characters in the stories through the movements, mannerisms, and voices of the actor.

There is also another primary reason why American Fiesta works: the lead actor, Larry Cedar*. Cedar does a great job of embodying a large number of different characters, and truly makes you believe he is a gay obsessive collector of colorful china, living in a hipster area in Texas, and regularly driving to Oklahoma to see his parents. In many ways, it is the skilled acting of Cedar that makes this play a success: he is fun to watch and does a great job of drawing you into the story.
[* indicates member of Actors Equity]

Turning to the technical side of things: The scenic design by David Potts is relatively simple: a large number of shelves and two movable tables, augmented by three large flat-screen monitors. These are filled over the show by a large collection of colorful Fiesta bowls, plates, pitchers, cups, and other assorted pieces, all assembled by Colony-resident prop-master MacAndME. The video projections, designed by Dave Mickey and Kristen Campbell (who has no narrative bio in the program), serve very well to set the scene and move the story along. Amplifying the color of the china is the colorful lighting of Jared A. Sayeg, which seems to emphasize the colors of the china. Sound effects are provided by David Mickey (who possibly also did the aforementioned projections).  Costume design was by Kate Bergh. Also deserving of credit is the stage crew, Andrea Dean and Cuyler Perry, who quietly move all the china on and off the stage. Brian Cordoba was the production stage manager.

Upcoming Theatre and Concerts:  Next weekend we won’t be able to see any theatre, as we’ll be dealing with family business. The last weekend of October makes up for it with two productions: “The Book of Mormon” at Broadway LA/The Pantages on 10/27, and “1776” at Cabrillo Music Theatre on 10/28. November is much lighter in terms of theatre. At the beginning of the month, my wife will be going to VPAC to see Ballet Folklorico (but you probably won’t see a review here). That weekend may also bring “Seminar” at The Ahmanson Theatre (still undecided on ticketing; another possibility is “Ruddigore” at the Sierra Madre Playhouse), although that is increasingly unlikely. The following weekend won’t be available for theatre, as we’ll be out working at “Day Out with Thomas” at OERM. The next weekend sees us at VPAC for a concert performance of Raul Esparza. November will close with “Moonlight and Magnolias” at REP East. December has no theatre currently scheduled (other than ACSAC), but will likely bring “Anything Goes” at the Ahmanson. It will also bring another concert: “Judy Collins” at VPAC. Starting the look into 2013. Currently nothing is scheduled for January, but that’s sure to change as REP announces its dates for the 2013 season. February brings “You’re a Good Man, Charlie Brown” at Cabrillo Music Theatre and “I’ll Be Back Before Midnight” at the Colony. It may also bring “Backbeat” at the Ahmanson. March will likely bring “Catch Me If You Can” at Broadway LA/Pantages. I’m also keeping my eyes open as the various theatres start making their 2013 season announcements. Lastly, what few dates we do have open may be filled by productions I see on Goldstar, LA Stage Tix, Plays411, or discussed in the various LA Stage Blogs I read (I particularly recommend Musicals in LA and LA Stage Times).

2 Replies to “A Colorful Life”