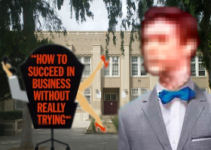 Our theatre this weekend was at the hyperlocal level: We were at Van Nuys High School to see the final production of the 2012 school year: “How to Succeed in Business Without Really Trying“. This was the final performance of the cohort of kids that entered Van Nuys with our daughter, so we know many many folks in the cast. How did Van Nuys do? Pretty good, for a high school production. This wasn’t quite up to last year’s Evita, but I think that is partially due to the story, and mostly due to music problems. On the acting level, the show was pretty good.

“How to Succeed in Business Without Really Trying” (henceforth, H2$) is perhaps the most successful business musical to succeed in the early 1960s (when there was a bunch of such musicals, including “How Now Dow Jones” and “Let Em Ride“, both big failures). It was written by Abe Burrows, Jack Weinstock, and Willie Gilbert, based on Shepherd Mead‘s 1952 book of the same name. It had music and lyrics by Frank Loesser. It opened on Broadway in 1961 with Robert Morse in the lead, was made into a movie in 1967, had a successful revival in the 1990s with Matthew Broderick, and is currently in a 2nd revival on Broadway, first with Daniel Radcliffe and now with Nick Jonas.

H2$ tells the story of the rise of J. Pierpont Finch from a lowly window washer to chairman of the board, all in a very short time thanks to a very little book. Along the ascent, the show skewers business as it was in the 1960s… from the girls in the steno pool wanting to marry their boss, to doing things the “corporate way”, to the closed-in culture of business at the time. The show is extremely set in the 1960s — I was noting that many of the jokes would not be recognized by a teen audience (such as an advertising executive with the initials BBDO, to a reference to a club for the diners, and so on). A detailed synopsis can be found on the Wikipedia page.

Van Nuys did a reasonable job with the show. Perhaps the weakest point was the orchestra, which had a number of out of tune instruments that were painful to hear. The second problem is something inherent in a high school production: some of the kids are better singers than the others. In general, the seniors in the production could sing quite well — this included actors portraying Finch, Smitty, Bigley, and Ms. Jones. The younger actors were more spotty: mostly they sang good, with the occasional off note. The talent is there, so I’m sure they will get better as they do more shows (we’ve seen this happen with the current crop of seniors). The last problem with the show was the directions: there was an overuse of the hands with gestures as people talked and sang. This is something you notice when it goes beyond natural movement, and is quite common in stage productions.  There were also some microphone problems, especially in the second act where the microphone for the solo in the last big number went out completely.

Van Nuys also made some minor changes in the script due to casting– in particular, they cast B.B.D.O. as a woman, and had some women executives in the washroom scene and the final scene. This was likely due to the availability of cast members, but was jarring. Business in the 1960s was extremely sexist: there were few (if any) women executives. Women were secretarys; men were executives. In fact, women executives were viewed with suspicion. The purpose of this show was to highlight and exaggerate this sexism; thus the women executives were incongruous and distracting.

As I said before, the actors did really good (especially considering that this was a high school production). The seniors (designated with *) were particularly good. In the lead positions were Sean Scott* as J. Pierpont Finch and Sophie Taylor as Rosemary Pilkington. Scott was very good as Finch — good singing voice, a playful boyish quality. He needed just a bit more impishness to be perfect. Taylor was pretty good as Rosemary — she had a few off notes, but her acting was spot on and she had the lovability needed for the character. She could do with a little more visibility of the inner hardness and drive. Her character in the story is attracted to Finch because she is equally calculating and focused on getting her goal, only her goal is different. Seeing that drive is critical. According to her bio, this was her first play at Van Nuys, so I’m sure she will be getting better and better as they years go on and her talent is honed.

Shows of this era had a comic second tier. Playing these roles in this show were Erin Geronimi* as Smitty and Dominique Bautista as Bud Frump. Geronimi was very good as Smitty: she had the comic timing down pat, sang well, and acted well. I particularly enjoyed how she handled Been a Long Day. Bautista was reasonably good as Frump. He had the singing down well, but Frump is supposed to be a true comic character (the originator of the role was Charles Nelson Reilly). Bautista needed to be a bit more playful and clownish, but hopefully those skills will be honed as he does more roles. According to his bio, this was his first play; given that, his performance was remarkable for what it was.

There are a number of featured players in this show. A Van Nuys favorite, Quest Sky Zeidler*, was playing J. B. Biggley. We’ve seen Quest grow in his skills since his middle school days as a wolf. He handled Biggley well — the singing, the acting, and the dancing. I’m sure we will be seeing him go on to do great things. Also strong was Ariel Kostrzrewski as Hedy LaRue. Initially, I wasn’t sure she had the right look for LaRue, but her performance sold me that this was a great role for her (and with a bit more padding, she would have been perfect). Also notable was Vivian Cermeño who got the featured spot in Brotherhood of Man. Even with the microphone problems, you could hear the quality and power of Ms. Cermeño’s voice. Cermeño is a freshman, so I’m sure that Van Nuys will have some really good productions in the next two years as she matures in vocal and acting qualities. Lastly, Jade Field did good as Ms. Jones, particularly in the first scene she has with Finch. She was also hit with the microphone problem in the last big number.

Turning to the technical side. The sets, which worked reasonably well, were constructed by Mr. Tom Kirkpatric and his students, based on a design from the University of Missouri. There were some anachronisms, but finding 1960s props is getting harder and harder. Sound and Lights were provided by Mr. Marque Coy and his team, including Jessica Andrade, Kenji Kang, Sierra McDuffee, Marion Paguio, Clarissa Tangloa, and Karina Vega on sound and Joshua Nicolas, Kacie Rodriguez, Joseph Tarfur, Kevin Vasquez, and Marelen Villalta on lights. Sound was OK in the first act, but had problems in the second. Lighting was more naturalistic (i.e., white), but I don’t know if this was a directoral choice or a reflection of new lighting people (I miss the days my daughter was doing lighting–she had some great creative talent there). Alicia Ryan Lee was Stage Manager, assisted by Gabriel Dominguez and Leisa Duya.

The Orchestra was led by Mr. Robert Eisenhart and Mr. Brian McGaffey and had lots of people that I’m not going to list. They made a valiant effort with the difficult score, was had problems due to some out of tune instruments (in particular, it sounded like there was a problem with the violins). I did appreciate that attempt to get a typewriter sound effect during A Secretary is Not a Toy, but they needed to be a bit stronger on the electric razor effect for I Believe in You (which could also have benefitted from electric razors on the stage).

This is likely the last Van Nuys HS drama department production we will see. Over four years (actually a bit more, as we saw one production when Erin was in 8th grade) we’ve seen this program become bolder and attempt harder and harder works. From the overdone “Grease” to works such as “Damn Yankees”, “Evita”, and now “H2$”, we’ve seen Van Nuys try things that most high schools do not do. We’ve seen students grow as actors and singers. Van Nuys HS has an underappreciated drama program, and the community needs to applaud these hardworking students and staff members for what they do. It’s not always perfect, but hey, this is high school.

Upcoming Theatre, Concerts, and Dance: Next week sees us in West LA for “New Jerusalem, The Interrogation of Baruch de Spinoza at Talmund Torah Congregation: Amsterdam, July 27th, 1665” at the Pico Playhouse. March continues with “American Idiot” at the Ahmanson, and “Journey’s End” at REP East. March will conclude with Tom Paxton in concert at McCabes on 3/31. Continuing the look ahead, April will bring “Billy Elliot” at the Pantages, the Southern California Renaissance Faire, “Once Upon a Mattress” at Cabrillo, and “Dames at Sea” at the Colony.  May will bring “The Great American Trailer Park Musical” at REP East, the senior dance show at Van Nuys HS, and may bring “Heiress” at the Pasadena Playhouse, “Follies” at the Ahmanson, and the Spring Railfestival at Orange Empire Railway Museum. As always, open dates are subject to be filled in with productions that have yet to appear on the RADAR of Goldstar or LA Stage Alliance.

Music: Its Gonna Be Fine (Glenn Yarborough): I Hate To See The Sun Go Down