Telling a Story Through
Highway and Planning Maps

Figure 3-1 shows the 1963 state highway definitions for Los Angeles and Vicinity. In this, the routes of many of the planned freeways can be seen with their legislative route numbers (the numbers in squares). Of particular interest are the routes shown with open circles or open dashes. Below is another image showing the full freeway and expressway system planned in 1963, from the March/April 1963 issue of CHPW: 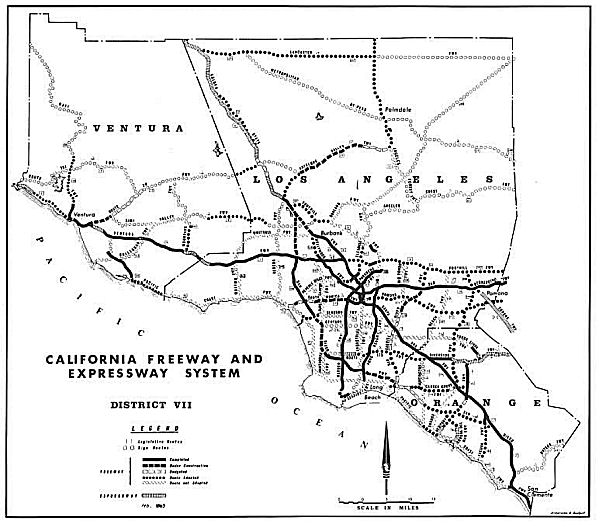 Here are some correspondences:

The plan continued to change and evolve, resulting in the 1965 Freeway and Expressway plan adopted by the state. This plan is illustrated in Figure 3-2.

There are some differences between the 1963 plan and the 1965 plan. Most notably absent is the East By-Pass. The Venice Freeway is also gone.

By 1979, a system approximating the current system was in place. In Figure 3-3, you can see how a number of routes had been eliminated from consideration for construction. In particular:

Figure 3-4 shows the Los Angeles highway system as of 1986. Routes shown with routes in open circles were never adopted. The lines with open dashes are currently under construction or construction is planned.

Figure 3-4 shows a 2003 map, prepared by Caltrans, of the current system status:

The following maps scanned in by others also provide information on Southern California highways: