Telling a Story Through
Highway and Planning Maps

The freeway era in Southern California started with the construction of the Arroyo Seco Parkway in 1940. This route, which was part of US 66, is now the Pasadena Freeway, Route 110. Since the creation of the route, regional planners have been working towards the goal of a comprehensive regional freeway and expressway system.

Freeway planning for the region started with the report "Freeways for the Region" from the Regional Planning Commission. This presented the original plan for a regional system of freeways. According to the foreword of the report, the plan was developed "in fulfillment of an order of the Los Angeles County Board of Supervisors, given on July 13, 1936." It talks about five routes as the nucleus of the plan (the following is a quote from the report): 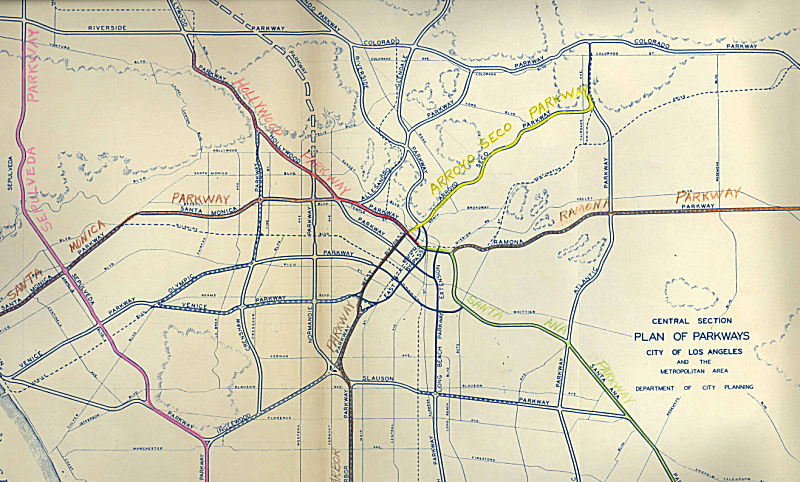 Figure 1-1 shows the 1947 Master Plan as developed by the Regional Planning Commission. Others also were preparing plans at this time; Figure 1-3 shows the proposed Parkway System developed by the Auto Club of Southern California. There was also a complete 1946 Report: "Interregional, Regional, Metropolitan Parkways in the Los Angeles Metro Area" This plan (Figure 1-4) recognized the upcoming freeway system. The interstates were referred to as the "United States Interregional Highway System", and included five Southern California routes:

The State Regional System was also acknowledged. It noted of the routes listed, 67 miles were included in the State Division of Highway's list of critical parkway projects needed in the immediate future: 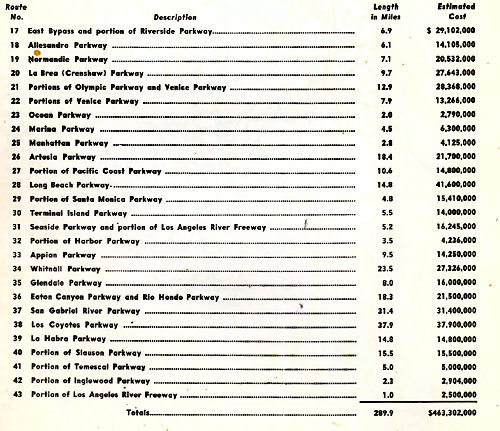 As one can see, the plans were roughly similar, but had some distinct differences. Some of the routes on these plans correspond to existant highways today; some correspond to highways still on the books (as of 2000) but never constructed, and still others were only dreams of the planners. Even when planned, not all routes were in the state system. Here are some comments on how these plans compare to today's routes, as a baseline (alphabetical order):

Part 2 continues with how these routes morphed in the 1950s.

Return to Stories and Maps Home