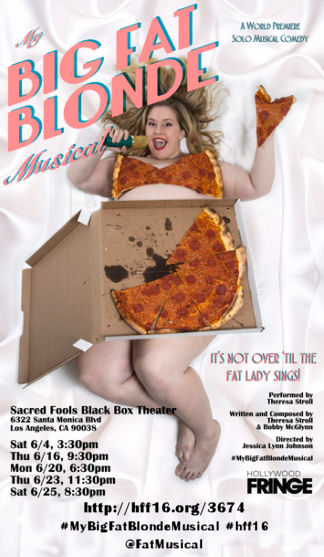 OK, perhaps my taste in women is coloring my reaction to this musical. After all, if you know the women I dated (as well as the one I eventually married), you’ll know they all fit one particular mold.

No, not that mold.

They were all natural women who were comfortable in their bodies, who didn’t accept how society told them they had to look or had to behave, and who didn’t taken nothing from nobody.

(Excuse me while a song from Tom Paxton runs through the brain: …)

All over this great big city,
Can’t find a woman who’s nice and pretty.
They all look like a page in a magazine.
Legs are long and they eat like a sparrow.
Figures stick to the straight and narrow.
Top and bottom are the same as in between.

[Cho:]
Show me a pretty little number,
When she walks, she rolls like thunder,
Eyes as deep and dark as the deep blue sea.
Round right here and round right there,
Pretty red lips and her very own hair,
Wrap her up, she’s the natural girl for me.

OK, digression ended. Back to the Hollywood Fringe Festival (FB), where yesterday evening we saw our last show in the Sacred Fools (FB) Black Box space:  My Big Fat Blond Musical at 8:30pm.

My Big Fat Blond Musical, which was written, composed, and produced by Theresa Stroll (FB) and her finace, Bobby McGlynn (FB), and performed by Stroll, is the story of Stroll’s experience in Hollywood, where she moved from Connecticut to pursue a dream of being an actress. Unfortunately, she found out that Hollywood — in particular, the TV and Film industry — doesn’t have a liking of large (well, fubsy, well, fat) women, except as comic relief and the girl that never gets the guy. She did eventually find an answer to her problem — I’m not going to say it is the answer — but more on that later.

Throughout the show, Stroll relates her story portraying multiple characters along the way: an Austrialian actress working in a bar, her manager at Starbucks, a talent manager, and so forth. She had a particular point to make about the burden of student loans and how the loan companies start making demands to get their money back even before the student has begun to achieve their earning potential. This, as a dad of a recent UC Berkeley grad, scares me a little, although it is a little reassuring to know that her loan total is only the amount of a compact car.

Throughout the show, there are a number of songs and dances that convey the points of the accompanying scenes. Stroll sings these very well (there were only a few minor reaches), but one or two of songs themselves could use a little work if they were to survive out of the show. On the other hand, some were excellent — “Carbs and Oils” was a great parody of Modern Major General, and “Fuck It!” could be the anthem of many people that I know.  They do have a demo recording of the songs available for a PayPal payment of $2 to fatmusical@gmail.com.

By the end of the story, Stroll has found the avenue to success, and it is reminiscent of the will in A Class Act: she decides to tell Hollywood to F-it, and take control of her own destiny… and one aspect of this is creating a musical… which is, you guessed it….

I think the message that this show imparts is a great one: Don’t wait for destiny to come to you, go out and make your own destiny. It is one that is true for fat or thin actors, but especially true for actors that don’t fit the normal stereotypical molds of Hollywood and the TV and film industry. I’d say that we’re lucky that the theatrical stage is more diverse… but is it?

Stroll, in this show, touches on that last aspects of acceptable discrimination. We can no longer discriminate based on sex, race, creed, color, orientation, gender identification, religion; however, being fat or large — that you can make fun of. That’s wrong. We’re seeing some increasingly popular viral campaigns expressing that view — that what we need are real sizes and real people. (That’s one reason I supported The Nu Project (FB) — for it has a great message — all women are beautiful). But Hollywood and related acting professions (i.e., stage) still view the world through a narrow lens of shapes, sizes and colors. Fringe festival is beautiful because it allows celebration outside that boundary — whether “big boned”, “big chested”, or just “big opinioned”. Fringe embraces the wide variety of theatre in all its natural values from the one person to the ensemble, from the loosely scripted to the tightly scripted, from the polished to the not, from the… well you get it.

This is why Theresa Stroll’s piece is so important to be seen: to make us aware of the discrimination in the industry. Why can’t we have a show (other than Mike and Molly, which although it had the premise, was painfully flawed in execution) where the large girl gets the guy and is treated no different than the skinny girl that gets the guy (i.e., no jokes about size)? Why can’t we cast size diverse as well as color diverse? Why must the only role for fat be funny?

If you haven’t figured it out by now, I truly enjoyed this piece (as did my wife).

The production was directed by Jessica Lynn Johnson (FB), who is not from Australia but from St. Louis (but those midwest accents are difficult 🙂 ). Choreography was by Lindsay Braverman (FB). Rebecca Schoenberg (FB) [any relation to Larry?] was the stage manager. There were no credits given for lighting or sound or projections, but all worked very well in establishing place and mood.

Alas, we caught the last performance of My Big Fat Blonde Musical. I have heard rumors that it might be extended with a few shows, so keep checking their ticket page or follow @FatMusical  on Twitter for updates.

As a PS for this: We need to get some producer to follow this up with a production of Pretty Faces: The Large and Lovely Musical (FB, Amazon) at the next Fringe Festival. Vocal selections are available, but I can’t find licensing info. It looks like you contact the author.