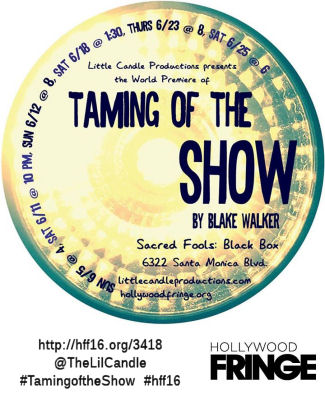 Those who have been paying attention this month may be wondering where this show came from? After all, it wasn’t on our original schedule of 15 shows; it wasn’t even on the list of shows of interest for the Hollywood Fringe Festival (FB). Those wondering would be correct. This show was added at the last minute, when we realized we had a three hour break between our two Saturday days, which were at the same theatre. This looked interesting, and it was at the same theatre — and so, for the first time, we had three consecutive shows in the Sacred Fools (FB) Black Box space: Squeeze My Cans at 4pm, Taming of the Show at 6pm, and My Big Fat Blond Musical at 8:30pm.

In the manner of productions like Kiss Me Kate, the focus of Taming of the Show is less the Shakespeare production itself than the meta-story of the making of the production. And, as in KMK, that “making” is going all wrong. In the case of Taming/Show, you have a maniacal director (Montana Stanislavski) who has a conception of the show as a time-travel story: an astronaut goes back to pre-historic times where mankind is living with dinosaurs. Think Flintstones, but with more grunting and less technology. OK, don’t think Flintstones; think It’s About Time. You have a lead actor (Brayden Stryker) who has an over-inflated sense of self, whose peak was being on the CW, and who uses drugs and sex to get by and a lead actress (Annie) who doesn’t want to have anything to do with the lead actor. You have one additional actor (Ronald Jeremy — and yes, they called him that) who played most of remaining male roles (and some female ones), and one additional actor (Betty Turnipseed) who played most of the remaining female roles (and some of the male ones). You have an aged stage manager Hilary Nikademus, and a former student of his drawn into being assistant stage manager, Eddie Littlejeans. Oh, and this ASM is recovering from theatrical tourettes, where he breaks out in song at any inconvenient moment.

What could go wrong?

Oh, and I forgot: there is a strong theme of forbidden love — the love that must not speak its name. That’s right: the love between someone in the crew and someone in the cast. Naturally, in this case, the tension isn’t just created with the show: Eddie falls in love with Annie, who is also the object of lust of the lead, Brayden. Annie wants nothing to do with either of them.

Now wind it up and let it go.

This isn’t Broadway-caliber writing folks. This isn’t even Colony-caliber writing. That’s not to say the show was bad. It was just not deep; it wasn’t complex. The characters were lightly drawn and boxed into particular tropes and roles. The humor was broad and broadcast. The show was funny and made you laugh, but then you felt guilty for laughing at such an obvious and broad joke. These problems can be laid squarely at the feet of the author, Blake Walker (FB) — and it appears they were intentional. The show notes indicate that the original production (this started when Walker was in college at SMU) was intended as a comment on the state of the theatre department there, and has been refined to embrace the tropes, cliches, frustrations and experiences found in the real world. Translating that, it means that this show was intended more as a parody and less as a real show — and parody is by its nature broad and cliched.

The performances were reasonably good and fit the materials — that is, the stereotypes and tropes — well. In the lead positions (at least from my point of view) was Jeff DeCrosta (FB) as Eddie and Chineze Enekwechi (FB) as Annie. DeCrosta gave a very affable and friendly performance; just a nice guy you wanted to succeed. I don’t judge these things, but my wife thought he was good looking.  He also had a very nice singing voice with only the occasional overreach. Enekwechi’s Annie was similarly accessible and friendly, and the actress just had a lovely face that was a delight to watch. I also kept detecting a slight sense of a lovely accent to her voice.

Steve Peterson (FB)’s Hilary Nikademus had an odd creepy cryptkeeper vibe to him, which was likely due to his makeup. This made the ending of the show a little hard to visualize, but then again, it takes all types. Peterson’s Nikademus had this aura of “been there, seen this, I don’t need another T-shirt” that was quite interesting.

The two “professionals” (at least in terms of the story) were Marc Forget (FB) as Montana Stanislavski and Greg Steinbrecher (FB) as Brayden Stryker. Both captured their stereotypes well: Forget as the overboard director more obsessed with his ego than the production, and Stryker as the celebrity actor more obsessed with his ego that …. well, you get it.

Rounding out the cast were Paula Deming (FB)’s Betty Turnipseed and Anthony Pappastrat (FB)’s (Ronald Jeremy). First and foremost, I should note that Pappastrat’s portrayal of Jeremy was nothing like that other Ronald Jeremy. Pappastrat had the character with the most physical comedy of the ensemble, and he handled it well. I liked Deming, but I was confused as to what age she was portraying. She seemed to have both young and old aspects. Still, she was quite fun to watch.

The music was by Blake Walker (FB) and Michael Turner, and was provided by an on-stage upright piano — which must be a pain to load in/out for Fringe. Some notes were off, and there were times where the cast that sung (i.e., “Eddie”) had trouble reaching the notes of the lyrics.

The production was directed by Blake Walker (FB), assisted by Karissa McKinney (FB). Rebecca Schoenberg (FB) [any relation to Larry?] was the stage manager. Billy Gill (FB) was the onstage accompanist, with Todd Collins (FB) providing the fight choreography. Props and costumes were by Lynn Downey Braswell (FB). In general, the props and costumes worked well, modulo the cryptkeeper hair. Taming of the Show was presented by Little Candle Productions (FB).

We caught the last performance of Taming of the Show. If encore performances get added, they will be listed (and available to ticket) through the show’s ticketing page. This was a silly show, not deep, but situationally funny and enjoyable.