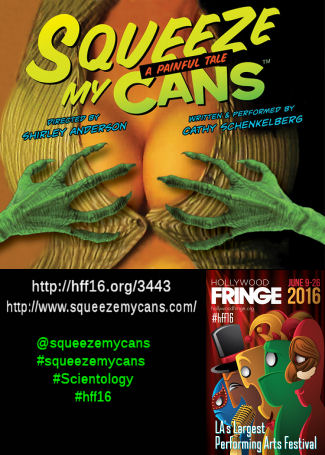 That last question is a really important one.

Squeeze My Cans (HFF16, FB), which we saw yesterday afternoon as part of the Hollywood Fringe Festival (FB), is one woman’s story of how she got drawn into the tar-baby that is Scientology, how she worked her way into the upper tiers of the religions, and how she eventually escaped its grasp. Not only did this effort take more than a decade, it decimated her finances.

Again, I’ll ask what is a church, and what is a cult? But don’t answer yet — after all, I wouldn’t want to draw the wrath of Scientology down upon me.

Now, coming in, I knew a little more about Scientology, primarily because I had listened to A Very Merry Unauthorized Children’s Scientology Pageant (you can listen too) [As an aside: it has been years since that show has been done in LA, and it would be ripe for a revival at a future Fringe]. I know about Scientology’s notion of Thetans and Xinu and ideas about aliens that sounded like they had been lifted from a science fiction novel. But that’s about all I knew.

I found Cathy Schenkelberg (FB)’s story about her interactions with Scientology scary and fascinating. Her manner of telling the story brought just the right amount of humor and humility to counter the horror of it all. She drew me (and the rest of the audience) in, and just held our attention rapt for a very fast paced and packed 80 minutes. Looking at it from the outside, it was easy to see the cult-ish signs: the constant demands for money, the taking out of loans for classes and to move up levels, the control over the life, the isolation from the outside world and outside voices. It is chilling, but it is even more chilling the mind games that the Church played so that those inside never realized it.

But you know what is even more scary? The fact that the Church is still out there doing it, drawing people in with their celebrities and influence. Even more scary than that? A number of the evangelical groups within our accepted religions (Judaism, Christianity, Islam) are doing just that. Where do you think the radicalized religious fanatics come from? Programs that use the same techniques as Scientology.

But why did this touch me so? Because I remember the days of cults first-hand. I remember the Moonies on college campuses, and the large meetings where they would attempt to recruit and draw people in.

The presentation in Squeeze My Cans was not only performed by Schenkelberg, it was written by her based on her experience, developed over years. It was directed by Shirley Anderson (FB), with lighting design by Brandon Baruch (FB) and Sound Design and Projections by Toy Deiorio (FB). The direction, lighting, and sound faded into the background — as they should — because Schenkelberg’s story and performance was just so engrossing.

There is one more performance of Squeeze My Cans at the main part of the Fringe Festival: today (Sun 6/26) at 8:00PM. Tickets (if not sold out) are available through the Fringe website. It may be extended with a few more shows in July; that will be announced tonight. Performances take place at the Sacred Fools (FB) Black Box. Check their Fringe Page for updates. It will also be presented the latter half of July as part of the Solo Celebration in Chicago. Go see this, and learn about the danger that is Scientology.