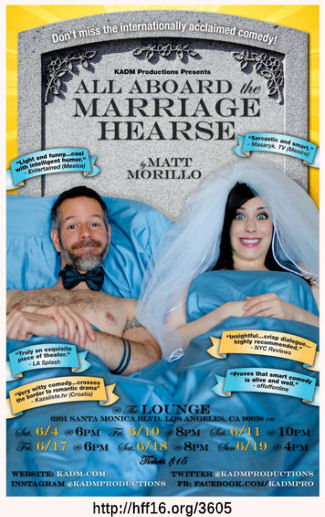 Closing out our third weekend of the Hollywood Fringe Festival (FB) was yet another demonstration of the range that is Fringe. This time, it was a fully realized one-act play — All Aboard the Marriage Hearse — about the institution of marriage. The quality was definitely not Fringe — this was a play that could work on any intimate stage in town.

Here’s the description from the Fringe catalog, which is as good a synopsis as any:

Sean and Amy are your typical co-habitating, Catholic/Jewish, thirty-something couple living in Manhattan. They work hard, love each other and share common goals in life. Well, sort of. After nearly four years together, Amy wants to get married but Sean does not believe in the institution. The game is on!!! Tonight is the night when they will settle the marriage question once and for all. They will both bring their “A” game and the gloves will come off. Sean will try to talk her out of it. Amy will try to talk him into it. Will they break up? Will they keep going on the path they’re on? Will they climb aboard the “Marriage Hearse?”

Author Matt Morillo (FB) uses the play to discuss the value of marriage. Sean strongly does not believe in the institution: he feels it is artificial life support for a relationship, a historic construct with no meaning. He’s willing to commit, for today, for a long term relationship. But make it official in the eyes of the world — nope. Amy, on the other hand, was raised to believe in the value of marriage, and she believes the relationship is at the point where Sean needs to, essentially, put up or shut up.

The resulting argument brings up many interesting points about relationships, and how any why we commit to each other.

If I had any suggestion for the author, it would be that I would want a bit more. To me, the conclusion leaves me dangling. I’d love to see a short second act with the same characters that explores where they are in relation to each other 20 years down the road. What it is the long term impact of their decision: was it the right one or the wrong one. It could be just the thing to flesh this into something fuller and deeper.

The performances were excellent. Tom Pilutik (FB) as Sean, and Jessica Moreno (FB) as Amy have a natural chemistry together; it is easy to believe them as a long-term couple. They just have a comfort with these roles and characters that comes across in their performances. There’s fire when required, but there’s also softness and playfullness. They are just fun to watch.

Tom and Jessica’s performances are augmented by the direction of the author, Matt Morillo (FB), who uses his familiarity with the piece to add to the comfort. There are no real credits for lighting or sound; the lighting in general is naturalistic. Costumes, again, are relatively simple (and now I know what Spanx look like 🙂 ). Erica Lawrence (FB) was the stage manager.  All Aboard the Marriage Hearse was presented by KADM Productions (FB) and produced by Joanne Hartstone (FB).

Alas, we saw the last Fringe presentation of All Aboard The Marriage Hearse. You can vote for the show for awards, and perhaps it will come back for an encore performance.